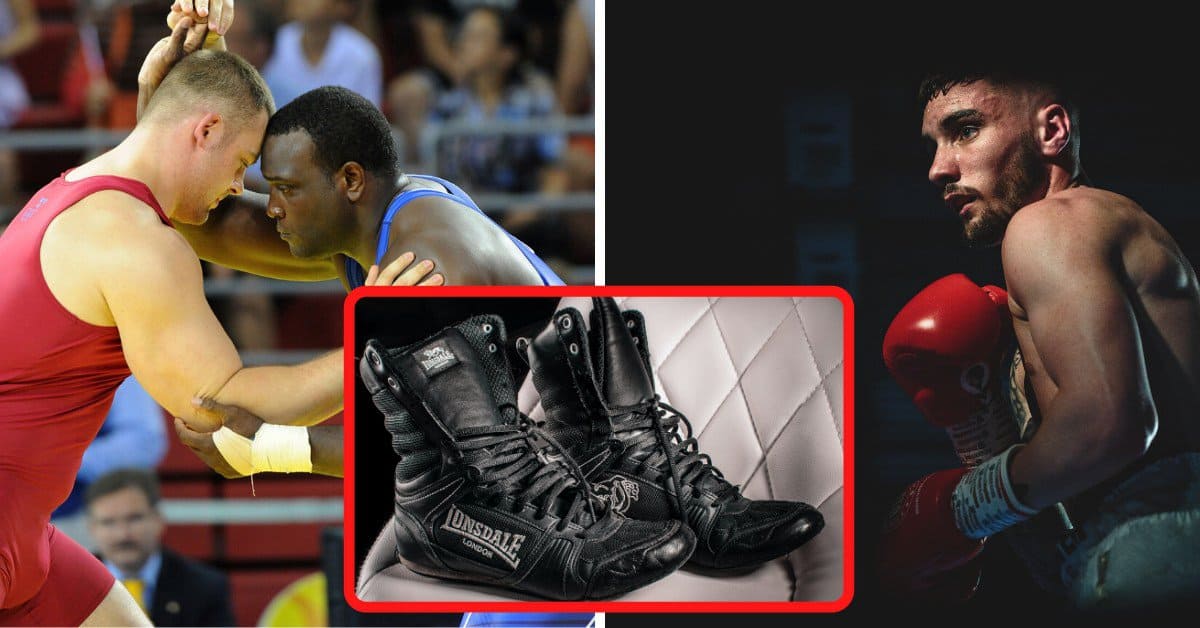 Boxing shoes and wrestling shoes are visually very similar. They’re both specially designed shoes for specific combat sports and although boxing and wrestling are very different in their execution, the footwear is similar due to the fact that the footwork and the pressure the fighters put on their ankles are similar. This is why we are going to compare these two types of shoes for you so you can see the benefits and advantages of one over the other.

There are, of course, other differences and we are going to analyze them in this text.

What Are Boxing and Wrestling Shoes?

Simply put, wrestling shoes are specially designed shoes used in wrestling, both in practice and in actual fights. They are designed to imitate a bare foot, meaning that they are very light, provide more traction and more ankle support. Such a design is chosen to protect both the wearer – because their ankles are better protected – and the opponent – because it decreases the risk of injuries potentially caused by nails. Because of that, wrestling shoes have a hight top design and cushioning on the inner side.

The same goes for boxing shoes. They are specially designed footwear. They have a soft sole, which is usually made of rubber or some other elastic material.

The design of the lower part is not overly different from standard sports footwear, but the thing that distinguishes boxing shoes from other types of sports footwear is the upper part, which is higher and covers the whole ankle.

The upper part can be padded or just reinforced, but its main purpose is to add firmness to the ankle area because of the quick footwork that is present in boxing, but at the same not to slow done a fighter’s movements.

The main difference between boxing shoes and the similar wrestling shoes is that the upper part of the former is usually somewhat higher than that of the latter. There are, of course, other differences and we are going to analyse them in this text.

We are now going to analyse the main points of these two types of footwear and their differences to see how they compare in each of these fields.

We all know how important movement in boxing is and even if you have great footwork in the arena, the traction your feet produce on the mat might slow you down just enough to give your opponent the advantage.

Boxing shoes provide the right amount of traction to allow you to successfully move your feet and not to lose speed whilst doing it.

The situation is not overly different when flexibility and traction of wrestling shoes are concerned. Due to a lot of movements in wrestling, the shoes need to be very flexible and provide enough traction on the map to enable you to move naturally in the arena. The shoes need to be designed in a way as to imitate a bare foot, meaning that they have to feel as if they weren’t even there.

This is a big difference between these types of shoes, because boxing shoes still feel like shoes, while wrestling shoes shouldn’t.

So, when comparing flexibility, we can conclude that wrestling shoes need to be more flexible than boxing shoes because of the nature of the sport itself, that demands such a specific design.

The same goes for wrestling, which also has a lot of foot movements. Due to these movements, you put a lot of pressure on your ankles, which is why you need good ankle support. Yes, wrestling shoes are equipped with ankle support, but you need to find a good pair that provides enough support for one of the most used parts of your body in wrestling.

Due to the nature of boxing – which is a standing sport where the ankles are at risk – boxing shoes tend to provide more support for the ankles to increase the fighter’s stability and to reduce potential injuries. This is done by making the support higher than in regular wrestling shoes, which is another essential difference between boxing and wrestling shoes.

Which type of sole you’ll chose depends on your preferences – single-sole models provide better grip, while split models provide more flexibility, meaning it’s all down to what you want. The important thing is that the soles provide enough fraction to allow you to move normally on the fighting mat. This is why you should always look for a pair that feels sticky and stiff.

The main difference when soles are concerned is what kind of movements they are designed for. Namely, boxing shoes have soles that are designed for forward and backward movements and not for moving sideways or for all-around movement.

On the other hand, wrestling shoes are designed for all-around movement, because wrestlers don’t depend that much on just going forward and backward. So, there is no real winner here – it’s just a matter of preference and/or choice.

The longevity of a shoes is always important. Although you won’t wear one pair your whole life, you’ll want to buy that you won’t need to replace in a couple of months. Durability is a relative thing when it comes to boxing and wrestling shoes, so you’ll have to either browse the web for certain information on a shoe’s durability, or ask around the store for precise information.

Still, because of a specific design and the movements used in the sport, boxing shoes tend to be a bit more durable than regular wrestling shoes.

Boxing shoes are lighter in weight than most other forms of spots footwear, wrestling shoes included. Such a design enables you to move better and does not cause any pressure on the feet, which cannot be said about other shoes. Knowing how quickness of movement is important for boxing, it’s pretty clear why this is a benefit of boxing shoes in comparison to other types of footwear.

Where to Buy Boxing and Wrestling Shoes?

Another thing which is not directly connected with the sporting aspect of these shoes is their availability. While wrestling shoes are usually available in stores and can thus be used as a temporary surrogate for real boxing shoes, boxing shoes have to be ordered separately or bought in specialised boxing equipment stores. Knowing that the prices are pretty much the same, keep in mind that you won’t find your boxing shoes just everywhere – so, pick your store carefully.

Can You Use Boxing Shoes for Wrestling? And Vice Versa

Now that we have shown you the main differences, let us see whether these differences really matter. Namely, it is a fact that boxing shoed and wrestling shoes are very similar, with the differences being more cosmetic than essential, really. In light of that knowledge, one must – at one point at least – ask themselves whether these two types are really that different, i.e. can they be used interchangeably?

Taking a liberal stance without analysing the whole situation completely is potentially “fatal” in this situation, since a lot of your achievements in these two sports might depend on the choice of your equipment. So, by being reckless and not weighing in on the differences, you might make a wrong decision that could threaten your future career.

If all you want to achieve is to stand in front of a punching bag and lose some weight, then doing it in trainers or your bare feet would be just fine. Even using wrestling shoes in boxing and vice versa would be completely fine in this case. If you wanted to get more serious and do some sparring sessions, you could still do fine with a pair of wrestling shoes as a surrogate.

But if you’re aiming to become a professional and want to give it everything that you’ve got, then it’s probably for the best to invest in a great pair of boxing shoes and do things properly.

Yes, we’ve all probably played a sport using the wrong type of footwear at leas once in our lives, but that doesn’t mean we can exploit that error indefinitely.

Well, there certainly have been, are and will be exceptions. Some professional fighters made their names by wearing wrong types of footwear, but that was their personal decision and they usually have (good) reasons for doing things that way.

Exceptions have to be made even in professional sport, but the fact that these rare cases are considered to be exceptions shows that is important to adhere to the rules.

In conclusion, all we can really say is that unless you are extremely picky, both boxing and wrestling shoes will probably perform perfectly well in a training environment, even if you use them interchangeably. In such cases, the difference between them is really not that big that you’ll notice it during training.

On the other hand, if you’re going pro – it is essential to have the right footwear and it is there and then that these small, but significant differences really start to matter. So, until the pro level, you can use them interchangeably or not use them at all, but on the highest level, where it really matters what you do and how you do it, you will have to perform using the right type of footwear.

If you have any specific questions about boxing and wrestling shoes, take a look at some of guide we wrote:

That’s it for today. Stay tuned for more and see you next time!