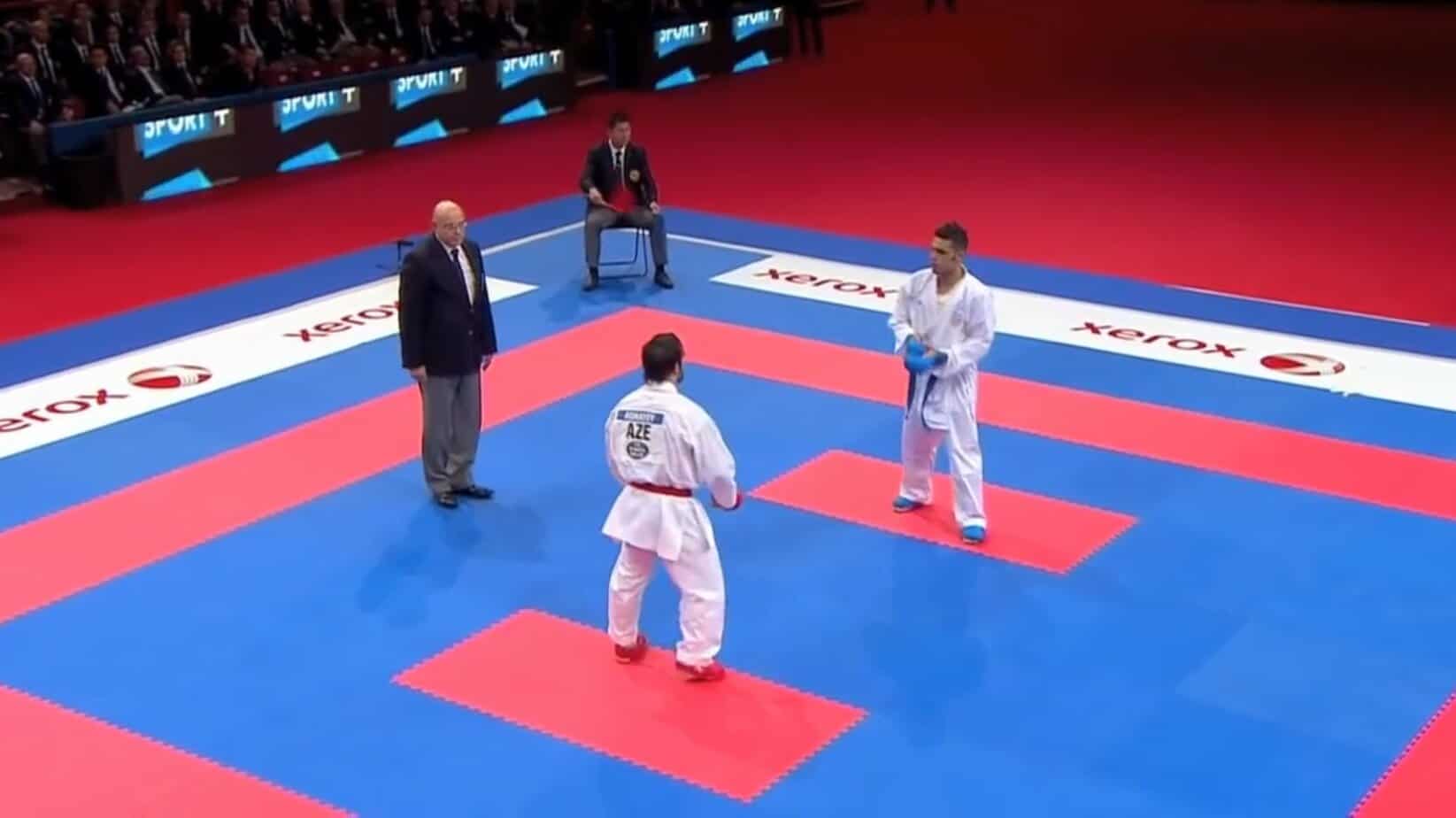 Continuing our series of articles on the subject of karate, today we are going to talk about the equipment needed to actively participate in the sport. As we know, each sport requires some sort of equipment. Whether it’s something basic like sneakers and specially designed clothes, or something more demanding such as a full set of martial arts equipment, each sport has something.

Karate is, of course, no exception and we shall present you an overview of what is needed to successfully participate in karate training sessions. Before we continue, though, we’d like to stress out that, unlike judo, karate has a very similar equipment set like Taekwondo, so you can also check our article on that topic as a point of reference.

The most basic piece of equipment for a karate student is the uniform, or gi. It is usually a two-piece white uniform with the belt tied around the waist. Unlike the similar Taekwondo uniform, whose top is usually a pull-over and is only held in place by the belt, the karate uniform is an open jacket, where the belt is used to tie jacket and close it.

The trainee uniform is usually either white (most common) or blue (less common). Unlike similar Taekwondo uniforms, they are completely in one colour, collars included. Instructors can also wear both white and blue uniforms and are distinguished by their belts. Karate also has other coloured variations – such as black and red – but they are generally very rate and usually have a symbolic or ceremonial meaning.

They are usually lightweight and tend to maximize the movements of a karateka.

This is the most basic piece of equipment necessary for karate practitioners. Someone who has no competitive ambitions and doesn’t aspire to be a professional fighter doesn’t need any other piece of equipment.

For more on belts in Karate, be sure to check out our article.

The chest armour is an essential part of competitive karate. They are made of special, lightweight material that simultaneously allows for both agility and speed, but also the protection of the vital part of the fighter’s body – the chest and rib areas.

Unlike Taekwondo, where WT and ITF have differing standards, chest armours are an essential part for all karate competitions. They do come in different sizes and shapes – the design varies more between different models than in, for example, Taekwondo, where the models are more or less alike – but also tend to use the same – white plus blue/red – colour scheme as in some other martial arts (p.e. Taekwondo, boxing, etc.). Some are designed to be carried like bags, while some have shoulder covering pads.

Where electronic point keeping is used, chest armours have special sensors that allow for point collection.

The helmets are usually red or blue in colour and always correspond the colour of the armour (see above).

Karate has special forms of hand gear, i.e. gloves, which are different than in other martial arts and combat sports. They’re not the same as the padded equipment used in Taekwondo, but are also quite different than regular boxing or MMA gloves. Boxing loves are usually larges, while regular MMA gloves resemble the padded Taekwondo gear more than regular karate gloves. Karate gloves are smaller than boxing gloves, but are similar in design, yet are closer in size to MMA gloves, although the best way to describe them would be to say they’re a cross between boxing and MMA gloves.

Other Competitive Gear for Karate

While karate does not have as much protective gear as Taekwondo does, they still have some additional pieces that are essential for a normal competitive career. The most important part is the footgear, which is actually a two-piece protective equipment that functions together as a unit. One part is located on the feet – the smaller feet guards, that also have special sensors where points are taken electronically – and the other covers the shins – they’re larger in size and are used exclusively for protection. They’re made out of a soft material that reduces the force of the opponent’s attack and also keeps the bones from breaking.

Although not necessary, competitors are encouraged to wear special protective gums for their teeth. This is especially important in sparring competitions, where head contact is allowed and gives a higher amount of points.

The question of footwear in karate is relatively interesting. Namely, although there are special shoes for karate (and other dojo-based martial arts), most schools either prohibit or discourage their use. They are prohibited in official competitions as well as in ceremonial promotions, because they give the wearer an unfair advantage and/or go against the guidelines. They are also prohibited during breaking demonstrations.

As far as training sessions go, using footwear is generally discouraged, but it is rarely forbidden. Trainees are encouraged to train barefooted or, during colder periods, wearing socks, but wearing specialised indoor shoes can also be possibility for the trainees.

On a final note, we can conclude that amateur karate students only need to have a uniform and a belt, although schools don’t always require them during training sessions, especially during warmer periods, when students can come in normal, plain clothes. As for competitive professionals, they have a very long list of necessary equipment, without which they cannot regularly compete.

And this covers our analysis of the equipment necessary for karate. Hope you enjoyed our text and see you next time!