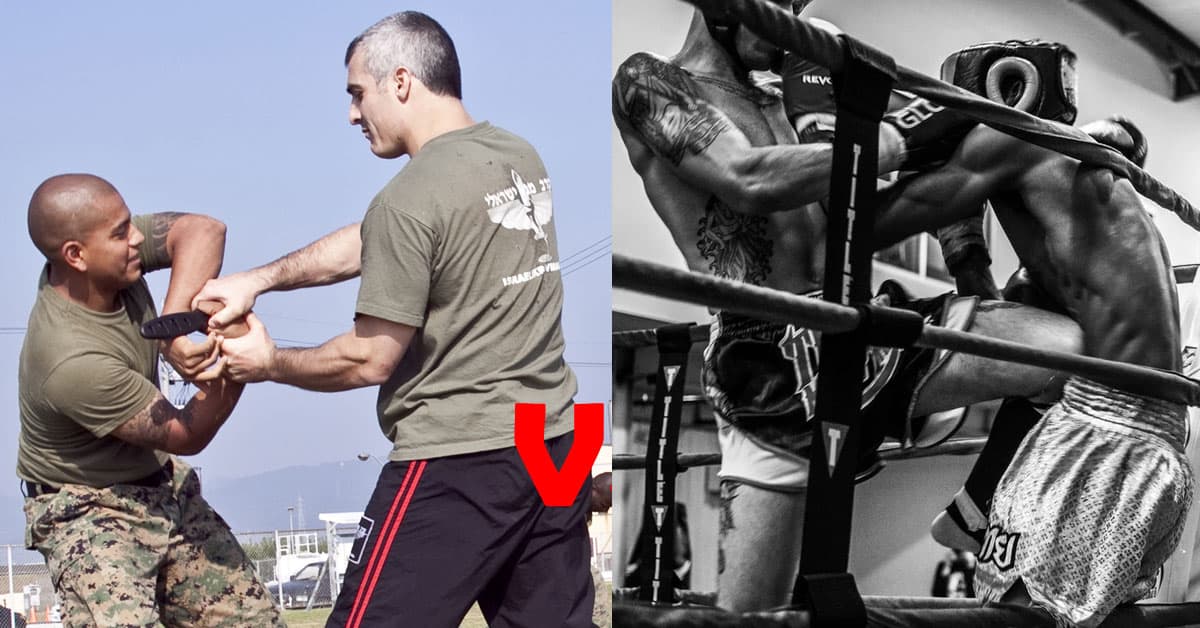 If you want to learn self-defense, there are hundreds of different systems, sports, and martial arts you can start training. The choice can be difficult if you don’t know what to expect from each. For instance, Krav Maga and Kickboxing can both be effective for self-defense but are diametrically different. So, what are the differences between Krav Maga and Kickboxing?

While Kickboxing is a combat sport more focused on making you a better athlete, fighting in a ring and under a strict ruleset, Krav Maga is a self-defense system with no competitions and no strict rules. You learn how to defend yourself by all means necessary.

So, when choosing between the two, it’s important to know what you want to accomplish. We’ll help you understand what all the differences are, which will ultimately help you choose the best possible option for yourself.

What are the differences between Krav Maga and kickboxing?

As we mentioned, the purpose of Krav Maga is different from most martial arts. Kickboxing, Karate, and many other arts have been turned into sports, which means they all have unified rules and combat restrictions. You learn how to fight within those rules, and your opponent has to adhere to them as well.

However, when it comes to Krav Maga, things are different. There is no combat sport where Krav Maga practitioners square off in regulated matches. Krav Maga is specially designed for defending yourself from all sorts of possible attacks out in the streets. There are no rules, prohibited moves, etc. You fight by using all means necessary.

Therefore, even though Krav Maga uses elements of Kickboxing, Karate, and other martial arts, it’s not a combat sport but a self-defense system. To understand all the differences, you should get to know more about both.

What is Krav Maga?

Krav Maga is a self-defense system developed in the 1930s by Imi Lichtenfeld, rooting in Czechoslovakia. The Jewish community was, as we know, constantly discriminated against and brutally attacked by Nazi forces. So, Lichtenfeld developed Krav Maga to help the member of his community to defend themselves.

He disregarded the rules of common martial arts and took elements from numerous combat sports, integrating the most efficient elements into one system. Those arts included boxing, kickboxing, Karate, and many others.

Street fighting and combat sports are very different, which he realized, and he wanted to take those elements to create an effective craft outside of the ring. Therefore, there are no rules or prohibitions in Krav Maga. You try to defeat your attacker by any means necessary, including groin shots, foot stomps, etc.

Today, Krav Maga is taught and used by the Israeli military forces and others, such as the US Special Forces. It teaches hand-to-hand combat and defending against attackers with weapons, such as knives, bats, or even guns. That’s why it can be utilized by military forces very efficiently.

However, the problem with Krav Maga is that there’s no competition and no unified body to regulate how the technique is conducted. Therefore, many gyms and trainers claim they will teach you Krav Maga, but they will make up their own techniques and moves that look flashy and cool but aren’t effective when put into practice.

That’s why it sometimes has a bad reputation, being labeled as ineffective, cocky, and overall bad. However, original Krav Maga and its original techniques are not only effective in a street fight but specially designed to give you an edge against any attack.

You’ll never be able to use it in a ring or an MMA cage, as it would be possible with Kickboxing, but it can literally save your life in case of an emergency.

Unlike Krav Maga, Kickboxing is a unified, rule-regulated combat sport. The training can be useful for self-defense, but it is not designed to prepare you for a street fight. Your training will be focused on getting the best results in a ring, where you and your opponent will face off under a strict ruleset, using only allowed striking techniques.

There are numerous versions and types of Kickboxing, but the main three that you can see in a ring are American, Japanese, and Dutch Kickboxing. Of course, Muay Thai might be the most popular version of Kickboxing, but it has a much different ruleset with many more techniques allowed, which basically make it a whole different sport. For that reason, we won’t be reflecting on Muay Thai, but only the other three types.

Rules and techniques among the three vary slightly, but the principles are the same. You use only striking to defeat your opponent, including both punches and kicks. Elbows are prohibited as well, while knees are allowed in specific situations. All kinds of grappling, takedowns, or ground combat are strictly prohibited as well.

With all that being said, you can see why it’s not perfect to use only kickboxing as a resort of self-defense in a street fight. If you get tossed on the ground or held in a chokehold, Kickboxing techniques can’t really help you there.

It is still a deadly martial art that is popular worldwide and will teach you possibly the best and most effective striking techniques possible but can only get you so far in a street fight, especially if you are attacked with a weapon.

Which is better for self-defense: Krav Maga and Kickboxing?

If you read the article so far, the answer should be pretty clear to you. Krav Maga is definitely better for self-defense because it is a system literally developed to serve that purpose.

It takes all the most effective techniques from various striking and grappling martial arts, modifies them, and blends them to create a no-rules hybrid craft that will get you out of almost any situation. You will use all means necessary, even if it means “dirty” moves, such as eye pokes, throat punches, etc.

However, we are talking about real, original Krav Maga used by military forces. Due to the lack of regulation, many so-called Krav Maga tutors are making up techniques that are often not just ineffective but silly – claiming that it’s Krav Maga.

If you find the right place to practice, with real tutors teaching the original system, there is probably no better craft in the world for self-defense.

We are not saying that Kickboxing is not a good craft to have in your arsenal in case of an attack. On the contrary, the style of fighting in Kickboxing is very aggressive. Every strike is delivered with a lot of power and precision, which will put you at an advantage in almost every hand-to-hand situation.

We’re simply saying that Krav Maga is, when it comes to pure self-defense out on the streets, more well rounded and complete because it works on your striking, escaping holds, incapacitating and disarming an assailant, etc.

Which one should you choose: Krav Maga and Kickboxing?

The choice between Krav Maga and Kickboxing heavily depends on what you wish to accomplish. So, to simplify your choice, we’ll divide it into several segments.

Firstly, if you wish to get stronger and better shape physically, Kickboxing will provide that for you much better than Krav Maga. Due to Kickboxing being a combat sport, you will have to be a great athlete first if you wish to compete at any level, let alone if you have high ambitions.

The training often consists of non-fighting drills, including cardio, weight training, agility and precision drill, etc. You have to be fit and strong because if you’re not, you’ll get crushed by your competition.

On the other hand, Krav Maga doesn’t require pristine physical fitness, although training usually leads to a better overall shape, too. It teaches how to defend from attacks, usually only a few seconds of action, not a three or five minute round like in Kickboxing.

Secondly, if your motivation is competing, you should also opt for Kickboxing because there is no competition in Krav Maga – no matches or sparring between two Krav Maga practitioners, only drills and teaching proper techniques of defense against different attacks. That’s why many don’t even consider Krav Maga to be a martial art, but simply a self-defense system.

Finally, if you only wish to learn how to defend yourself, Krav Maga might be the better choice compared to Kickboxing and other martial arts. It is designed specifically for that, so there’s no argument against its effectiveness. Of course, if taught and utilized correctly.

You should disregard the bad reputation it has as being fake and ineffective – while some new-age, flashy, ineffective techniques are being made up and presented as Krav Maga, that’s only the result of a lack of regulating body to determine which techniques should be used, and which shouldn’t even be considered Krav Maga.

So, to conclude, if you want to partake in a combat sport, get in great athletic shape, and learn prolific striking, go for Kickboxing. But, if your motivation is self-defense, and only self-defense, disregarding rules and boundaries, then there is no better choice you can make than Krav Maga.