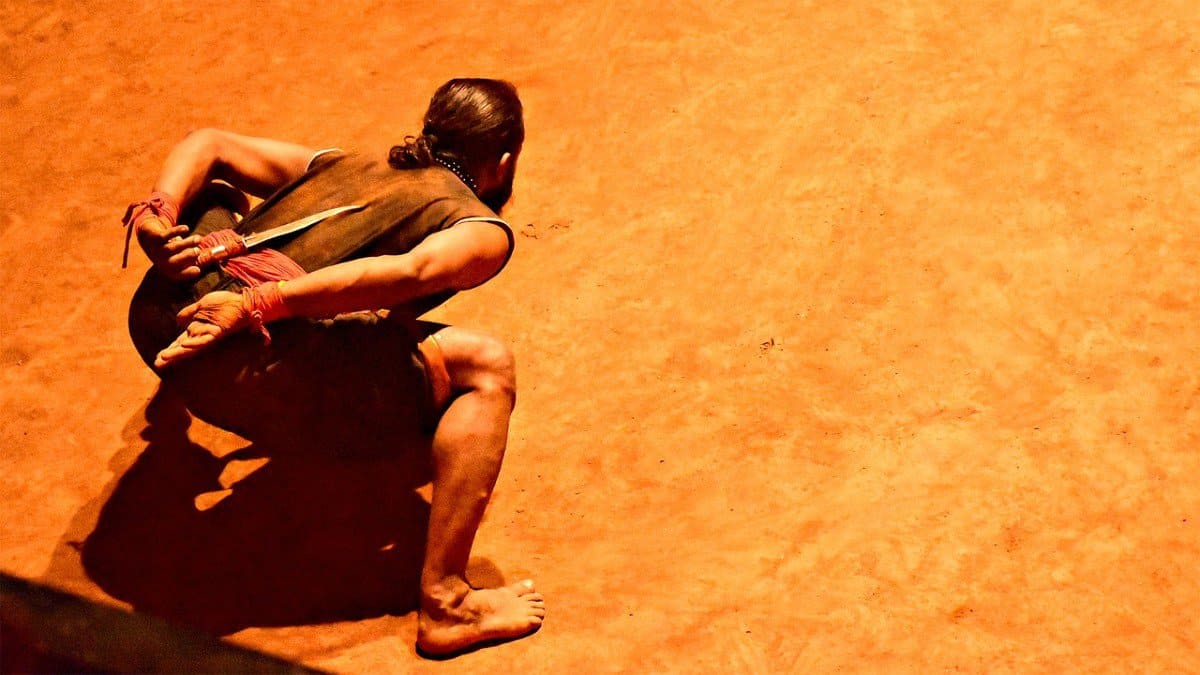 A knife fight is a deadly fight that might leave either of the fighters dead or seriously injured. It is also used as a form of a defense mechanism by some people in life-threatening situations.

But, there are also some martial arts that teach the use of knives, so let me tell you which they are, and everything else you need to know about them.

In the rest of the article, I will walk you through what knives are used for knife fighting, how steep is the learning curve, and everything else you might ask yourself about knife fighting martial arts.

What Is the Art of Knife Fighting Called?

The art of knife fighting is known as blade combat or knife combat.

Most knife fighting arts are learned by constant practice, using sparring encounters between two or more opponents to hone a practitioner’s physical skills and mental concentration.

Knife fighting also involves different types of grips, including hammer grip, Filipino knife grip, ice pick grip, saber grip e.t.c. Of all these grips, hammer grip and ice grip are very important, and it has to be effectively learned for a fighter to excel in knife combat.

Hammer grip is often used in both long and mid-range combat, involving thrusting and slashing movements.

On the other hand, the ice pick grip is used in tight areas whereby the fighters have limited space to fight. Angular stabbing movements and tight slashing can be used in this form of knife combat.

Knife combat also involves different engagement ranges such as long-range, mid-range, and close quarter (CQC) knife combat which is usually determined by the place and condition.

What Is the Best Knife for Martial Art?

Before choosing the best knife for martial art, you need to consider a few things like:

Avoid standard folding knives as the knife blade might fold when you need to use it. Also, avoid knives with spring blades as the internal spring may have a problem when you need it most. The structural make-up of a spring blade is also quite poor and might not work during a knife fight.

Fighting knives come in different types, and you need to familiarize yourself with them before you begin your knife fighting journey.

Some of the best knives for martial arts are:

It comes with an ergonomic design and safety lock, thumb knobs, and assisted opening.

The knife is made from high-quality materials that help it withstand rugged usage and remain durable for years.

Moon Boat Butterfly Training Knife is very thick but designed to reduce weight. It is light and will not slip easily.

A long-lasting tail latch comes oh the knife to help you keep it open or securely locked when closed.

It is designed to fit the hands of many users, and it’s great for outdoor activities too.

Perfect Point Knife comes in a different collection of throwing knives and throwing stars of different sizes and shapes.

Master Cutlery makes the product and is one of the largest knife manufacturers in the U.S. It features steel blades and a black or silver handle.

It provides the user with a balanced throw each time, and the laser cut out in each handle allows the user to tie a ribbon at the end.

There are many other types of knives used for knife combat, and I have tried a lot of them, but I find these three to be the best for martial arts training.

How Hard Is to Learn Knife Fighting in Martial Arts?

Just like in every potentially deadly art form, knife fighting isn’t something you’d learn over a few YouTube videos and Bruce Lee movies.

It’s a very dangerous proposition, and you need to be sure that’s a path you’d wish to take before you get to the real business.

To master knife fighting you need to first of all work on your physical conditioning, hand to eye coordination, and most importantly your reflexes.

Following this, you will enroll at a proper dojo that has a registered knife fighting martial arts instructor.

Once you’ve trained for a while, come out victorious in a couple of sparring matches, and gained the trust of your sensei; it’s only then that you’ll be certified ready for a real knife fight.

Are the Movie Depictions of Knife Fights Real?

Yes, and No. In a few cases they are, but you’ll have to get some proper Asian movies as those are the purists and real masters of the majority of knife fighting martial arts fighting techniques.

In most cases, however, the movie’s depictions of knife fighting are made belief and filled with extra effects to capture the viewers’ imagination as well as attention.

If you want to see the pros at it, you should visit a dojo, take permission from the sensei and feast your eyes on real poetry in motion.

Many martial arts use knives, but the six significant ones are:

Also known as Kali, Eskrima, or Arnis, Filipino martial art is a fight that involves the use of a knife and other weapons like sticks.

In Filipino martial arts, the focus of the fighter is to disarm or trap the opponent by using the hand without a weapon.

The art is traced to the Philippine-American war where the Moros (soldiers with weapons) decapitated and slashed many American soldiers.

Filipinos also used the Kali Eskrima to fight the Japanese in WWII.

This martial art uses knives, as well as other weapons, including the hands as fighting instruments.

The program also involves a combination of martial arts like boxing, Jiu-Jitsu, Muay Thai, wrestling, and others.

This is an Italian fighting system, also known as Schema Di Siciliano. The stiletto blade is used in this knife fight.

This knife combat style is often associated with assassins, and it is more of a secretive fighting system.

Silat is a general term for Southeast Asia’s martial arts that are indigenous to the Malay Archipelago.

It is one of the most effective and famous fighting systems, especially after the production of the movie ‘The Raid 2’.

It involves the use of different fighting styles and requires specific postures. Silat is one of the deadliest martial arts in the world, and you can check others on our list.

It is a comprehensive fighting system that was developed in the 10th century to address realistic threats on battlefields in Russian Special Forces.

This combat system involves using a knife and the ability to hit their target three consecutive times from a six-foot distance.

The Japanese Samurai warriors are well-known for their tanto blades or short daggers and katana blades, but they weren’t very effective on the battlefield.

This led to the creation of the Tantojutsu fighting system. The system involves a mix of knife strikes and footwork, and the ability to throw accurately.

As you can see, there are a lot of martial arts that use knives, and I have told you about the most famous ones.

Even though they can be dangerous, they also train you how to defend yourself with a knife, as well as against knife attacks.

It is now all on you, are you ready to learn martial arts that use knives, and to choose the one that suits you best, or the one that you have somewhere near your place.