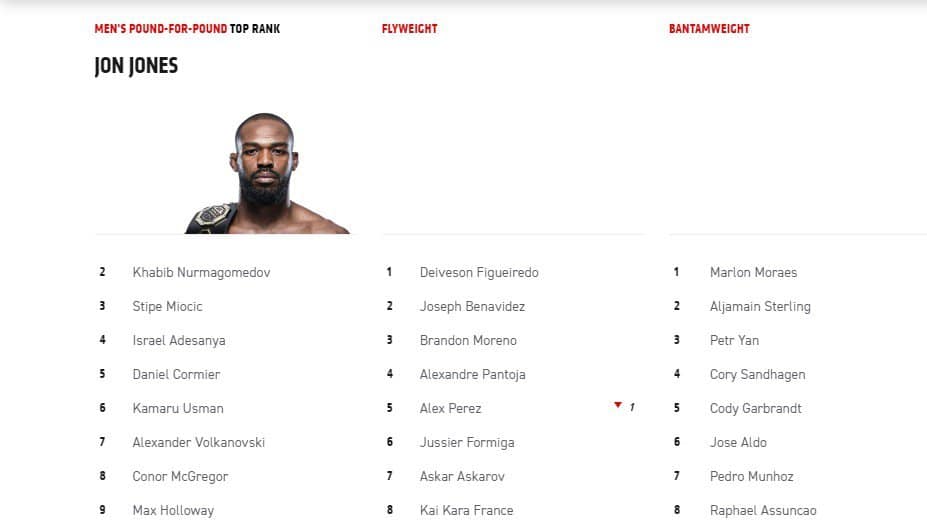 The UFC ranking system, which was introduced in February of 2013, is a very popular ranking system that’s most often considered to be the best standard for fighters nowadays.

However, there’s still a lot of scrutiny about the UFC rankings, and some people have their own suspicions of just how objective it is and how much people should actually rely on it.

So, how do UFC rankings work?

There are, however, a few things that need to be discussed when talking about UFC rankings.

How do the UFC rankings work in detail? Who are the media outlets that rank UFC fighters, and most importantly, just how eligible are they?

Those are the questions I’ll be answering in today’s article.

Contents hide
How Does UFC Ranking Work?
How Are UFC’s Pound for Pound Rankings Determined?
Media Outlets that Rank UFC Fighters
My Verdict

How Does UFC Ranking Work?

Firstly, let’s clear everything up by posting a direct quote from UFC:

Rankings were generated by a voting panel made up of media members. The media members were asked to vote for who they feel are the top fighters in the UFC by weight-class and pound-for-pound. A fighter is only eligible to be voted on if they are in active status in the UFC.

A fighter can appear in more than one weight division at a time. The champion and interim champion are considered to be in the top positions of their respective divisions and therefore are not eligible for voting by weight-class. However, the champions can be voted on for the pound-for-pound rankings.

This system seems to really be set in stone and work properly, right? Well, many fighters, fans, and journalists are not happy with the ranking system.

These systems are known for being notoriously biased – and that’s quite obvious.

No fan of any sport can escape bias when talking about their favorite fighter, club, team, etc. – and that’s the problem with statistics.

If you want the ratings to be correct, you need to base them on cold and hard statistical data (like wins and losses against fighters ranked similiar).

Currently, the UFC ranking system is taking very private, biased, and subjective opinions of journalists and taking them as statistical facts – that’s not the way this sort of rating process should be conducted.

It’s often that challengers are determined by fighters who make the most money for the organization or the ones that have the most impressive win streaks.

This basically means that the better and more popular fighters can choose smaller fights with worse fighters on purpose, just to keep their statistics up.

To sum it all up – UFC rankings are a very helpful tool to find your way around UFC’s current fighters and to find out who’s who in the sport – but they’re definitely not completely objective.

Obviously, fighters like Stipe Miocic who really are at the top of their game and have beaten everyone to get there deserve to be there – but there are a lot of choices on those lists that perhaps shouldn’t be there (or that high).

How Are UFC’s Pound for Pound Rankings Determined?

The process for ranking the fighters in the pound-for-pound category is the same as in other weight classes – the same media is giving their votes and making the rankings.

This rating shows how good a fighter is relative to their weight.

It basically takes their weight out of the equation and shows how good of a fighter the athlete is based on statistics and fighting ability.

If you’re looking to find out who’s the best overall fighter in the world regardless of body weight, then you have to look at the pound-for-pound category.

Let’s take a look at the media outlets that actually determine the rank of UFC’s fighters. Once again, to quote UFC’s official standing:

“The rankings panel is comprised of media members from the following outlets:

To put more perspective into your reading – let’s take a closer look at some of these outlets.

Nick Kalikas is a household name for the latest betting odds in the world of MMA and has a lot of info about combat sports.

CFMU-FM is a radio station from Ontario, Canada. It’s a campus radio station that’s owned and operated by the McMaster Students Union at McMaster University.

Why do they have the recognition and credit to give professional, career-defining opinions about professional athletes’ performances is truly a mystery.

Fightnews.com, on the other hand, is a popular website that’s often visited by anyone who’s into the sport.

This site has much more credibility when it comes to ranking fighters (which doesn’t necessarily mean they’re not biased).

MMA Weekly is probably the most popular website about anything MMA, with constant updates about the UFC, Bellator, Invicta FC, One Championship, etc.

They always provide the newest updates, results, rankings, etc. – and definitely have a lot of credibility when it comes to ranking athletes.

The Wrestling Observer is a newsletter that’s pretty self-explanatory: they bring the newest updates from the world of wrestling and MMA.

It’s been around for a long time, all the way from 1982 – and it’s often considered to be the first ‘dirt sheet’ – that’s a wrestling publication that’s covering the discipline from a real-life perspective.

Kimura.se – this is Sweden’s leading MMA site, growing at an incredible pace and promoting interest in the sport.

These are just some of the media outlets from the list.

Even though a lot of media outlets from the list are definitely filled to the brim with professional journalists who really know what they’re talking about when they’re discussing MMA and UFC’s rankings.

However, the two things I simply can’t get over are the bias, and “money fights” to be made

That’s why UFC’s rankings will only remain a good leading line for anyone who’s looking into the sport, but definitely not an absolute standard.

Rankings should be based on statistics, like wins and losses against fighters ranked similarly, how dominant were the fighters in those wins (losses), how often do they fight, etc.

If you have more questions about the UFC, check out my beginner’s guide to the UFC where you will probably find the answer!