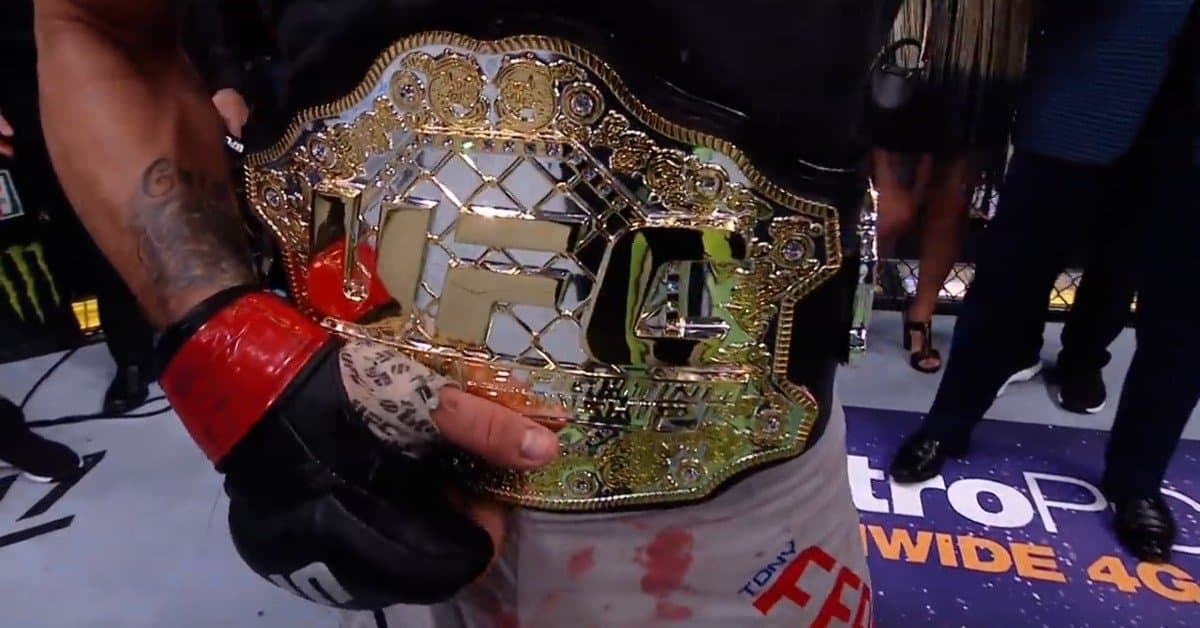 The UFC has a total of 12 weight classes, meaning there should be 12 active champions.

So, how come we’ve sometimes had 13 or 14 champs at the same time, meaning there were two champions in the same division.

Enter the UFC interim belt. We’ve seen it in boxing, too, but the UFC took it to the next level.

So, what is the UFC interim belt?

When an undisputed UFC champion cannot compete for an extended period for any reason (injury, illness, etc.), he/she doesn’t have to vacate the belt. Instead, two of the division’s top fighters fight for the UFC interim belt to serve as champion before the undisputed champ is back in action.

Then, the undisputed and the interim champion fight in a “unification bout,” after which the winner becomes the only division champion.

But, there are still questions about when a fighter needs to vacate, when can they hold the belt until their return to action, how does the UFC pick fighters to fight for the interim belt, etc.

After this article, you’ll have all the answers.

Contents hide
How Do the Belts Work in the UFC?
What Is UFC Interim Champion?

How Do the Belts Work in the UFC?

Before I get into the interim belts, you need to understand how the UFC division rankings work. That heavily determines who fights for the interim belt in the absence of the undisputed champion.

The new UFC Legacy belt poses more questions for interim champions because of the new design and system.

Let’s begin with the ranking system.

How Does the UFC Rank Fighters?

The UFC ranking system is one of the most criticized parts of the entire organization, as it leaves a lot of room for bias and subjectivity.

What is more, the UFC has started skipping rankings and giving title shots to fighters that aren’t ranked as the top challengers in their division but attract the most PPV buys. That makes the ranking system even more irrelevant.

So, how does it work? A panel of media members vote and rank the fighters by each division (and pound-for-pound) after each UFC event.

The problem is, though, the number of eligible voters declined from 78 in 2013 to under 20 today.

That means that every vote is worth more, and the rankings change even if only one voter changes his orders.

Because of that, we’ve seen ridiculous rankings and moves on the lists, such as inactive fighters rising on the list even though they haven’t fought for over a year, media members favoriting fighters from their native countries, etc.

Many voters opted out of the voting panel for various reasons. Some employers have forbidden their workers to participate because of their company policies.

But, what the fans see as the biggest problem is how the UFC uses the rankings.

Instead of using the rankings to determine challengers and have a transparent way for each fighter to get to the top, they simply use the ranking lists to hype up matches but tend to skip them to make the most profit.

For instance, Santiago Ponzinibbio had seven wins in a row and never fought for the title, while Brock Lesnar went 1-1 in his first two UFC matches and got the title shot in his third matchup.

That shows bias and proves that the rankings aren’t the driving force for matchups, as they should be. It’s money, and it’s not even close.

How Does a UFC Belt Work?

Before 2019, UFC had a belt system where, if a champion wins the title, he gets a new belt every time he defends it.

But, in 2019, they unveiled their new Legacy belt. It’s designed differently, with two plates on the sides, each having eight slots for small white precious stones.

So, instead of giving out a new belt after every title defense, one of the 16 stones is replaced with a red stone, representing the title defense.

That might sound completely irrelevant when it comes to the UFC champions, but it gets a bit more complicated when you add interim championships in the mix.

Let’s look at why this new belt is slightly problematic in that regard.

What Is UFC Interim Champion?

You probably heard of the term “undisputed” UFC champion.

As I mentioned, there are twelve, one for each weight division in the UFC.

The undisputed champion is the absolute king of the category. He’s the champ until he loses a fight or retires and gets a little red stone added to the belt after every title defense.

So, who or what is an interim champion then?

Let’s say that the undisputed champion has a complicated injury or a personal situation that will keep him out of the octagon for a year.

The entire division can’t stand still for a year, waiting for them to return to action. Instead, the UFC matches up two elite fighters from the division to fight for the interim title.

Ideally, it’s the no.1 and no.2 challenger, but usually, the UFC pairs up two guys that they find the most deserving for any reason.

Whoever wins becomes the interim champion (and gets the UFC interim belt) of the division, meaning they serve as the champion until the undisputed champ returns to combat.

Then, the undisputed and interim champion fight in a unification bout, and whoever wins becomes (or remains) undisputed.

That poses a few questions about the new belt, though.

Firstly, if the interim champ wins, does he get a red stone on his interim belt like he defended his title? Does he get a new belt as the new undisputed champ, or gets nothing?

That sounds like a technicality, but it’s a lot more than that. If they get the red stone like they defended the title, does that mean the undisputed champion was the challenger in their matchup?

That sounds a bit ridiculous, so let’s say they get a new belt. That means that the interim belt was utterly unnecessary and simply put around the fighter’s waist to create more hype, and again, earn more money.

Do they take those off after he becomes undisputed, or do they add another one if it counts as another title defense?

The truth is, if there were no interim belts, nothing would change neither for the undisputed champ on the sidelines or the challengers. It just complicates things unnecessarily.

The UFC should either make the real champion vacate and hunt his title again when he returns or wait for his return to action and have the other fighters compete for the no.1 challenger spot.