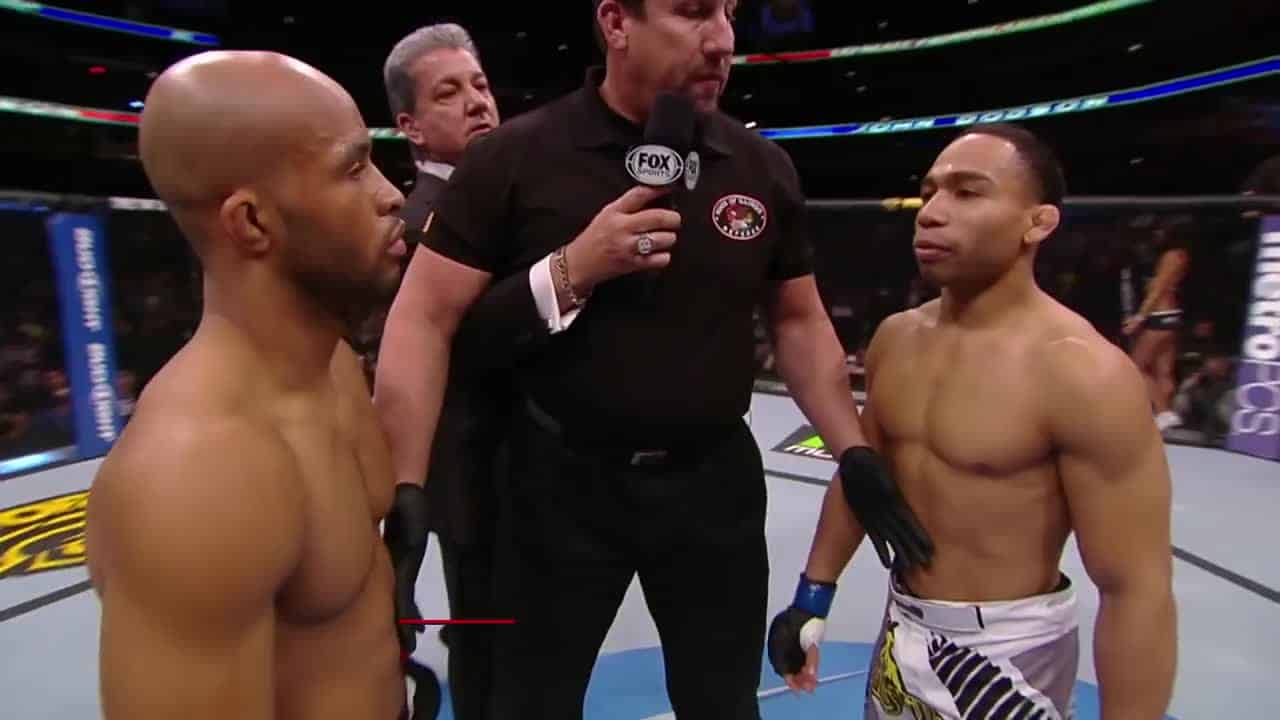 Did you know that most UFC champions have been below average height in their respective divisions?

It seems that it’s easier to utilize the advantages of being shorter in MMA than the other way around (not saying there weren’t any tall fighters who utilized their height, too).

That made me wonder, who are the shortest UFC fighters ever, and how successful were they in the octagon?

So, I piled up a list of the nine shortest UFC fighters ever (and one honorable mention at the end!) for everybody else interested in knowing if heart-over-height is a real thing.

He’s listed at 5’4’’, although he always felt (or looked) kind of big for a flyweight, so maybe his real height is just a bit taller.

Nevertheless, he’s the guy who dethroned Demetrious Johnson at flyweight after eleven consecutive title defenses and then became the bantamweight champion too after already being an Olympic gold medalist in wrestling.

Even though Ray Borg is listed at 5’4’’ (163 cm), he always looked small compared to the fighters he faced (except for Demetrious Johnson). Maybe it’s because he always looked drained from his weight cuts, as he missed weight a whopping four times in the UFC, ultimately leading to him being cut from the roster.

He was a great fighter in his best days. However, the biggest highlights linked with would both be undesirable. The first is the flying armbar that Johnson beat him with during their title match, and the second being the infamous Conor McGregor bus attack where pieces of glass cut Borg’s face.

I’m putting Bruno Gustavo da Silva on this list because I truly believe this guy can be dangerous in the UFC. He had quite a rocky start to his UFC career after getting a no-contest in his first fight (his opponent missed weight and tested positive for PEDs) and then losing two decisions in a row.

However, the UFC kept him on the roster, and he delivered two awesome knockout finishes in two months in 2021. Both those knockouts earned him Performance of the Night bonuses, and if he continues to put on a show like these last two fights, he’ll climb the ladder quickly at flyweight, even though he’s only 5’4’’.

Joseph Benavidez is one of the most well-known fighters in the lighter divisions due to his aggressive style and fearless game. Being 5’4’’ (163 cm), he was the shortest bantamweight fighter before the flyweight division was introduced in the UFC.

Joe became a flyweight legend even though he never won a title. It felt like he deserved it almost every time, but he came up short four times – two against Demetrious Johnson and two against Deiveson Figueiredo.

Apart from being one of the shortest UFC fighters ever at 5’3’’ (160 cm), Jarred Brooks also had one of the weirdest UFC careers I can think of. During his four-fight tenure, he went 2-2. Three of those fights ended with a split decision, and the fourth was a KO loss for Brooks; he knocked himself out with a slam.

Of course, the slam self-KO went viral, which is what Brooks is best known for, but when you look at him as a fighter from a more objective standpoint, he’s not bad at all.

He lost a split decision to Deiveson Figueiredo in Brazil and showed heart in every match. He’s not in the UFC anymore, but those two were his only career losses, and he’s now 16-2.

He might be only 5’3’’ (160 cm), but John Lineker was a bulky dude. In fact, he was so bulky he competed at bantamweight for half of his UFC career. He started at flyweight but missed weight four times.

Usually, you get cut for that, but the promotion saw something in Lineker, as he excitingly won most of those fights, so they only forced him to go bantamweight.

Unfortunately, he missed weight yet again, even at bantamweight, which ultimately lead to him parting ways with the UFC after his contract had expired, leaving for ONE Championship in Asia.

John Dodson is officially listed at 5’3’’ (160 cm), but he always looked like he was the smallest guy in the octagon, so I believe he could be a bit shorter than that. Nevertheless, he’s still one of the shortest UFC fighters ever and one of the most exciting low-weight-division fighters ever.

The Magician fought for the flyweight title two times, and he was one of the fastest fighters in UFC history. He used his quickness and agility to blitz fantastic combinations on opponents. Ultimately, he competed at bantamweight but could never get any real momentum after the second title fight, alternating between Ws and Ls constantly.

Despite being one of the shortest UFC fighters ever, Mighty Mouse was one of the most dominant forces the promotion has ever seen. Being 5’3’’ (160 cm) never stopped him on his way to greatness, as Demetrious Johnson demolished everybody in his path to a record-breaking 11 title defenses.

He was the first UFC flyweight champion and held on to that belt for six years before eventually losing. However, many folks don’t know that Johnson had fought for the bantamweight title and lost to Dominick Cruz. After that, the flyweight division had been formed, so he moved down.

Hector Sandoval is the only male UFC fighter in history (as far as I could find) listed below 160 cm. Therefore, at 5’2’’ (157 cm), he’s the shortest UFC fighter of all time. His UFC tenure lasted four fights, where he was 2-2, and only one fight went to the scorecards.

Sandoval first delivered a first-round knockout against Matt Schell in his last two fights but got knocked out himself a few months later against Dustin Ortiz in merely fifteen seconds, ultimately leading to his cut from the roster.

Chris Barnett isn’t one of the shortest fighters in UFC in general, as we all know that will be guys competing at the lowest weight categories. Barnett is on this list because he recently became the shortest heavyweight in UFC history at 5’9’’ (175 cm), beating the previous record-holder Mark Hunt, who was 5’10’’ (178 cm).

Just to give you the full picture, the heavyweight Barnett is the same height as Louis Smolka (5’9’’), a guy who competed in the flyweight division half of his career. It was a crazy stat line for me, so I had to share it with you.