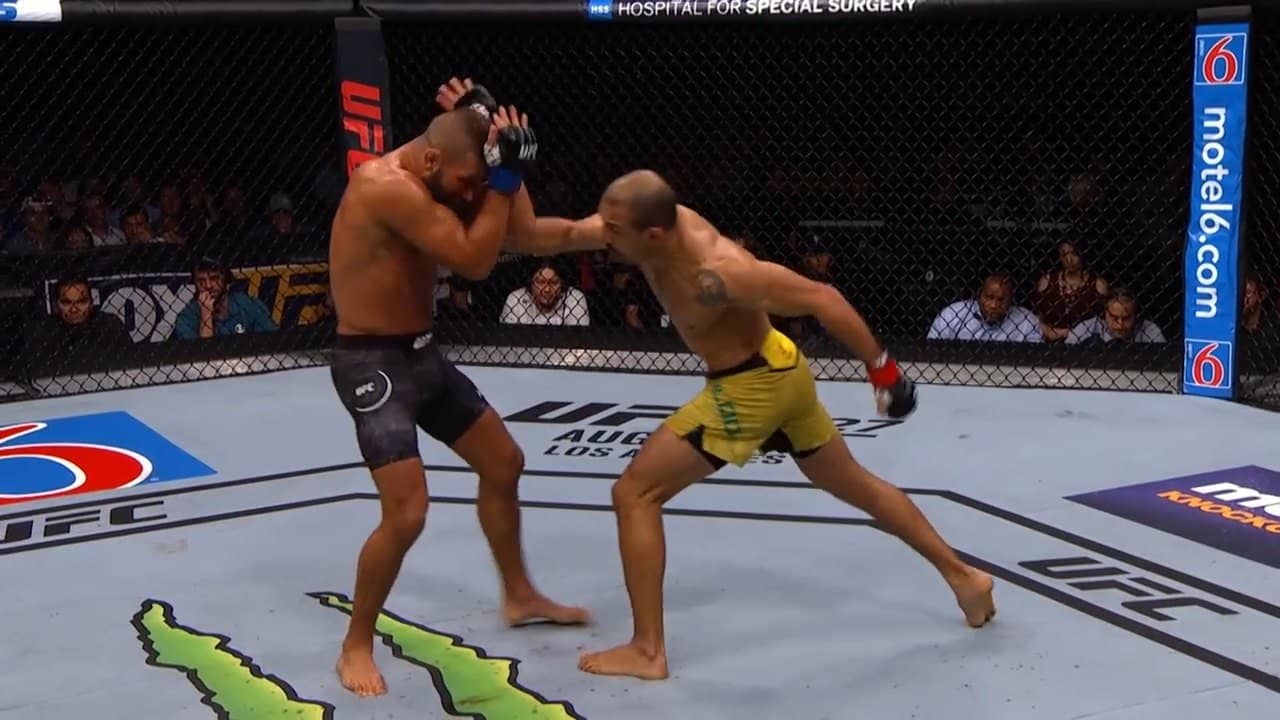 To be at the top of the game inside the UFC, fighters have to be skilled with striking, grappling and clinching techniques. Muay Thai is the perfect foundation for MMA striking and clinching. It ensures a diversity of hand, leg, knee, and elbow strikes, as well as perfect clinch game. So, let’s take a look at best Muay Thai fighters in the UFC and MMA history.

Worth noticing is that the given list is not in a particular order. We chose fighter based on their UFC and general career resume, their skills, and usage of techniques.

Jonathan Dwight Jones is an American professional MMA fighter who is fighting in the UFC. Jones is often regarded as one of the greatest MMA fighters, and he is the current and two-time undisputed UFC Light Heavyweight Champion.

Jones is a great Muay Thai striker and often finishes his opponents with those techniques. With his long limbs, Jones delivers pain either with his hands, knees or legs.

Donald Anthony Cerrone is an American MMA fighter and former professional kickboxer known by his nickname “Cowboy”. He is currently signed with the UFC and competes in their Lightweight division.

He probably isn’t the best fighter in UFC, but he is still a great Muay Thai fighter. He had some great fights in his career, and most of them came due to his good knowledge of Muay Thai techniques.

Valentina Anatolievna Shevchenko is a Kyrgyzstani-born Peruvian professional MMA fighter and former Muay Thai fighter. She competes in the women’s flyweight division of the UFC, where she is the current Women’s Flyweight champion.

Shevchenko is widely considered as one of the best female fighters in the world, and certainly the best women Muay Thai fighter in UFC.

Confidence & fear… all rolled into 1

Darren Till is an English MMA fighter and former Muay Thai kickboxer, currently competing in the Middleweight division of the UFC. Till also competed in the Welterweight division, and once challenged for the UFC Welterweight Championship.

Till has an amazing knowledge of Muay Thai, has fought in a huge number of fights, and probably has the best Muay Thai clinch in UFC.

Anderson da Silva is a Brazilian-American MMA fighter and a former UFC Middleweight Champion. He holds a record for the longest title reign in UFC history at 2,457 days. Dana White, Joe Rogan, and many other MMA analysts named Silva as best UFC and MMA fighters of all time.

He is an expert in Muay Thai, boxing and taekwondo, and primarily a stand-up fighter. He had amazing striking accuracy and power, and he was regarded as one of the best strikers in the history of MMA. He could change from southpaw to orthodox with almost no change in effectiveness.

Silva is maybe the best male Muay Thai fighter in UFC history and knocks out his opponents with almost all parts of his body. He started training Muay Thai when he was a teenager and has developed it to technically vicious ability.

„He who is not courageous enough to take risks will accomplish nothing in life.”☝? ~ Muhammad Ali ☝? I will always say that it is better to take the risk and fail than never even try to fight for your dreams.? We may not be made of steel, we may get cut and hurt, however, all scars and bruises turn out to be symbols of our courage, honor and brave heart.❤️⚔️?☝? Be strong. Be brave. Be fearless. Take the risk and be ready to pay the price.?? Be proud of what you accomplish.✊?✨? ?? #teamjoanna #UFC #wmma #mma #UFC248 #bebrave #bestrong #befearless #livingmybestlife #Polska #Poland #ATTNATION

Joanna Jędrzejczyk is a Polish MMA fighter and former Muay Thai kickboxer who competes in the women’s flyweight and women’s strawweight division of the UFC. She is a former UFC Women’s Strawweight Champion.

She started training Muay Thai when she was 16 years old, competed in it for 10 years, won over 60 matches, and all sorts of medals.

Edson Mendes Barboza Jr. is a Brazilian-American professional MMA fighter and former Muay Thai kickboxer who competes in the featherweight division of the UFC and has formerly competed at lightweight.

When he was 8 he started training Muay Thai. He has a professional Muay Thai record of 25-3 with 22 victories by knockout and 17 finishes in the first round.

He is an amazing stand-up fighter, that has a great leg and spinning kicks, and crazy flying knees.

He is best known for his Muay Thai striking and leg kicks, coupled with defensive wrestling. Aldo also has a dynamic all-around striking boxing technique. His punches are very fast and precise, and he is for a good reason here on our list of best Muay Thai fighters in UFC history.

Nothing can happen without God’s permission and God will not allow a difficulty unless He has a divine purpose for it. If you will keep your peace, you’ll pass the test, and God will bring you out better than you were before. #havefaith ?? #standupwithchrist ________ Nada pode acontecer sem a permissão de Deus e Deus não permitirá uma dificuldade, a menos que Ele tenha um propósito divino para isso. Se você mantiver a paz, passará no teste e Deus o fará sair melhor do que antes. #tenhafé #FirmesEmCristo

Cristiane Justino Venancio is a Brazilian mixed martial arts fighter. “Cyborg”, such is her nickname, was the featherweight champion of Strikeforce (beating Gina Carano) in 2009 and the Invicta Fighting Champion between 2013 and 2016 before starting to compete in the UFC, where she was champion of that category after winning over Tonya Evinger. She is currently under contract with Bellator MMA and is the current featherweight champion.

Cristiane played handball in Brazil before being discovered by Rudimar Fedrigo, a coach of the Chute Boxe Academy.

She is an amazing Muay Thai fighter, and she loves close-quarters fighting. Cyborg has many Muay Thai awards and has fought in its tournaments.

Max Holloway is an American MMA fighter competing in the Featherweight division of the UFC where he is a former UFC Featherweight Champion.

He is an amazing fighter and was one of the youngest ever UFC fighters to become world champion.

Holloway has amazing stand-up skills, that are the results of his Muay Thai training. He has a good range, and he is using it to his advantage.

Johnny Walker is an excellent Muay Thai fighter, something that he showed against his last three opponents in UFC, knocking them down spectacularly.

Even thou he is pretty new in UFC, he has already proved himself as one of the best Muay Thai fighters in history.

“Our greatest glory is not in never falling but in RISING every time we fall”- Confucius // @bellatormma @monsterenergy ?: @lucasnoonan

And in the end, we have a little surprise for you – yes, Gaston Bolanos!

Gaston Bolanos is a Peruvian MMA fighter currently competing in the featherweight division of the MMA promotion Bellator MMA.

He has an amazing and unique finishing move, his spinning elbow, that he uses to knock his opponents down, and he has great success with it.

Even thou he is maybe the weakest all-around MMA fighter on this list, he is for a reason named one of the best Muay Thai fighters in UFC history.

Who Is The Best Muay Thai Fighter in UFC (MMA) History?

It is really hard to tell. There are some amazing fighters on both the women’s and men’s side of the UFC. If we had to choose, it would probably be Anderson Silva and José Aldo (men), while on the women’s side it is maybe even harder to chose. We would probably go with Valentina Shevchenko and Joanna Jędrzejczyk.

All of these fighters are amazing at Muay Thai, so we had to include them all on our list of best Muay Thai fighters in UFC history. Tell us in the comments do you agree with our choice.