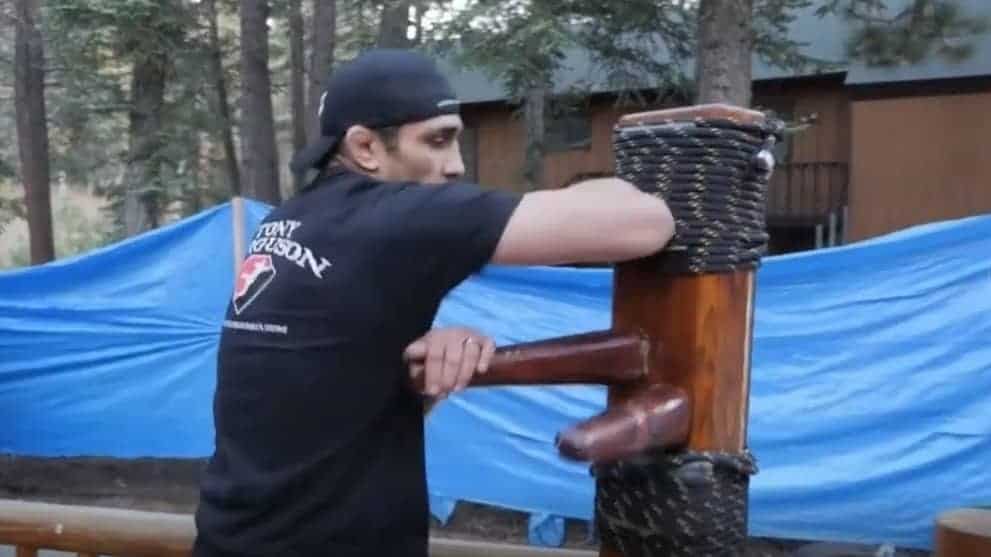 Today we are going to discuss what is popularly called a Wing Chun dummy.

The Wing Chun dummy is a wooden dummy used in Chinese martial arts as a practice dummy to train both offensive and defensive skills and is used in a number of kung fu styles originating in southern China.

In this article, we are going to bring you several essential points on the dummies themselves and help you to understand the concept behind it a little better.

Although the term “Wing Chum dummy” is by far the most popular, it is not the contraption’s actual name. The dummy is actually called mu ren zhuang (Chinese: 木人樁), which literally means “wooden man post”. So, the better and more precise term would be “wooden dummy”, instead of “Wing Chun dummy”. Why? Because its use is not limited to Wing Chun.

Namely, the term “Wing Chun dummy” defines that the wooden dummy is specifically designed for Wing Chung, just one of the several styles of modern kung fu. So, while the term is not technically incorrect, it is quite limiting and does not allow for a conclusion that the dummy is actually used in other kung fu styles.

For example, a modified version of the wooden dummy is used in Jeet Kune Do, a martial art similar and very connected to Wing Chun, but not completely identical. A fun fact – the first Jeet Kune Do dummy was designed by none other than the legendary Bruce Lee himself, who modified the original dummy’s neck and added a metal leg, instead of the usual wood.

Choy Lee Fut, another style of kung fu, utilises a larger number of modified wooden dummies, each of them specific to a specific style and adapted to the philosophy of the specific martial art.

What Is the Wing Chun Dummy Used for?

The wooden dummy is used for solo training and is a surrogate for a sparring partner. It cannot attack you, but it is designed in a way to motionlessly simulate a potential moving opponent. It is divided into several sections and is used to enhance one’s range, positioning, flow and precision of movement.

The specific design of a wooden dummy provides a challenge for the trainee and stimulates him to better the above-mentioned skills in order to successfully utilise the dummy.

Here are some practical videos on how training with a wooden dummy works:

There are two main benefits of using training with a wooden dummy. Firstly, it is probably one of the best and most practical solo training instruments in martial arts in general. Kung fu is a very specific martial art and it has several different styles, which is why it is not always easy to find a potential training partner.

Also, even if you do manage to find one, he might not be available when you need him, which is why a wooden dummy is ideal. It simulates a real partner and it is fully functional for exercising your skills the same way as with real person.

The second benefit is exactly that – it simulates what you need to master very vividly. Namely, the design of the dummy is not meant to simulate a real human body, that much is obvious, but rather obstacles or, as they are called in the philosophy of kung fu, energy pathways.

So, while practicing with a wooden dummy, you learn all the essential movements necessary for a real-life practical application, which is a great benefit of something that is essentially just a smartly designed piece of wood. Other martial arts do not have such training devices, which is also one of the benefits.

How Tall Should a Wing Chun Dummy Be?

As you can see on picture(s), the wooden dummy has a very specific design and although there are, as we have already said, several variations, in this article we shall present the most popular among the designs – the Wing Chun dummy.

For starters, we should say something about the origins of the design. The origin of the initial design of a Wing Chun dummy is a matter of oral tradition and it is associated with the notorious destruction of the Shaolin Temple during the reign of the Qing Dynasty, somewhere during either the 17th or the 18th century (historical and oral sources aren’t clear on the exact date and emperor that ordered the destruction).

After the destruction, five Shaolin monks, known as the Five Elders of Shaolin (Chinese: 少林五祖), managed to survive the government-lead purge. Among them was a nun called Ng Mui or Wu Mei (Chinese: 伍枚) and it is said that she is responsible for creating the modern design of a Wing Chung dummy.

Namely, it was her that took a total of 108 dummies in the temple and combined them into on specifically designed dummy in order to make trainings more efficient and effective. This is, of course, more of a myth than a historical fact, but it is nonetheless an interesting piece of trivia.

The design has, of course, changed throughout the years and the modern design of a Wing Chun dummy is attributed to famous martial artist Ip Man (or Yip Man), who adapted the design to fit living in an apartment in Hong Kong. The modern design has three arms and one leg that represent various potential positions of an opponent’s body.

The modern design has a certain level of springiness, i.e. it is relatively mobile, which is a good simulation of a potential live opponent. This is why it is colloquially referred to as a “live dummy”, compared to a traditional “dead dummy” which was completely immobile.

Modern Wing Chung dummies also have a variation that can be mounted on a wall, as opposed to the traditional ground-based dummies. This is a reflection of life style changes throughout centuries, as more people lived in small(er) apartments so the design had to be adapted to such conditions.

A big question related to the design of a Wing Chun dummy is its height, i.e. – how tall does a Wing Chung dummy have to be? Although, as a general rule, the legs of the dummy should be suspended around 15 cm from the floor, there is no general rule. Why? Because the dummy should correspond to your own height and body structure.

If you are looking to buy a Wing Chun dummy, then we have the right thing for you.

This wooden Wing Chun dummy is excelent for your home workout, or your gym.

It is made from genuine quality wood, with a durable metal base. Wooden Dummy arms extend 12.6″ from the dummy body. The dummy arms can be adjusted to almost leveled or staggered positions. The metal base is approximately 16″x 16″ with 12 large suction cups.

This wooden dummy is definitely worth purchasing, and you can find it here on Amazon.

How Do You Make a Wing Chun Dummy?

Seeing that the dummy is just a sophisticated piece of wood, one would naturally ask oneself – can I make my own dummy at home? The short answer is – yes. A more detailed answer is still – yes, but it takes a lot of time and effort.

The process of making a Wang Chung dummy is very sophisticated and it requires a lot of skill, precise tools and a lot of effort. Although relatively simple on the outside, it is a complex mechanism and it has to be made perfectly in order to fulfil its purpose.

As we’ve never made one ourselves and the process is fairly complex and long to describe, we’ll give you a video with the instructions so if you have the time, the tools and the willpower – you can try and make one yourself.

Here is the video:

That is everything you need to know about the Wing Chung or, more precisely, wooden dummy. We hope we’ve managed to answer your questions and stay tuned for more information on martial arts.