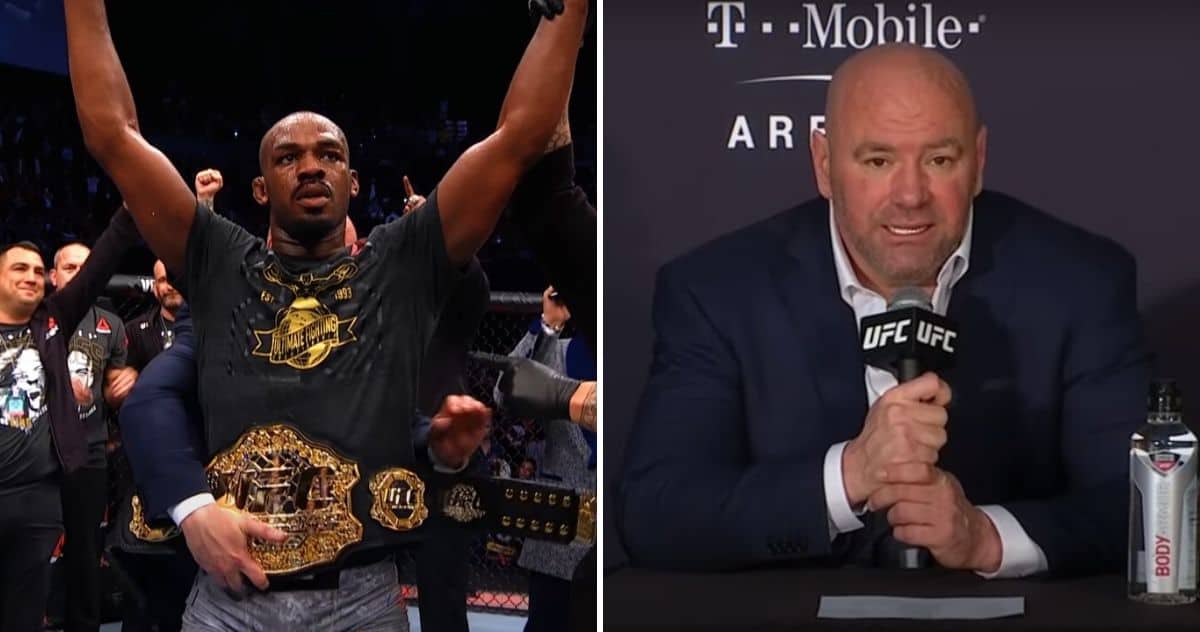 A public debate between Jon Jones and Dane White has led to making the current light heavyweight champion ready to leave the UFC!

Jones and White have been arguing over social networks and media ever since news broke a few days ago that their negotiations over ‘Bones’ transition to a heavyweight and potential fight with Francis Ngannou had failed.

The UFC president blamed Jones for the failed negotiations, saying he was asking for “absurdly too much money at the absolutely wrong time.” The UFC champion did not remain indebted to his boss, so shortly afterward he accused him of lying and that they never got into talks about increasing their income.

White then went a step further and decided to give an insight into Jones’ alleged demands while hanging out with the media.

“I’m quoting him and I’ll tell you what he told my lawyer. He told him he wanted the money Deontay Wilder was making. I think it’s $30 million, that’s how much Wilder made,” White said, referring to an amount similar to which the ‘Bronze Bomber’ associated at the time of his rematch with Tyson Fury.

“It’s fun to be in the hall in the morning and watch Jones’ tweets claiming I’m lying. We have his text messages. It’s not that I can’t prove what I’m saying is true. We have messages, but I won’t publish it in the media. But we can if he wants to sit down and do a lie detector and just see who’s telling the truth,” White continued, deciding to end in a conciliatory tone:

“I don’t want to argue with him. He’s made a lot of money already. Look what he’s achieved. I’m the one who says there’s no debate. He’s the best fighter of all time. No matter what you think of his last two fights, three people whose opinion matters said he won. He is undefeated and he fought with all the best. And with everything, he does outside the Octagon. Legal battles, drugs, alcohol, with all that he is still a world champion,” White concluded.

Jones, of course, couldn’t ignore everything the UFC president said so through a series of ‘tweets’ he replied to White again:

Don’t be a fucking liar, my reputation has already taking enough hits. I don’t need this bullshit Dana. I never asked for Diante Wilder‘s numbers. And how about since Diante is making 30 million, we settle for half of that. Since you said I’m the goat and everything.

I don’t even make half of half of what Diante Wilder makes. If my reputation causes you to undervalue me this much. Just go ahead and release me from my @Ufc contract altogether. I’m sure some promoter somewhere will be more than happy to pick me up.

And if I wanted to compare money to someone else, I would compare money to my brothers. I see firsthand the way the NFL treats their champion athletes, there’s a huge difference. I’ve kept my mouth shut my entire career.

Do I make 5+ per fight yes. Should I stick to that number for my super fights? No. If you don’t agree with me you just don’t know business. I certainly didn’t ask for 30, never even threw out a number.

Let’s also mention that Jones earned half a million dollars for the last fight, in which he defeated Dominic Reyes. But that is the amount that does not include various possible bonuses, as well as the share of PPV.