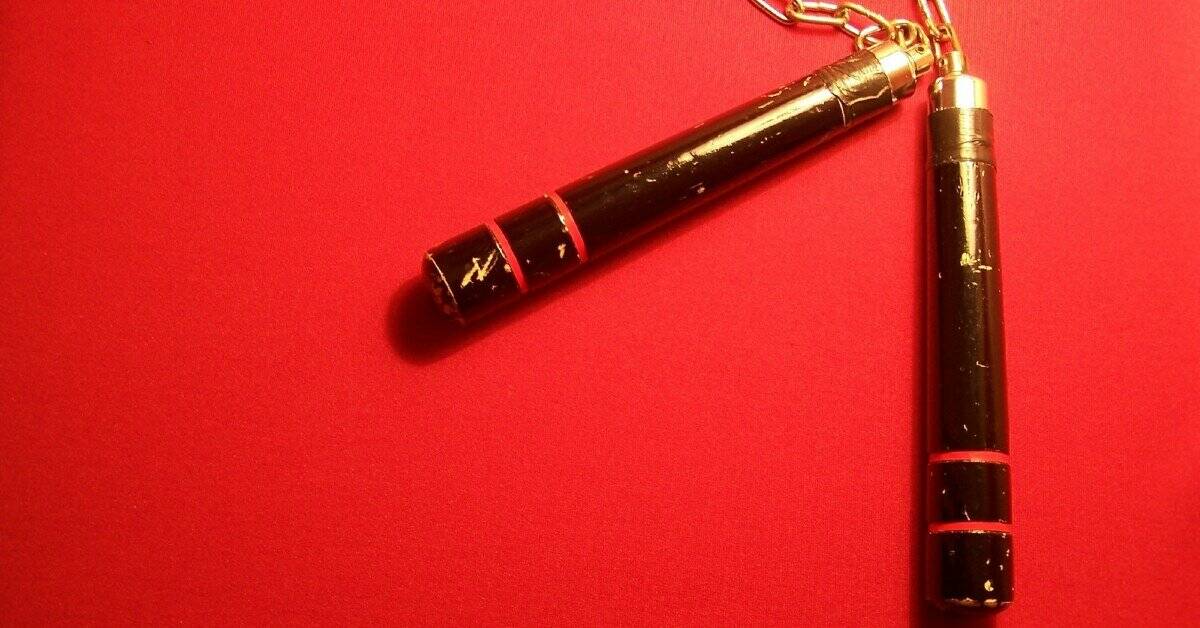 Karate is one of the most popular martial arts in the world, with millions of practitioners all over the world. The nature of this wonderful art is peaceful in its core, and the layered learning approach makes it great for people of any age to learn. It was developed in Okinawa, Japan for self-defense, and a lot of different approaches evolved – even the ones using weapons.

However, Karate translates to “empty hand”, which already makes it clear that it doesn’t use weapons. While it did develop as a sister martial art to Karate, Kobudo is considered a separate martial art that uses similar techniques, origins, and training approach, but implements all sorts of weapons in its arsenal.

The weapons used in Kobudo are traditional Okinawan weapons. It’s mostly things they could make on their own, or objects of different purpose used as weapons. But, before we get into all the weapons you can practice within this form of Karate, you should know how the sister martial art came to be and what is it all about.

A short history of Kobudo

While they are often used as synonyms, there is a difference between Kobudo as a general term and Okinawan Kobudo. Kobudo is a general, collective term for all Japanese arts that involve weapons and armor. Also, horsemanship techniques fall under the term as well. In translation, Kobudo means “old martial arts”.

Okinawan Kobudo would, therefore, only be one of the types of Kobudo. That is the type commonly associated with Karate and resembles the Karate movement the most. It was developed in the same area as well, and practitioners often learned both at the same time.

As for the “old martial arts”, they had a different purpose and meaning from modern martial arts. Even Karate today is a competitive sport. The goal is to win a match, bout, or any other sort of competition. Old martial arts weren’t taught for competitive purposes. They were taught and learned for mental and physical conditioning, and firstly, for self-defense. They often included very dangerous techniques and handling of weaponry requiring a lot of skill.

The mental, almost religious character of the old martial arts is very highlighted. They are often very close to Buddhism and Zen teaching, which stand for peacefulness and calm of the mind. Also, the movements are often esthetic in nature and can seem irrational when picturing them being used in battle, but it was all about teaching focus, discipline, and form.

As people of Okinawa couldn’t have any weapons by law, they developed barehanded techniques such as Karate first, using ancient Chinese arts as a background. They started implementing everyday objects into their training, such as pepper mill handles (tonfa) or wooden sticks (hanbo). That resulted in the birth of Okinawa Kobudo.

The weapons were of all kinds: bo, sai,  nunchaku, surujin, and kama, to name a few. You can still learn the old arts today. But, you should have professional tutoring to avoid injury with the weapons.

Check out our article about kobudo if you want to read more about it.

As we stated, Okinawan people used many different objects as weapons. Each weapon comes with different techniques and kata to learn and were used in different ways. But, they were all based on the same principles and movement patterns. Training Karate with weapons could be very useful in self-defense, but you should be careful when performing with any of them. Use foam versions if there is a possibility to get one.

The nunchaku (also known as nunchucks) is probably the most well-known Karate weapon. They were particularly popularized by classic Asian martial art movies. Bruce Lee was the biggest star known for his expertise with the nunchaku.

The weapon is made of two sticks (most often wooden) connected with a short piece of chain or rope. Their primary purpose was actually for training because practicing with them immensely develops hand quickness, precision, and hand-to-eye coordination. Nevertheless, they can be used very effectively in combat as well, if you learn how to handle them properly

The traditional nunchaku is made of wood, but modern versions of the weapon can be found in fiberglass, plastic, metal, rubber, or even foam. The old Okinawan nunchaku was, like almost all other weapons, stylized from an everyday object. They used a tool resembling a baton used to thresh rice.

However, at the time, it wasn’t very effective against other weapons at the time, such as swords or long staffs, so its practical use remained mostly in training and kata. There are masters around the world that still teach the craft of nunchaku handling, and it can be very useful to develop your overall motoric abilities.

This particular weapon is very interesting in many ways. First of all, the origins are still very unclear, as to where was tonfa used as a weapon first. It is believed that the first forms of the tonfa were the handles of a millstone used as batons. If you have never seen a tonfa, it practically looks the same as a modern police baton – a longer sting with a handle at around 1/3 of its length.

As for the old Kobudo tonfa, it was almost always used as a dual weapon (meaning, you’d use two). Traditionally, they were made from hardwood, most commonly oak). They were quite useful in close combat because they allowed very versatile movements without limiting your quickness.

When practicing with a tonfa, there are three different grips from which techniques are developed. The regular grip is called honte-mochi. When grabbing the handle, the longer part of the weapon laying along the arm. From that position, you can use it as protection and dealing greater damage when performing elbow strikes or hooks. Also, blocks are a lot easier that way.

There is also the gyakute-mochi or the reverse grip. You are still gripping the handle, but rotate the tonfa 180 degrees. Now, the longer part is facing your opponent, which gives you more range for thrusting strikes or shortening the distance. The third and most unusual grip is the tokushu-mochi. You grab the tip of the longer part of the tonfa, using the handle as a sort of a pick, ax, or hook. That way, a tonfa resembles a kama the most.

The Kama is a traditional weapon used as a necessity. It resembles a sickle the most and was used the same way as one by the Okinawan farmer. Similar to the tonfa, these were also very commonly used in pairs, and required a lot of skill to handle, due to the nature of the weapon.

As with all sickles, the kama is traditionally made with a wooden handle and a metal blade that is slightly curved. In Karate training, the blade, the sharp point, and the handle can all be used effectively in combat. Some kata show techniques where you can also use the kamas for defensive purposes, such as blocks and disarming.

Due to the dangerous nature of the weapon, training is usually done with blunts or bladeless versions of a kama, until enough skill is developed to wield the real version. If you are considering kama training, make sure not to do it without professional help.

When kama was already in use as a weapon for some time, the Okinawan started to stylize them to be even more effective. Therefore, they started making small nooks at the spot where the handle and the blade meet. It was designed to block and tram wooden staffs very commonly used as weapons at the time, known as bo.

The most simple weapon out of all that we mentioned so far is the Bo. It is a long wooden staff used as a weapon that was the most common object used at the time. There were several versions of the staff developed later, such as the Hanbo and Tanbo.

The real Bo (the long wooden staff) is believed to be developed from a tenbin – the long stick carried on the shoulders with buckets on each end. It was great for use to avoid damage and keep a distance from the opponent while allowing various techniques. You can work defensively and strike from the counter-attack, you can try sweeping techniques to incapacitate your opponents, block strikes, etc.

Hanbo is a middle-length staff that commonly has a similar use as the full-length Bo, but allows quicker techniques and a bit more agility, sacrificing range in exchange. The Tanbo is a short stick meant for close combat, often used as an alternative for the much more popular Sai.

This weapon is one of those we see in movies a lot. Sai is a sort of a mix between a trident and a dagger, with the middle spike being longer than the other two. It was almost exclusively used in pairs and allowed all kinds of techniques, especially when it comes to defense and disarming the opponent.

It is believed that the Sai was first used as a type of a small rake, but was proven to be very effective in battle. The techniques that are presented in kata are often quite flashy, which is why training with this weapon is attractive to a lot of people even today. However, just as with all other mentioned Karate weapons, it is best to train with a safe version of the weapon, made of rubber, foam, or a similar material.

There are a lot more weapons we haven’t had the chance to mention that were used. Some of them are very similar to the popular weapons used today. For instance, Tekko is very similar to brass knuckles used today. Other weapons also had origins in everyday objects, such as the Eku – a type of oar or a boat paddle or a Kuwa – a farmer hoe.