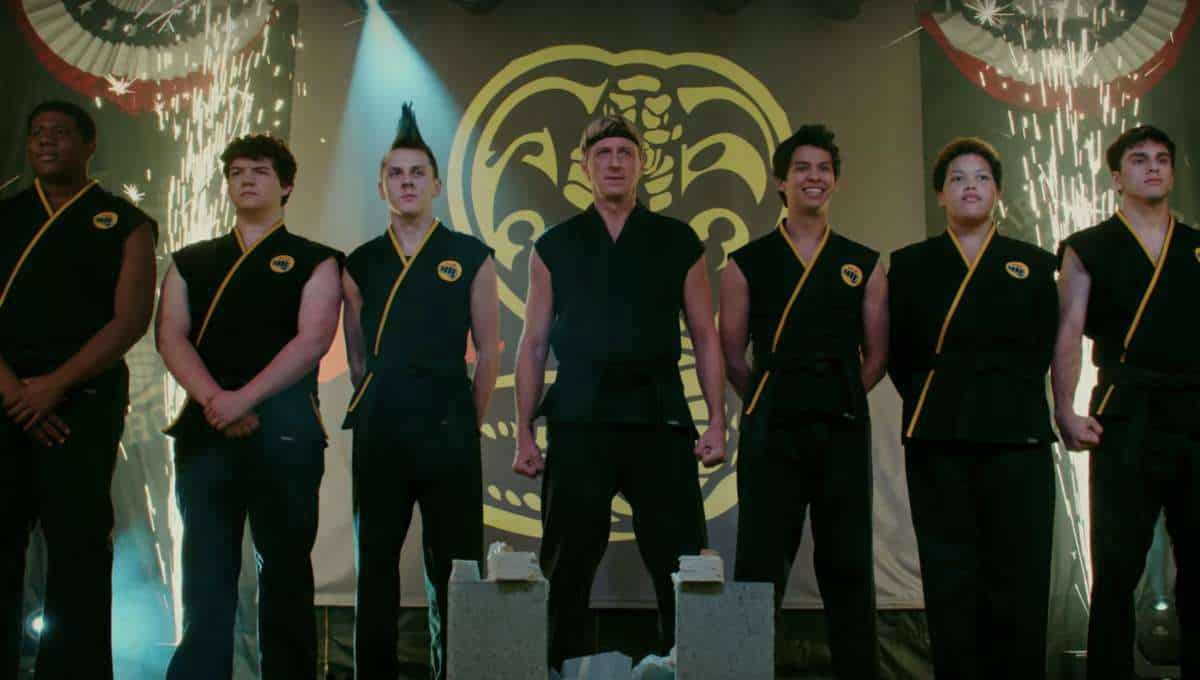 One of the most popular and iconic movies of all time, the Karate Kid gave us much more than a couple of laughs or goosebumps. Rap songs, sayings, jokes, and more are centered around or at least contain elements from this movie, but there is something else we all were introduced to by the movie: Cobra Kai. Ever since the movie came out, people have been flocking to train karate, and to their disappointment, none of the actual dojos are like the Cobra Kai training method shown in the movie. So what style of karate is Cobra Kai?

Cobra Kai is a non-traditional, fictional form of fighting made up for the sake of the film, which has elements from traditional Goju-Ryu and Shito-Ryu but doesn’t specifically belong to either of them.

However, it does have some basis in reality. It is not a real, traditional style of fighting, but the movements are actually very real and are parts of different types of karate, merged together to form a style that is palatable and fun to watch. After all, they were going for the cinema experience, and not the dojo experience when making this film. Read on if you are interested in the roots of Cobra Kai in real Okinawan karate!

Contents hide
What Style of Karate is Used in the Karate Kid?
Do Cobra Kai Actors Know Karate?
Is Cobra Kai a Real Dojo?

What Style of Karate is Used in the Karate Kid?

The Karate Kid is one of the most popular movies of all time not only because of how it introduced the Western public to Eastern martial arts (after Bruce Lee, of course), especially karate but also because of the specific, eye-catching style used in the movie. As we mentioned earlier, many people were motivated to train karate after the movie aired, though not many people trained the art they saw on the movie canvas. So, which style is it?

According to most internet sources, the Karate Kid movie “style” is clearly made up, with most websites calling it a “movie-fu”, however, it does have its origins in a very prominent karate style, called Goju-Ryu. Goju-Ryu is a highly effective style of karate, originating from Okinawa. The reason Mr. Miyago is named that way is that in the movie, he is the descendant of the founder of Goju-Ryu, called Miyagi Chojun. This isn’t clearly stated in the movie, but there is a scene in the movie series where Mr. Miyagi’s picture is hung next to Miyagi Chojun’s, while he is telling the story of how the style was created. We have an article dedicated to Goju-Ryu, so check it out if you want to know more!

However, some other, perhaps more expert sources have pointed out that first of all: half of the moves in the movie are made up, for cinematic purposes. This isn’t a surprise, nor is it a crime since it isn’t a documentary, rather a family movie meant to entertain. Second of all, they pointed out a mistake: in some scenes of the movie and the later follow-up movies and the Cobra Kai series (which is based on the Karate Kid world), almost all contain katas (click here for an article on katas) from a style that is not the creation of Miyagi Chojun. They are from a style called Shito-Ryu, founded by Kenwa Mabuni.

In summary, we could say that the Karate Kid created a separate, easily digestible, movie-fu, but that doesn’t mean it isn’t based on real karate. This is probably what made it so exciting to watch, and also what prompted so many people to want to learn karate.

One of the questions many of us probably ask when watching a martial arts movie, is whether the actors are trained in the martial art they are using in the film. This might be one of the reasons martial arts movies seem so attractive, since they give people somewhat of an illusion, that even though they have never trained a martial art, they can become heroes of it in weeks or months.

Most Cobra Kai and Karate Kid actors have never trained a second of karate in their life. Daniel LaRusso, for example, only trained the martial art for the movie, and never outside of the filming environment. On the other hand, William Zabka stuck with training karate after the first movie and made it all the way to a second-degree green belt. According to some sources, he also had a short past in wrestling.

Though some of the Cobra Kai actors and the Karate kid actors have either stuck with karate or had some minor history with it, most of them learned it just for the sake of the movie, as if it were a stunt to perform (which, technically, it was for them).

Is Cobra Kai a Real Dojo?

Cobra Kai is the karate style made up for the sake of the movie, and it is not a real dojo. The filming scene for the movie can be found in Atlanta, and according to most sources on the internet, it is kept in the Cobra Kai setup as an hommage to the series and the movie. However, it is not a real dojo where you can learn martial arts.

Even though there were a couple of real, professional karate instructors on set, and also in the movie, the Cobra Kai style is not something that can be found outside of the movie. It came as a convenient way to merge reality and fiction since we probably all know that the best lie is the one that is a half-truth. With the solid basis in Goju-Ryu and also Shito-Ryu, the producers, with the instructors and masters on set were able to create a style which is perfect for a movie that is meant to capture attention and keep viewers hooked, however, don’t think that learning Cobra Kai you will fare well in the real world.