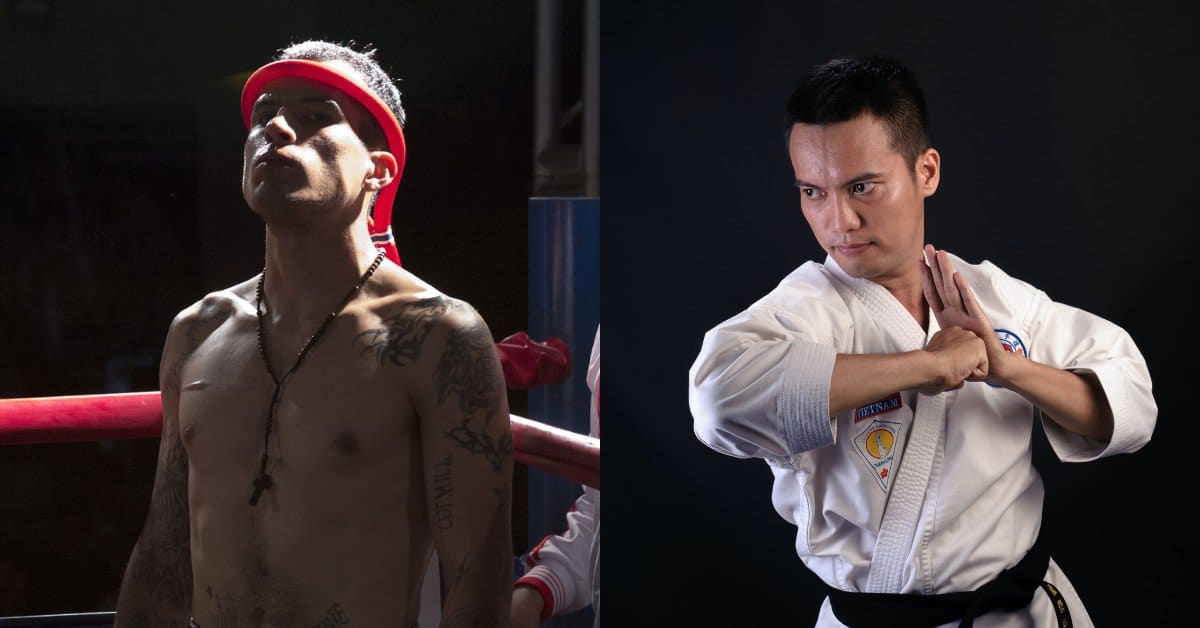 Both Muay Thai and Karate are ancient martial arts that have Asian origins. However, the differences between the two are large. While Muay Thai is best compared to kick-boxing, Karate has more in common with Kung-Fu. Both can be used effectively in combat, especially for self-defense, but they focus on different strategies and methods of neutralizing the opponent. So, what is the biggest difference between Muay Thai and Karate?

The major difference is in the power of impact. While Muay Thai strikes are more forceful and do more damage, Karate is based on quickness and precision. Also, Muay Thai focuses on using clinch elbows and knees as weapons. Karate has these kinds of attacks in theory.

Of course, many other big differences can be spotted, like stance, footwork, or technique, but there are also glaring similarities. That’s stemming from the fact that both of these martial arts have developed by mixing other ancient martial arts and creating something new. Let’s dive a bit deeper into both disciplines and their development.

A little bit about Muay Thai

Muay Thai, as known as Thai boxing, is a Thailand-native martial art that was developed centuries ago. The first mention of it dates back all the way to 1548., and in the 18th century, it was introduced as a mandatory class in all schools. However, the true development into what it is today became in 1921., when the first matches and tournaments were held.

At first, Muay Thai fighters fought bare-knuckled. No gloves were involved, only bandages to protect the wrists. Also, most of the matches were set for 11 rounds, 3 minutes each. Nowadays, professional Muay Thai fighters compete with gloves (regularly 6Oz). Also, they fight a maximum of 5 3-minute rounds, but most of the other rules remained the same.

However, due to the nature of the sport, Muay Thai martial artists are extremely tough and resilient, because their training can be brutal. From kicking down trees with their shins to getting kicked in the gut repeatedly in practice, these guys are as tough as they come in any martial arts in the world.

Other than elbows and knees, the most devastating blows in this sport come from roundhouse kicks with the shin. The low-kicks to the front leg of your opponent are essential in Muay Thai. They allow you to limit their movement to set up your attack more effectively and easily.

Muay Thai vs. Other Martial Arts

It is hard to compare martial arts to one another because most of them are completely different in nature. So, the best way to see how one fares against the other is through the development of mixed martial arts. Today, as MMA developed, Muay Thai fighters have enjoyed a lot of success in that combat sport as well.

Although it may not be a perfect indicator due to other martial art methods having to be implemented into any fighting style in MMA, the success of fighters that are primarily Muay Thai specialists is uncanny.

As we said, the fighters are versatile, used to getting into clinches, and a lot of Thai boxing schools even teach grappling. So. the adjustment to the new rules and techniques comes easier to them, especially if they can keep their opponent on their feet and avoid takedowns.

That being said, some of the best MMA fighters – both today and in history – are primarily Muay Thai fighters. Most notably, Valentina Shevchenko, Anderson Silva, and Jon Jones – all of who are considered among the greatest of all time.

That isn’t saying Karate fighters don’t have success in combat as well, but the nature of the sport has limits in strength and contact. Also, it limits its effectiveness against other, more aggressive martial arts.

The literal translation of Karate means “empty hand”, and it says a lot about the fighting style it implements as well. It is combat without any weapons, meant strictly for self-defense. The techniques are developed in a way that can incapacitate the opponent as quickly as possible, without any unnecessary damage.

This ancient martial art has been developed on Okinawa island in the south of Japan, where the influence of old Shaolin and other Chinese martial arts started the development of a new technique, known back then as Te.

Not until 1930. has Te been recognized as extremely useful both for the physical and mental state of soldiers. That’s when the Japanese emperor asked Okinawa martial artist Gichin Funakoshi to perform a demonstration. Later, Funakoshi added the prefix “kara” to the name, and the rest is history. He is known as the father of modern Karate.

Kihon translated as “basic technique”, which gives you a better picture of what it is. Here, you learn all the basics of Karate – the stance, blocks, punches and kicks, takedowns, etc. A beginner learns Kihon along with the second part of training – Kate (or Kata).

Kate puts Kihon into motion. It is a combination of moves in an orderly fashion which enables the fighter to feel their balance, and ultimately enhance the decision-making, focus, and quickness in real combat. Today, they have more of a demonstrational purpose, but Kate competitions are still held.

Finally, combining the skills garnered both from Kihon and Kate, Kumite is the battle part of Karate which we see in tournaments today. The types of combat vary, from more to less contact, the distance between opponents, etc. But ultimately, none of the disciplines allow full-contact between the fighters.

That is why many believe that Karate can’t compete in real combat against other martial arts. However, if the fighter can adjust the strength of their kicks and punches to full-contact combat and combine them with their speed and balance, it can be quite a dangerous martial arts.

What are the differences between Muay Thai and Karate?

By now, you’ve probably already seen a lot of differences between the two, so let’s categorize them into segments to understand them properly: stance, impact, and technique.

The difference in stance, posture, and movement stem from different origins of the sports. Muay Thai, as we stated, is a kick-boxing discipline. Therefore, it uses more of a boxing kind of movement – side-to-side, cutting angles, and holding the primary stance firm on the feet to maximize the force behind each hit.

On the other hand, karate has a basis in old Chinese martial arts, that rely on balance, lateral quickness, and quantity of strikes, not their power. Therefore, Karate fighters have a more light-footed stance, trading power of impact to maximize agility, balance, and quickness.

Also, due to the nature of the sports today, Karate fighters tend to hold their hands far lower in their stance, because, in most tournaments, punches to the face are forbidden. Muay Thai fighters hold their hands high while tucking in their chin to avoid taking damage to the jaw.

One major difference that we mentioned before is impact force, Muay Thai being much more aggressive from that point of view. However, we haven’t discussed impact points that much, which are primarily the reason why power between the strikes is so different.

Karate fighters will use the ball of their foot for leg strikes and rarely use punches to the head, using their hands mainly to block the opponent’s attacks. Knees and elbows are very rarely used.

Muay Thai fighters, however, kick with their shins with insane power and use limbs as weapons including fists, elbows, knees, and heels. Recovery time between two strikes is a bit longer than in Karate, though, which may allow the other fighter to dodge incoming attacks.

When talking about technique, we are addressing the differences in approach when it comes to the means of incapacitating the opponent.

Muay Thai fighters are focused on dealing as much damage as possible to all body parts – legs, body, or head. They do it in aggressive, forward-motion action.

Karate fighters, on the other way, look to disable the opponent as quickly as possible, using as little exertion as possible. They will block an impact, and try to turn it into their favor, either with a quick in-and-out combination, or a fast takedown.

What are the similarities between Muay Thai and Karate?

One glaring similarity between the two is the fact that they are both primarily striking styles of combat. They both rarely use takedowns and grapples and focus on finishing the fight on the feet, rather than on the ground.

Of course, their roots are both in Ancient Asia, so some training principles and life philosophies are also similar, such as meditation and body movements used for mental preparations. However, that is the point where the two martial arts part ways, as the methodology of combat, starts to diverse.

We can easily say that the two might have had more similarities in the past when used as military skills and combat martial arts, but where they are nowadays as sports, they have many more differences than they do similarities.

Which is better for self-defense: Muay Thai and Karate?

With all that being said, we’d say that Muay Thai today is superior to Karate when it comes to self-defense. First of all, this martial art is based mostly on self-defense and also teaches how to defend yourself from multiple enemies at the same time.

It teaches how to combine incredible footwork with a strategy to exploit your opponent’s flaws and turn defense into explosive offense. Also, we cannot ignore the power that Thai boxing possesses, while Karate today limits the impact force a fighter can implement.

Of course, Karate can also be used very effectively to defend yourself from attackers, but if they come at you with brute force, you won’t be able to respond solely by using Karate. Again highlighting – the Karate that is taught today in gyms around the world.

Karate will teach you how to block the attack, and quickly neutralize the opponent, but not with too much damage, so there is a possibility they will come at you again. Hence, Karate is a good way to give yourself some time to escape and avoid unnecessary damage, but it won’t allow you to stop your assailant from coming at you.

So, to conclude, if you want power and resilience, Muay Thai is the right choice for you. On the other hand, if you think your strengths lie in your quickness, agility, and balance then you should probably go with Karate.