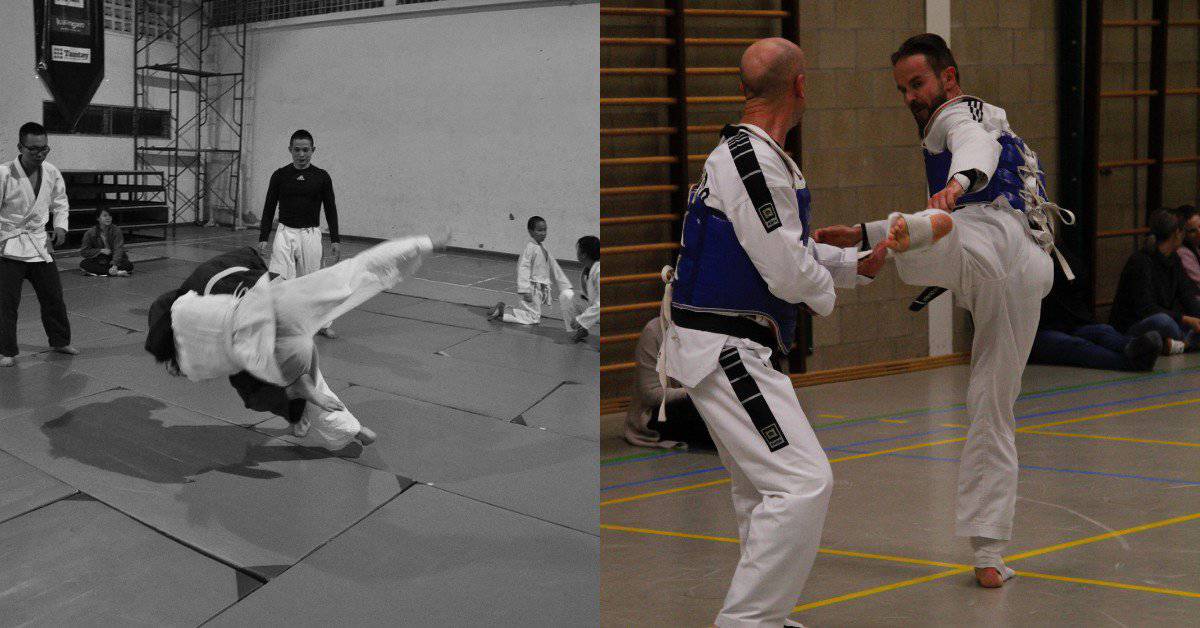 The number of Eastern martial arts is comparable to the number of pizza types in the world. There is a lot of them, to say the least. There are, however, a couple you have definitely heard of, like Karate, Judo, Jiu-jitsu, or Taekwondo. Out of the styles I mentioned, Karate and Judo are probably the most widespread. They can be found in any city or town anywhere in the West. Unfortunately, not many people know much about different martial arts types and also have a tendency to mix up these two styles and regard them as the same. In this article, we tried to collect some info on what exactly are the differences, in order to give an answer to anyone who is interested. So, what is the difference between Judo and Karate?

Judo and Karate are very different in almost all aspects in which martial arts can be analyzed, however, the main difference is that Karate is a striking art while Judo is mostly grappling. This means that usage, intensity, and experience is almost completely different.

But that isn’t all. We wrote this article to break down the difference somewhat more. These two martial arts are different in many ways, and one who wants to start studying either of them should be aware of what they are starting and how they can possibly use that knowledge later on. Read on to find out more!

Contents hide
What are the differences between Judo and Karate?

What are the differences between Judo and Karate?

The history of these two martial arts is radically different, and it is one of the main reasons they are also so unlike one another.

Karate has origins in modern-day Okinawa, with Gichin Funakoshi being considered as the founder of the most widespread style of Karate, Shotokan-do. Karate was created on the Ryukyu islands, by people wanting to defend themselves in a time when weapons were banned. Originally, Karate meant Chinese Hand, and many people credit Funakoshi to be the one who changed the meaning of the word to Empty Hand instead. The reason it was originally Chinese hand, is that Karate was heavily influenced by a Southern Chinese style of Kung Fu, the Fujian White Crane. All the styles it developed from were mostly made up of punches and kicks, open and closed palm strikes, blocks, and straight movements overall.

Judo is a derivate of Jiu-jitsu, the Japanese martial art based on locks, throws, and grappling. There was a decline in the respect towards Jiu-jitsu in Japan, and as it slowly started to fade out, Jigoro Kano thought it would be a good idea to reintroduce a similar martial art with a somewhat different concept and a different name. So he changed the original name Jujutsu into Judo, switching out the jutsu part which is a term used to depict a collection of physical techniques, to do, which means way. This way he created a more welcoming term which also portrayed the more philosophical side of Judo. One of Judo’s central ideas is ju yoku go o seisu, meaning “softness controls hardness”. This means that a weaker opponent can overcome a stronger one by use of their own momentum, this way being the softness that controls hardness.

Here, one of the major differences between Karate and Judo can be found: the techniques. They are massively different, with barely any similarity between them.

Karate is a striking art, with only a couple more traditional derivations implementing some level of grappling. 99% of Karate training had to do with punches, kicks, and blocks. It is a very linear art, no rounded motions, no jumping, nothing fancy. It is about being stationary while not fighting to minimize power usage while it is possible, and then quickly contracting all muscles at the time of the attack in order to deliver a quick, straight, and powerful strike.

Judo has almost nothing to do with striking. It is called “the soft way” for a reason, even though there isn’t much that is soft about being insanely whipped onto the ground in a flash. Judo uses balance and momentum to beat the opponents, by grabbing onto control points of the body (usually points of the body with the least balance or ones with the largest possibility of becoming good levers) and then slamming them to the ground. It is not as fast-paced as karate can be and the movements aren’t as flashy, but it can be just as dangerous.

This question is a slightly technical one. The body parts used do differ, but differently than one might suspect.

In Karate, the limbs, down from the main joints are the main body parts used. That means elbow to fists on the hands, and knee to feet on the legs. All the bones in these areas are used to strike (elbow strikes, shin strikes, kicks, punches, open-hand punches, etc…), but nothing more than that. Throws and locks are rare, so the aforementioned body parts are the ones used in fights.

In Judo, however, the situation is a bit more complex. One might say that they also use their arms and legs to tackle and grapple with their opponent, but actually, the force is generated mostly by the hips and the legs. The legs aren’t used for their brute force but rather their ability to quickly shift the balance of both the attacker and the defender, after which the hips usually play a big role in the execution of the throws themselves. Just as with almost any other wrestling/grappling art or sport, the emphasis is on full body and core strength rather than arm or leg strength, so we could say that Judo is full-body, whereas Karate is primarily focused on the limbs.

Here, the difference is almost non-existent. Both arts have similar equipment in both traditional and more modern schools. The traditional, of course, doesn’t require any sort of equipment.

Both are trained on tatami flooring most of the time to avoid potential injury and reduce the impact on joints and bones when falling, which is obviously more important for Judo, seeing as a Judo class mainly consists of students slamming each other to the ground non-stop. In more modern schools, head-, shin-, mouth-, groin-, and other types of guards are required.

The difference is that Karate schools require these guards more often than Judo schools since Karate is based on striking and can injure these body parts a lot more easily. Many Judo schools have scarce or no equipment at all, even in the modern parts of the world.

Both martial arts, however, require wearing gi-s, which are traditional Japanese clothing that almost all martial arts from that region use. There is a slight difference between Karate and Judo gi-s, which is that Judo requires more heavy stitching in certain areas and thicker collars as well to endure the wear and tear of grabbing the clothes of the opponent to throw them.

Judo relies a lot on the leverage gained by holding the collar or the clothes at the hips, knees, or shoulders to properly execute a throw, which makes it necessary to make thicker gi-s for Judo, but the basic concept of the clothing is the same: a deep-necked shirt with long sleeves (either like a jacket or like a pullover), loose-fitting pants and a belt to hold it all together.

One of the more frequent questions when it comes to martial arts is their effectiveness since people want to learn these arts in order to defend themselves and their loved ones. So how do Karate and Judo fare in these terms?

Karate teaches a lot of techniques that can be used in a street scenario. Although the blocks are usually unrealistic, the speed, the spatial awareness, and the strike strength gained from learning Karate will definitely give a major edge to a Karateka over the layman. One properly executed front kick or punch can easily end the whole fight almost before it began.

Judo is also very useful for street scenarios, probably more effective than Karate in one-on-one altercations. The reality of violence is totally different than what people think and practice in controlled situations like in class. The fact is, fights on the street or in a bar are fast and unpredictable, and they also usually end up being much more close-range than people like to think. This is where Judo excels; it teaches valuable techniques to deal with close-range scenarios. If someone attacks you in a bar, you might have trouble kicking them or even taking up the wide stance that Karate usually uses. With Judo, however, as soon as they reach near enough for you to grab onto their arm or perhaps clothing, you will be able to finish it in the span of a couple of seconds.

The place where Judo doesn’t perform well is with multiple attackers. Of course, it is very valuable in those situations as well compared to someone who doesn’t know anything, but the fact is that Judo often ends up on the ground, which is the absolute worst place to be in a street fight.

Karate might help you remain on your feet and try to quickly finish one or two opponents to reduce the chances of them ganging up on you when you are lying on the floor, in which case not many martial arts are able to help.