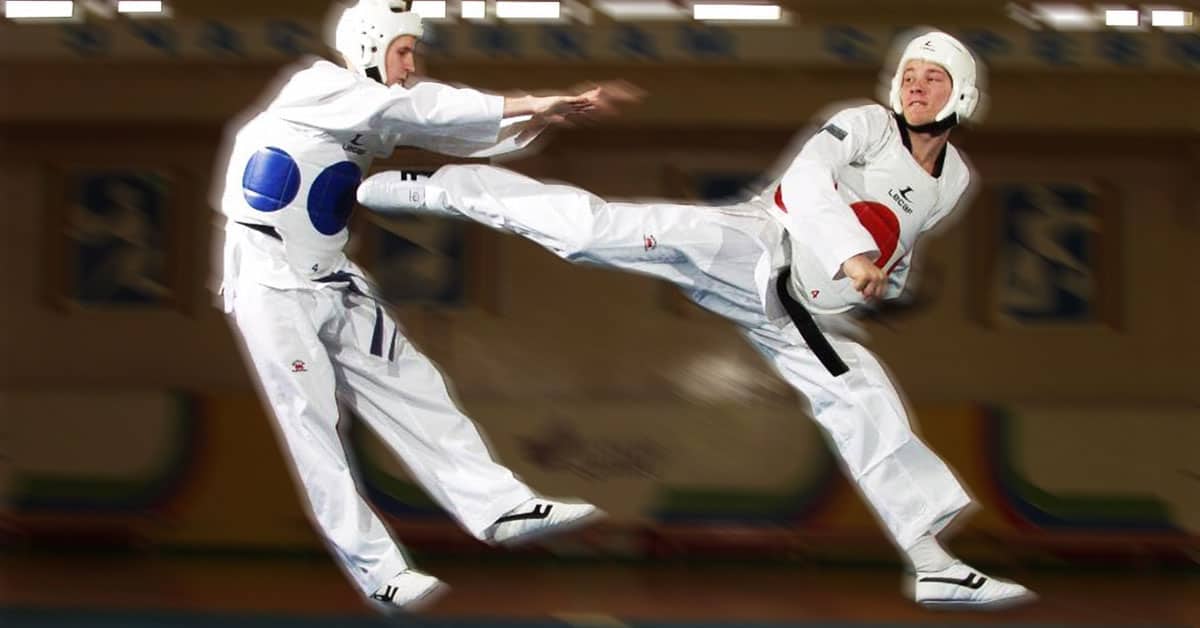 As with most other sports and physical activity, your body type matters when it comes to martial arts as well. If you are aspiring to become an Olympic swimmer, but your arms are short and your feet are small, there isn’t much chance you will get ahead. In the same way, the body type you have can and will influence your success in a given martial art. Of course, just as you can swim if you have short hands, you can train any martial art with any body type, but in order to get the best results, you need to adjust. In today’s article, I will be answering a question within this topic: what is the best martial art for tall people?

Taekwondo is one of the best martial arts for tall people, but some others like Muay Thai or Brazilian Jiu-Jitsu are great as well. Long limbs are generally an advantage in combat sports, but the mentioned arts are the ones best suited for tall people.

There are many tall martial artists out there, take Stipe Miocic for one, a Croatian-American, who is around 6’5”, and is one of the best (if not the best) heavyweight mixed martial artists of all time. Being tall is a great advantage if you can use it wisely, and in this article, I will talk about how taekwondo is one of the best places to start, and I will also mention a couple of other martial arts which you can train effectively if you are tall. Read on if you are interested!

Why is Taekwondo Good for Tall People?

Choi Hong Hi, a Korean military general, is credited as being the “founder” of Taekwondo. When developing the art with the other masters, Choi wanted to create an art that can deliver the most powerful strikes, and do that as efficiently as possible. This is when he came up with his Theory of Power, which is a set of rules, observations, and ideas on fighting, mostly based on Newtonian physics and rational thinking. (Click here for more articles on Taekwondo!)

One of the main points of this theory is that speed is more important than mass when it comes to generating power for strikes. This is very important since it is one of the foundational reasons behind taekwondo being a kick-based art. Some basic physics and logical thinking can tell us, that if we are, for example, rotating a wooden stick or pole from left to right, kind of like swinging it for a strike, the part of the stick which is in the wielder’s hands will travel around a foot or so, whereas the end of the stick will travel a lot more than that (depending on the length of the stick). The important part is that it happens in the same amount of time, which means that it has to move a lot faster than the inner part of the stick.

Why is this important? Well, such high speeds (and thus great forces) can be generated easily with such objects (long, pole-like), but also with one’s legs. One of the reasons Taekwondo is kicking-based is because the legs are the longest limbs on the human body, and the foot can travel a lot faster than a fist can, simply due to the previously described physics. Aside from the insane amount of speed generated, throwing the hips into the strike puts a lot of mass behind the strike too, making it immensely powerful.

Here we get to why it really is a great art to train if you are tall. Being tall comes with a pretty much inevitable “side effect”, and that is that you will have longer limbs and a longer reach than other people. The best way to make use of long limbs is to use the length to generate powerful kicks, and the height to increase the torque of the strike and also the distance you can kick at. A person of average height will not even feel in range when you can already kick them with an insanely powerful kick.

Is Taekwondo Useful for Self-defense?

Generally, I would say that Taekwondo isn’t all that good for self-defense. Yes, you can kick hard, but there are so many weak points of the art, that it is quite easy to get around. However, if you are tall, the case is somewhat different.

See, as described in the previous section, being tall gives you both a power advantage and a speed advantage, especially if you train Taekwondo. This is why, if you are exceptionally tall, training taekwondo can be a great self-defense tool, since you will have an exceptional range as well. You can easily get out of tough situations with larger steps. A step back can increase the distance between you and your opponent, or you can just swing a roundhouse kick at them when they have barely put their hands up yet. The choice is yours, just make sure you are fast about it and don’t let your opponent close the distance too much, because Taekwondo won’t really help you at that point.

If you aren’t into Taekwondo, you can look into a couple of other disciplines that will enable you to utilize your long limbs and reach. One of these is Muay Thai, which will teach you to not only kick and strike long-range, with devastating power but also how to fight close-range, with your knees and elbows.

However, if Muay Thai isn’t your piece of cake, and you aren’t a big fan of striking, you can take a look at Brazilian Jiu-Jitsu. It is a grappling art that uses a lot of joint-locks and uses bodyparts to leverage extremely painful and also effective holds, chokeholds, and similar. With long legs and arms, you can tie your opponent up in knots with ease, and you can also use your longer limbs as levers a lot better than a shorter person can. At the end of the day, choose what you enjoy training the most!