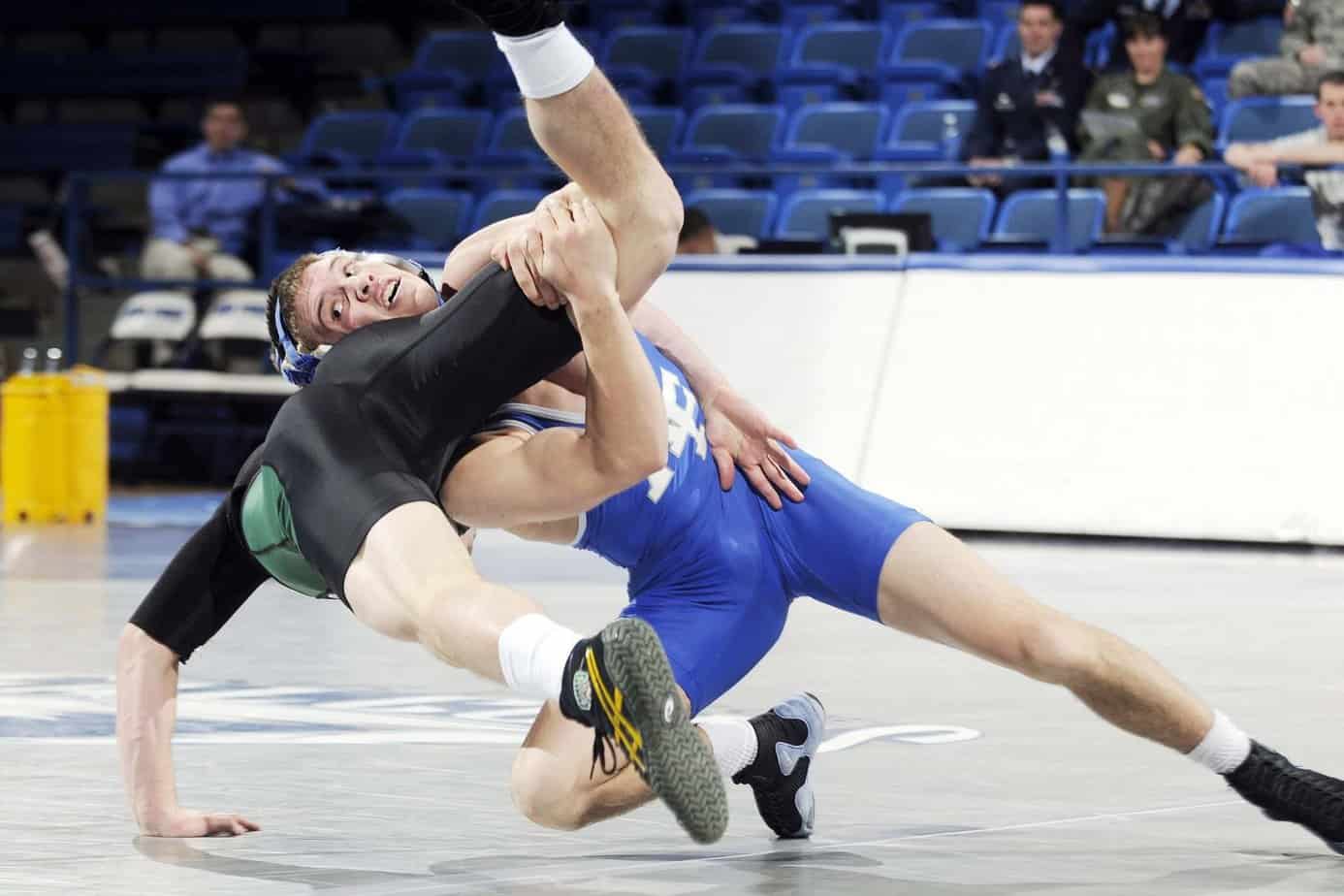 When starting with amatuer wrestling, one of the most common questions is what should you wear under a wrestling singlet?

If you’re interested in amateur wrestling, you’ve probably wondered about what other equipment you’d need. Well, if you have – we have the answer for you. In this article, we’ll be presenting you the main attire you need for amateur wrestling on any level, because the rules are unified for all divisions and categories. Unlike some martial arts and combat sports, amateur wrestling has a unified clothing style that is strictly prescribed and can be altered only in rare and exceptional cases, as we’ll soon see. So, if you want to prepare your wardrobe for a wrestling career, keep reading.

The main, basic piece of wrestling equipment is a wrestling singlet. It is a specialised uniform worn by amateur wrestlers during official matches. It is a one-piece, tight-fitting uniform, usually made of spandex, lycra or nylon (or a combination thereof).

The design of the singlet is practical. Two-piece uniforms used in most martial arts are not that practical for wrestling, because it is a full-contact martial art where you win by physically submitting your opponent. There is a lot of direct contact and you cannot win unless you grab, push and pull your opponent.

This is the same reason the singlet is tight-fitting. This fact hinders the wrestles from grasping each other’s uniforms, which is likewise an illegal move in amateur wrestling. This also allows the referee’s to clearly see all the moves made by the wrestlers during a match.

A singlet is worn by both men and women, with a difference in the cut – women’s singlets usually have a higher cut than men’s.

As for the colours, a singlet is usually in the colour of a fighter’s respective team, while outside school and collegiate wrestling, the singlets are usually red and blue, like in the Olympics. Interestingly enough, singlets have been banned in school and collegiate wrestling until early 1970s, when the NCAA replaced the until-then-used shirtless uniforms with singlets.

As for the cuts, a singlet has three types of cuts – the high cut, the FILA cut and the low cut. The first one covers most of the upper body and reaches the under-arms on the side; it is usually used by women. The FILA cut is similar to the high cut, but it does not rise up as high as the high cut.

These two cuts are the only acceptable ones at the Olympics and World Championships. Low-cut singlets are the most revealing and reach down to the middle abdomen and the hips. They are the most practical in a match, but are banned in bigger competitions.

Although not required, singlets are not uncommon in professional wrestling as well.

Do Wrestlers Wear Cups Under Singlets?

Generally speaking, wearing other clothes above or under a singlet is strictly prohibited. A t-shirt might be permitted, but only under special circumstances, such as certain dermatological conditions, that require extra protection for the skin. Women are allowed to wear a sports bra under their singlets.

As for underwear, wrestlers have three options – nothing, a jockstrap or regular briefs. A jockstrap was very popular – and even obligatory in junior and scholastic categories – for a while, but that changed over time and they’ve become less and less popular as the years passed; today, junior and scholastic wrestling doesn’t require the use of a jockstrap, but prefers regular briefs over them and absolutely nothing.

Other Pieces of Wrestling Equipment

Wrestlers are required to wear specialised shoes. Wrestling shoes are similar to boxing shoes (we’ve talked about the difference in a separate article), but are still different and are almost completely different from other sportswear. They are light and flexible, thus allowing for better movement, but they still have strong ankle support, which is essential in wrestling.

If a wrestler has laces on his wrestling shoes, they have to be covered during a match in order to not come undone and interfere with the match itself.

As for the headgear, its usage is not universally required. It is required in American scholastic and collegiate wrestling, but not in other styles and competitions, where it’s optional.

The main focus of these different types of headgear is the protection of the head from serious injuries, but also to protect the wrestlers from developing cauliflower ear. We’ve already discusses this issue in a separate [article], so be sure to check that one out as well.

As you can see, the attire for amateur wrestling is pretty specific. The single – in any form or cut – is a necessity, along with specific wrestling shoes. Additional clothes are usually prohibited, while underwear and headgear are mostly optional.

There are some differences depending on the location, style and category, but these are the general rules. Wrestling is specific in this aspect, as the majority of other combat sports and martial arts have – between them – generally similar guidelines, while these present a very specific exception.

And this covers our analysis of the equipment necessary for amateur wrestling. Hope you enjoyed our text and see you next time!