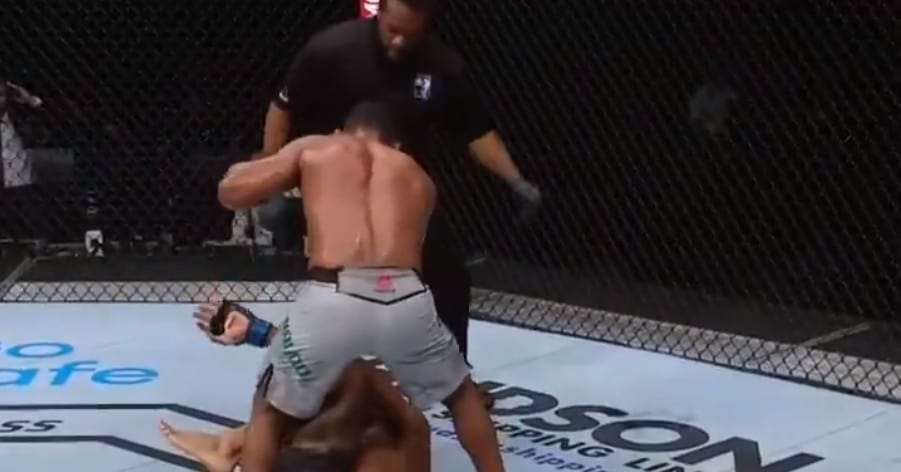 It was supposed to be a brutal ‘walk-off’ knockout. Jai Herbert lay helplessly on the floor with Francisco Trinaldo standing over him and looking at Judge Herb Dean. An interruption was expected every millisecond, but Dean did not react …

Trinaldo, who wanted to act humble, had no choice. The Brazilian veteran delivered several more heavy blows to Herbert, and Dan Hardy roared from his commentary position.

“STOP FIGHT, STOP FIGHT”, as due to the coronavirus pandemic, viewers did not attend the UFC on ESPN 14 show, so very clearly and loudly, even on TV screens, one could hear a retired fighter from Nottingham, and today a prominent analyst and commentator.

Dean received an additional confirmation with a second delay and the fight was stopped.

Trinaldo recorded his third win in a row, and the English fighter his first defeat after six consecutive wins outside the UFC.

In any case, Herbert had a meaningful debut in the Octagon. It was a fight in which he looked great against a much more experienced and well-known opponent until the last round, but unfortunately, his performance, as well as Trinald’s victory, fell into the background due to the controversial situation from the end of the fight.

“I’m doing my job, and now it’s up to you to do yours. Man, so you have to watch out for the fighters,” Hardy complained to Dean after the match, and that the break came too late, Paul Felder concluded.

“Kudos to Trinaldo. He could have rushed in with the punches right away, but he saw what happened and realized the fight needed to be stopped,” the UFC fighter commented.

Stopped in his TRACKS. Never count out 🇧🇷 @MassarandubaMMA! #UFCFightIsland3