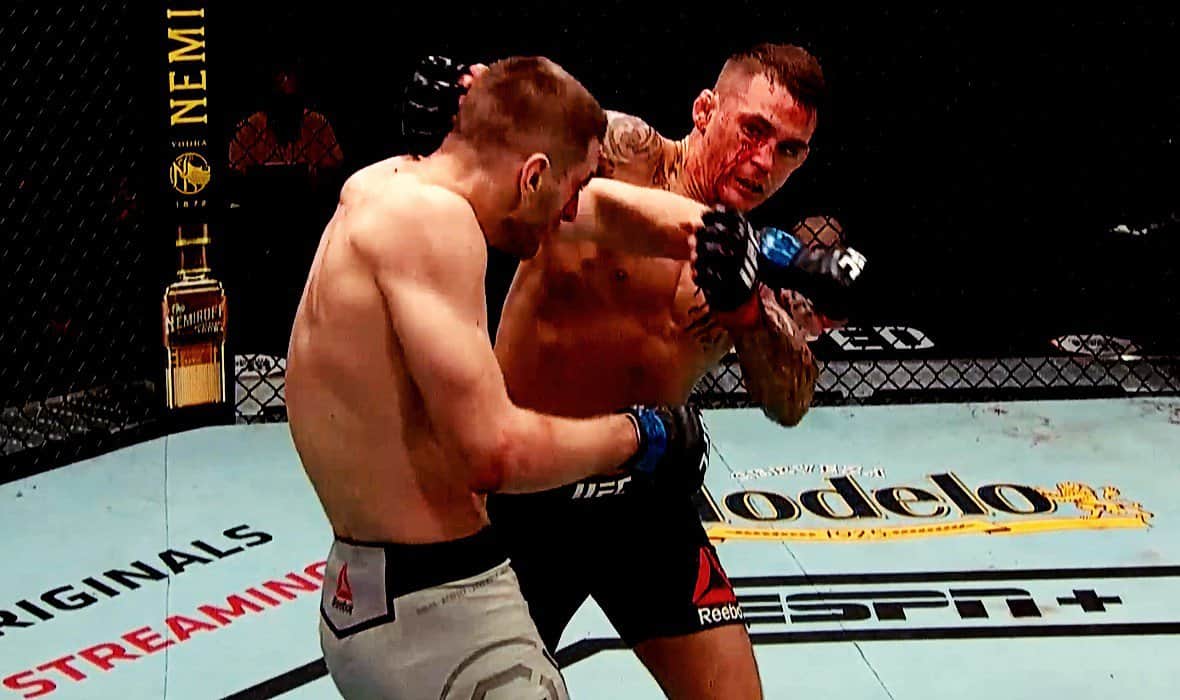 The UFC on ESPN 12 event ended with perhaps the best fight in years.

Dustin Poirier (26-6-1 NC) returned to winning habits and after a nine-month break in one fantastic match by a unanimous decision of the referees defeated Dan Hooker (20-9).

After five consecutive events at the APEX complex, the UFC temporarily said goodbye to its home in Las Vegas in a perfect way – one of the best fights of the year, and that was exactly the main one we watched on Saturday night.

The former interim champion, after 25 minutes of constant action, registered his 26th professional victory, which is the first after he was defeated by Khabib Nurmagomedov in the biggest match of his career last September.

From the first minutes, Poirier and Hooker showed that a very exciting striking clash awaits us. Both fighters combined different techniques and often found a target. There were a lot of ‘kicks’ on both sides, and two were even illegal, but Dustin never asked for a break, but only warned his opponent to watch where he was aiming. Particularly interesting action in this phase of the fight took place in the last 90 seconds when a large number of blows were exchanged from the clinch.

Then we get to the second round, perhaps the best we’ve seen in years. How many bombs were left there is hard to count, but it is a real miracle that they both stayed on their feet. It all started with big and clean shots by Poirier to which Hooker responded with counters. Then a crazy exchange ensued during which Michael Bisping, who on this occasion was in the role of commentator, did not stop ‘screaming’. The rhythm was amazing, and it was amazing how much they could both endure. There was blood on both faces in those moments, and the last 40 seconds brought us Hooker’s crazy series, Poirier was shaken there, but somehow he stays on his feet until the break.

The third round showed us Hooker’s change of tactics. The great New Zealander decided to rely more on takedowns, but Dustin shows how dangerous his jiu-jitsu is, so at one point he catches the guillotine. It seemed very dangerous for Hooker who still manages to get away with it. In the last minute, the fighters are back on their feet where Poirier throws a few strong punches, but Hooker’s chin endured it all.

If the previous rounds mostly brought war on their feet, in the fourth we watched a lot of ‘grappling’. Both had successful takedowns at this stage, and Poirier after one such came into a great position from which followed the rain of his blows. A former interim champion was near one lock on the arm, and he tried to pull out the guillotine as well, but the sweaty Hooker pulled out and concluded the round with a few of his punches.

In the last five minutes, it was obvious that Poirier was in better shape, which was felt in slightly more activity and more precise shots, at least in the moments when the fight was on its feet because Hooker tried to move the action to the ground several times. But the very end of the fight belonged to Poirier, who found himself on Dan and confirmed the victory with a few blows.

‘Platinum’ to victory with his girl in the corner

In the co-title fight of the evening Mike Perry (14-6) broke a series of two defeats and by a unanimous decision of the judges defeated Mickey Gall (6-3). ‘Platinum’ did not have coaches in the corner in this match, but only his girlfriend, but that did not reflect so much on his solid performance.

The first round of this duel brought us good action on both sides and one takedown of Perry by which he may have stolen this section in the eyes of the judges. In the second, we watched a bit more ‘grappling’ during which Perry was mostly in a better position, but Gall persistently threatened with attacks from the back and with one attempt at kimura opened up space to get back on his feet. But it soon paid off dearly. Namely, with two consecutive right-strikes, Mike knocked down Gall and attacked him, but he somehow manages to endure the ‘ground and pound’ and survive until the break. In the last five minutes, Perry looked like a fresher fighter, which he took advantage of, especially when he knocked down Gall in the second half of the round and spent most of the rest of the fight in a dominant position.

We should also point out that Maurice Green stopped Gian Villante by choke in the third round, who moved from the light heavyweight to the heavyweight division for this match. Julian Eros also celebrated with choke, who defeated Sean Woodson at the opening of the main part of the program, and the fastest break of the evening belonged to Takashi Sata, who knocked out Jason Witt in just 48 seconds.

To recall, the UFC is now moving to Abu Dhabi, or Yas Island, where the program will open on July 11 with a major UFC 251 event.