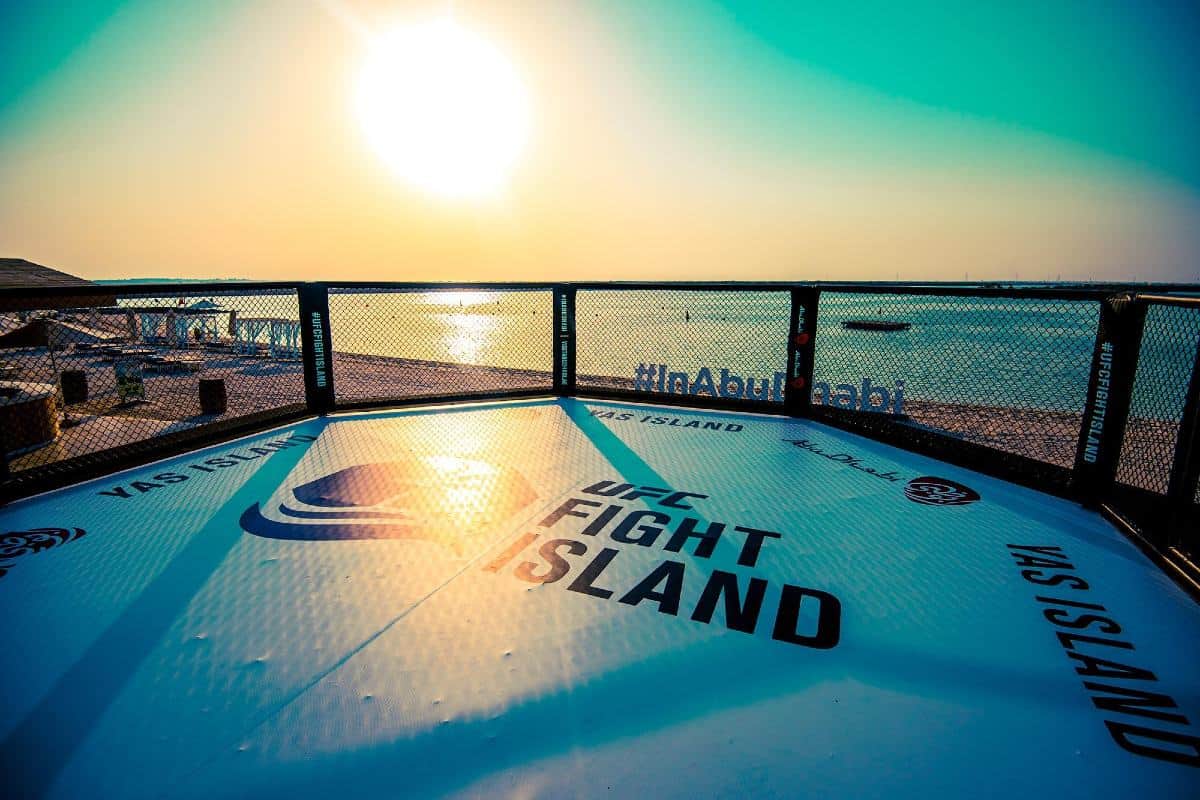 The entire sports world took a massive hit due to the coronavirus pandemic last year, with events canceled everywhere.

UFC was no different, especially considering that MMA is a full-contact sport, making it an even bigger risk amidst the pandemic.

Getting foreign fighters into the United States posed yet another problem for the organization.

That’s why the UFC and Dana White came up with the idea of a private island to host fights.

At first, the idea was laughed at, but White and company actually made it happen.

UFC Fight Island is an actual island in Abu Dhabi, UAE, called Yas Island. UFC Fighters from all over the world are quarantined in a 6 square miles enclosure featuring a theme park, an arena, a hotel, and practice facilities.

Only fighters and staff are allowed at the perimeter, along with media members, and everybody will be tested several times to ensure the venue remains corona-free.

Here’s everything you need to know about UFC Fight Island, how it works, and how you can get tickets to visit.

Is Fight Island an Actual Island?

At first, UFC president Dana White wanted to buy or rent an entire island to hold events there while the coronavirus pandemic affects the world.

While he didn’t quite manage to do that, the UFC Fight Island is as close to that as possible.

The Fight Island events are held on Yas Island, an actual human-made island in Abu Dhabi.

The promotion held events there in the past (most notably, UFC 242: Nurmagomedov vs. Poirier).

As most non-American fighters wouldn’t be able to come to fight in the United States due to the pandemic, the promotion wanted a safe venue where they can hold corona-free events.

While they didn’t get an entire island just for themselves, they did receive a fully enclosed perimeter on Yas Island.

It includes a hotel for fighters and staff, training facilities, the arena, a theme park, and many other amenities to make the fighter’s stay as comfortable as possible.

Other than fighters and their teams, UFC staff (commentators, executives, physicians, etc.), and Abu Dhabi staff that makes everything work (chefs, hotel workers, security, etc.), nobody else can enter the perimeter that’s around 10 kilometers in diameter.

It provides a safe and comfortable environment that adheres to all the pandemic protocols and gives fighters worldwide an opportunity to continue competing.

Where Is the UFC Fight Island Located?

As I mentioned, UFC Fight Island is held on an actual island.

Yas Island, where the events are held, is an artificial island born in 2009 just off the Abu Dhabi coast. [1]

The island is around 10 square miles big, and it includes hotels, theme parks, spectacular beaches, and other amenities – even an F1 race track, where the F1 Abu Dhabi Grand Prix is held.

The UFC fight Island safe zone is around 10 kilometers long (6sq miles large) and locked down for visitors, including Abu Dhabi residents.

There are police checkpoints and extra security to ensure the area is virus-free.

However, as we developed vaccines, a limited number of fans will be allowed to enter the perimeter for the duration of the events.

They’ll need negative tests or vaccination confirmation to enter, though, and spectators will fill the capacity of the venue to a maximum of 20%.

Does the UFC Own an Island?

The initial idea of the UFC’s president Dana White was to buy a private island where the fights will be held.

That would be a colossal investment that would be very hard to make profitable, so the idea fell through.

However, White managed to pull off Fight Island, which is as close to a private island as it can get.

The exclusion zone is at full disposal for UFC and its fighters. They have their shuttles to move around the island and their own planes to get the fighters in and out of the island.

Also, all the island’s amenities are at full disposal to everybody, both athletes and staff members. That includes the theme parks (one of them includes the world’s fastest rollercoaster going over 200km/h), pools, beaches, etc.

It’s a huge financial investment for the promotion, but as it turns out, they managed to make a great deal where they don’t have to pay a massive amount as having a private island would suggest.

Therefore, the UFC doesn’t own an island, but Fight Island is as close as it gets.

How Much Did Dana White Purchase Fight Island for?

As I said, White and the UFC didn’t buy an island but rather rented one to serve as a safe venue.

You can only imagine how much money it would cost to rent such a big island, and it’s obvious that White and the company had to break the bank for it to happen, right? Well, not exactly.

The UFC already has a five-year deal signed with Abu Dhabi’s Department of Culture and Tourism signed in 2019 that obliges the promotion to bring at least one PPV event a year to Abu Dhabi.

But, UFC Fight Island is an entirely separate deal. White thought it would be an incredibly expensive venture, but the deal he got is great for Abu Dhabi and the UFC.

To make everything happen, White only has to pay for what he usually pays – flying in fighters with their teams, paying UFC staff, etc. – the stuff that they pay for every event.

UFC will also pay $150 a day to every fighter. Everything else is paid by Abu Dhabi’s government, surprisingly.

They are paying for the hosting fees, logistics such as COVID-19 testing, hotel accommodation, food, and training facilities, as well as the site fee.

They found that the exposure they will receive in exchange for all the Fight Island costs is far more valuable.

They hope that bringing a global promotion such as the UFC to Abu Dhabi will provide Yas Island with a lot of exposure, leading to a boom in tourism once the pandemic ends.

How Much Would it Cost to Go to Fight Island?

As the pandemic is going more and more silent with vaccine administration, fans can go back to sporting events they enjoy.

However, there’s a strict attendance limit everywhere, and Fight Island is no different.

I’m not going to include the travel costs to get to Abu Dhabi, as they vary depending on where you live.

Also, you should consider the hotel and food fees, which will also vary depending on what you choose.

Therefore, I’ll base the approximation only on the ticket price listed for UFC 257: McGregor vs. Poirier 2.

The attendance was around 2600 people, and the prices of tickets ranged from $215 to $1350, depending on the seating.

That’s probably the same price you’d pay if and when the UFC returns to Fight Island this summer.

The prices may vary depending on the event’s significance (for instance, PPV events are always more expensive than Fight Nights).

When you sum up all the costs (hotel, tickets, transport, food, etc.), it would cost between $1500 and $4000, depending on how luxurious you want your stay in Abu Dhabi.

Is Fight Island Open to the Public?

As I said, the exclusion zone is closed to the public and reserved only for the athletes and staff.

Nobody can enter or leave the zone, as it has to be under quarantine to ensure a virus-free environment.

However, there is limited attendance available for events, each held in the Etihad Arena on the island.

To enter the Arena, you need a valid PCR test no older than 48 hours, even if you were vaccinated.

You’ll also go through thermal scanning and ticket checks. If you show signs of high fever or any other COVID-19-related symptoms, you’ll be denied entry with no refund.

You need a face mask at all times, pay contactless, and adhere to social distancing guidelines.

If you exit the venue, you can’t go back in.

Also, you can’t use any professional audio or video recorders inside, and you have to provide the originals of either your ID or Passport.

All these guidelines were presented for the last Fight Island venture, meaning they could change if the promotion decides to go back to Fight Island once again.

Will UFC Go Back to Fight Island?

After UFC 257 on Fight Island, Dana White said he has plans to return to Yas Island, but not before the summer.

Nothing is set in stone, though, as nobody can predict how the pandemic will develop further into 2021.

It is expected that another multi-event Fight Island venture will happen in June or July, as White suggested.

In the meantime, the events are held at the UFC Apex in Las Vegas.

Dana White has expressed his satisfaction with how everything is organized in Abu Dhabi, so it’s almost certain we’ll see yet another UFC Fight Island stint in a matter of months.