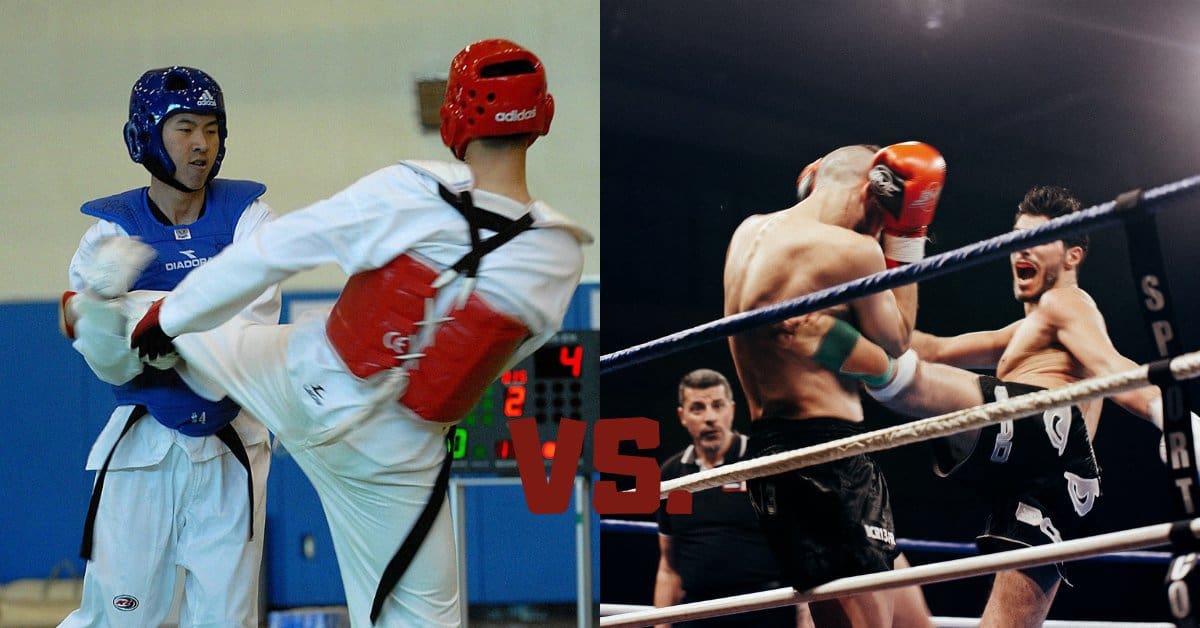 Taekwondo and Kickboxing are two martial arts that have a lot in common at first glance. They both utilize only striking techniques and have a strict stand-up policy in combat. They also emphasize kicking, even though punches are allowed as well, and both are incredibly fast-paced. But, the fact is, they couldn’t be more different. So, what are the differences between Taekwondo and Kickboxing?

Taekwondo is a light-contact sport based on point scoring, while Kickboxing is a full-contact sport that emphasizes force and has a goal of knocking the opponent out. They have different origins, techniques, philosophies, equipment, and even Olympic recognition of the two is different.

Although they are very different, that doesn’t mean you can’t use both effectively for self-defense. When choosing which one is the right for you, the only thing that matters, in the end, is which one you like more. We’ll give you some facts about both to help you with your decision. Maybe you’ll end up wanting to practice both.

What are the differences between Taekwondo and Kickboxing?

You can easily argue that Taekwondo and Kickboxing have much more dissimilarities than similarities. Apart from both being striking martial arts, they don’t have much in common. In this comparison, we won’t compare every technique in existence from both the skills.

We will only focus on the combat sports of Taekwondo and Kickboxing and what differentiates them. That includes the origins, rules, equipment, and technique.

After World War II ended, Japanese colonialism in Korea ceased to exist. After Japan left, Korea wanted its own identity back, so a purely Korean martial art was born – Taekwondo. Although the newly-developed art is young, the techniques it uses go back centuries.

Like Karate, old Chinese martial arts influenced Taekwondo techniques, but most of the main methods of kicking and moving in combat came from an ancient Korean martial art called Takkyeon.

Taekwondo is an abbreviation of three words. Tae, meaning foot, Kwon, meaning fist, and Do, meaning way or path. So roughly, it would translate to “the way of foot and fist.” However, the name reflects Taekwondo’s philosophy more than just meaning you strike with your fists and feet.

Tae and Kwon represent training, mastering the art, both as a martial art and philosophy. Do means the way – the path that mastering this martial art takes you on. It’s not just about learning how to fight, but how to be a better person, avoid conflict, forgive, be peaceful, respectful, and aim for the right thing, not the most convenient.

As for the rules of Taekwondo, they are very similar to Karate point fighting. Full contact is not allowed completely, so you need to learn how to control your strikes and not put too much force behind them. However, Karate is a lot more strict when it comes to the intensity of the contact.

The goal is to score as many points as possible before the time runs out. The matches usually last three rounds, lasting two minutes each, and the fighter that scores the most points throughout the bout wins.

The matches are not conducted in a ring but on a ten-meter long mat. Only forward and backward movement is allowed, as you have to stay on the mat at all times. Grabbing, holding, or any grappling is prohibited.

As for the equipment, the fighters wear a traditional Korean dobok. It is very similar to a Japanese keikogi but has wider sleeves and pants. In competition, you also need a mouthguard, a helmet, gloves, body protection gear, shin guards, and a groin guard, if you wish to wear one. Also, your level of training is determined by your belt color.

Once you reach the black belt, you still have a long way to get to the highest rank because it is divided into Dans.

Finally, Kickboxing and Taekwondo’s big difference is that the Korean martial art has been recognized and inducted into the Olympic games, while Kickboxing is still waiting on that honor.

Kickboxing comes in many forms. Many different styles and arts fall under Kickboxing, but we will focus on the type most people know as the combat sport we’re watching on TV. That style is American Kickboxing.

However, the first American Kickboxing methods were developed because of the desire for full contact among Taekwondo and Karate practitioners. Traditional martial arts are based on peace, calmness. They don’t allow full contact in the sport, so the practitioners combined traditional techniques with boxing and other new methods that included full contact.

There is a lot more force behind every strike. Groin strikes aren’t allowed, but low kicks are frequently used in Kickboxing, unlike in Taekwondo. Also, since full contact and power are mandatory to compete in Kickboxing, the stance and movement are more guarded and cautious in Kickboxing.

Even though the goal is to keep moving forward, it is much different than moving in Taekwondo. You fight in a ring, where side-to-side movement is crucial, so you have to adjust and learn how to cut corners and use the extra space to your advantage.

As for the equipment, you wear boxing gloves, and you fight in shorts. No protective gear is used, apart from mouth and groin guards. The goal is not to score the most points but to knockout or dominate your opponent. If none of the fighters get knocked out before time runs out, the judges determine the winner by grading each round individually.

Also, there is no ranking system in Kickboxing and no belts to determine your level of progression. You train and compete based on weight categories, and you enter the ring when you think you are ready. You’ll fight opponents of the same weight, regardless of how long you are training.

Finally, Kickboxing isn’t, and might not ever be in the Olympics, whereas Taekwondo already is. The International Olympic Committee has granted the WAKO (World Association of Kickboxing Organizations) Kickboxing a temporary, provisional recognition. It has taken the first steps towards being an Olympic sport.  However, there are still many obstacles to pass for us to see Kickboxing in the Olympics.

Which is better for self-defense: Taekwondo or Kickboxing?

If you are thinking of taking classes in one of these two martial arts to learn self-defense, the best option might be to take a different kind of class. That doesn’t mean that either of these can’t help you defend yourself in a street fight, but both are very flawed when it comes to fighting with no rules.

The lack of grappling and ground combat makes you vulnerable to a street fight, where everything is allowed. Taekwondo and Kickboxing are both practiced to fight under strict rules, and everything happening outside of that puts you at a disadvantage in a real fight.

However, it is always better to have a martial art in your arsenal than not because a trained fighter in any martial art will beat a street thug with no real training in a hand-to-hand fight 99% of the time.

One hard low kick will incapacitate most people who have no experience in real martial arts, and you’ll learn to throw kicks and punches efficiently both in Kickboxing and Taekwondo.

But, if we compare which one between the two is better for self-defense, Kickboxing has a slight edge. First of all, you will learn to control the power behind your strikes in Taekwondo, while you’ll be encouraged to unleash as much force as possible in Kickboxing.

The nature of the point fighting sport that Taekwondo is makes the movements and striking more focused on speed and precision over strength and force. That can be a big problem in a street fight if you can’t adjust and deliver blows with full power.

Taekwondo and Kickboxing are both excellent to know and can help you defend yourself, but the nature of the arts and the combat sports behind them can make you vulnerable in a street fight.

Which one should you choose: Taekwondo or Kickboxing?

Finally, the two martial arts are so widely different from one another, and we will keep the answer to this question very simple: it all depends on which one of them you like more, what your advantages are, and what your goals are in the end.

On the other hand, if you want a more hands-on martial art that will toughen you up to the extremes, and if you don’t mind the sport’s demanding full-contact nature, they go for Kickboxing. There are not many workouts in the world better for your physical and mental fitness than Kickboxing.

If your goal is self-defense, and you are keen on choosing one or the other, then Kickboxing can have a more significant impact than Taekwondo and can defend you from more diverse attacks and attackers.