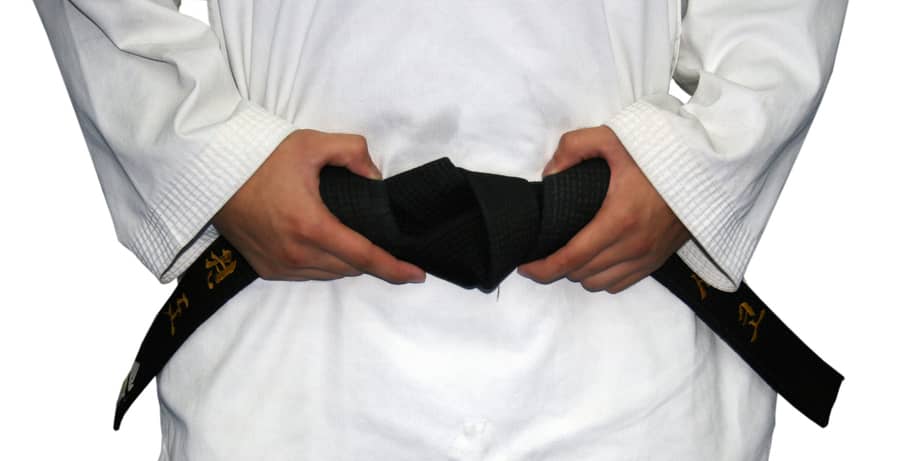 In this article, we are going to deal with an essential aspect of Taekwondo – it’s belt system. It is well known that most Oriental martial arts have a certain system of differently coloured belts that symbolize the level of knowledge each holder has. Taekwondo is no exception, as its trainees are also awarded coloured belts that represent the degree of knowledge of the art each of them possesses.

Each of the belts represents a degree of knowledge, but – as we are soon going to learn – the two chief Taekwondo organisations, WT and ITF, have different standards when it comes to belts.

Contents hide
Origins of Belts in Martial Arts
The Belt System in Taekwondo
How to Achieve a Higher Rank in Taekwondo?
Taekwondo Belt Colours Ranked

Origins of Belts in Martial Arts

The coloured belts in Taekwondo are usually defined as “junior belts” and they represent a student of the art. The black belts are given to masters or instructors, people who have mastered the art and are qualified for teaching it to others. They are also called “senior belts”.

The Belt System in Taekwondo

As stated, the belts are divided into two larger groups – “junior” and “senior”. The former includes coloured belts, while the latter encompasses a variety of degrees of a black belt. The starting colour is always white and the final is level is a 9th degree black belt.

The “junior” levels are called geup (급) and there is, generally speaking, around 10 of them; the actual number varies between 8 and 12, depending on the style and the governing organisation. Each level doesn’t always mean a specific colour; the system is, rather, designed as to include differently coloured stripes that represent a higher degree of the same colour.

The geup system starts with the highest number in the system and continues until the 1st geup, which is the last coloured rank, before attaining a black belt.

The black belts are divided into ranks that are called dan (단) or, in English, degrees. The degrees start with the lowest number (1st dan or first-degree black belt) and reach the final, 9th dan (ninth-degree black belt), associated with the title of grandmaster.

Both WT and ITF have a title-based system associated with black belt degrees. Instructors holding degrees 1-3 are called assistant instructors and cannot issue black belts themselves; degrees 4-6 are associated with the title of master instructor (just instructors via ITF); the last ranks show the biggest difference between WT and ITF – WT associates the title of grandmaster with all the ranks from 7 do 9, while ITF does so only for the final, 9th rank, giving the holders of ranks 7 and 8 the titles of masters.

The black belt is awarded from the age of 15 onwards (the age limit has changed throughout the years and is currently set at 15). That, of course, doesn’t mean that younger children cannot pass dan exams, but they are awarded a special poom rank, which is actually a “junior” black belt (usually red and black in colour). The poom rank automatically converts to a regular dan when the trainee reaches the proscribed age of 15 years.

How to Achieve a Higher Rank in Taekwondo?

The process of attaining a higher rank is called a promotion. Each trainee starts of with the mandatory white belt and achieves higher ranks through promotions. The process of promotion gets more difficult as the ranks become higher, but is usually a presentation of technical and tactical skills the trainee has learned throughout the training process.

Lower ranks usually require not more than a demonstration of different attacks present in Taekwondo and one specific form, predetermined as a skill test for each degree.

Forms are a form of demonstrating the offensive and defensive skills of the trainee, while also demonstrating his or her technical skills. The number of forms depends on the style used (p.e. WT has 8, while ITF has 9) and the forms themselves change regularly, but only to a smaller degree. A successful demonstration of all these necessary skills allows the trainee to obtain a promotion.

Higher ranks usually add more complex techniques, but can also include sparring, simulated sparring, self-defence, breaking skills and even a written test on the basics of Taekwondo.

Although the organisations do have a system of guidelines, each federation can have their own variations of the minimal standards. “Junior” promotions are usually held within the school or local community, while black belts (and poom ranks) are usually awarded by the national federation and are internationally recognised.

The time necessary for a promotion depends on the school, the national federation and the rank in question. Lower ranks are usually attained after a few months (1-3) in rapid progression, while higher ranks usually require a certain period of time to pass before trying out for promotion.

There are some cases where promotion from rank one to rank two is given automatically, while other require a regular promotion. The period between promotions can range from one month to more than a year. Each school and/or national federation determine those periods of time.

An interesting question is whether ranks are interchangeable and recognised by opposing federations, i.e. does WT recognise ITF ranks and vice versa? The answer is yes – ITF degree holders can participate in WT events and vice versa – but due to political tensions and quarrels, the situation was not always simple and easy for the competitors.

We have already explained that black belts have nine degrees in total, which is why we won’t dwell on that question anymore. That system is simple enough. But, the “junior” degrees, that use different colours, are interesting as they show how the initial belt system, developed at the start of the 20th century, was incorporated into the sport of Taekwondo.

Since WT and ITF have somewhat different standards pertaining to “junior” belts, we will briefly analyse both systems:

The ITF system uses what we have already called a geup. There is a total od 10 geup in the ITF system and they start of from 10 and finish at 1. The system uses only five colours, with each colour having a higher degree variant, represented by a coloured stripe added to the main belt; the colour of the stripe is always the colour of the next degree colour (p.e. a second degree green belt has a blue stripe, because blue is the next colour in the system). The colours are as follows:

WT doesn’t use the geup system per se, but the general idea is similar. WT uses only ranks and each rank is, generally, represented by a specific colour; there are some variations of the same colour with the higher ranks. Most WT schools use the system presented below, but there are some slight variations around the world. WT has a total od 11 ranks obtainable before the red belt, ergo one more than the ITF systems. The colour scheme is as follows:

And this is the story of belts and belt colours in the martial art of Taekwondo. I hope you enjoyed our newest piece in a series of articles about Taekwondo and that you’ll be following us for more of the same.