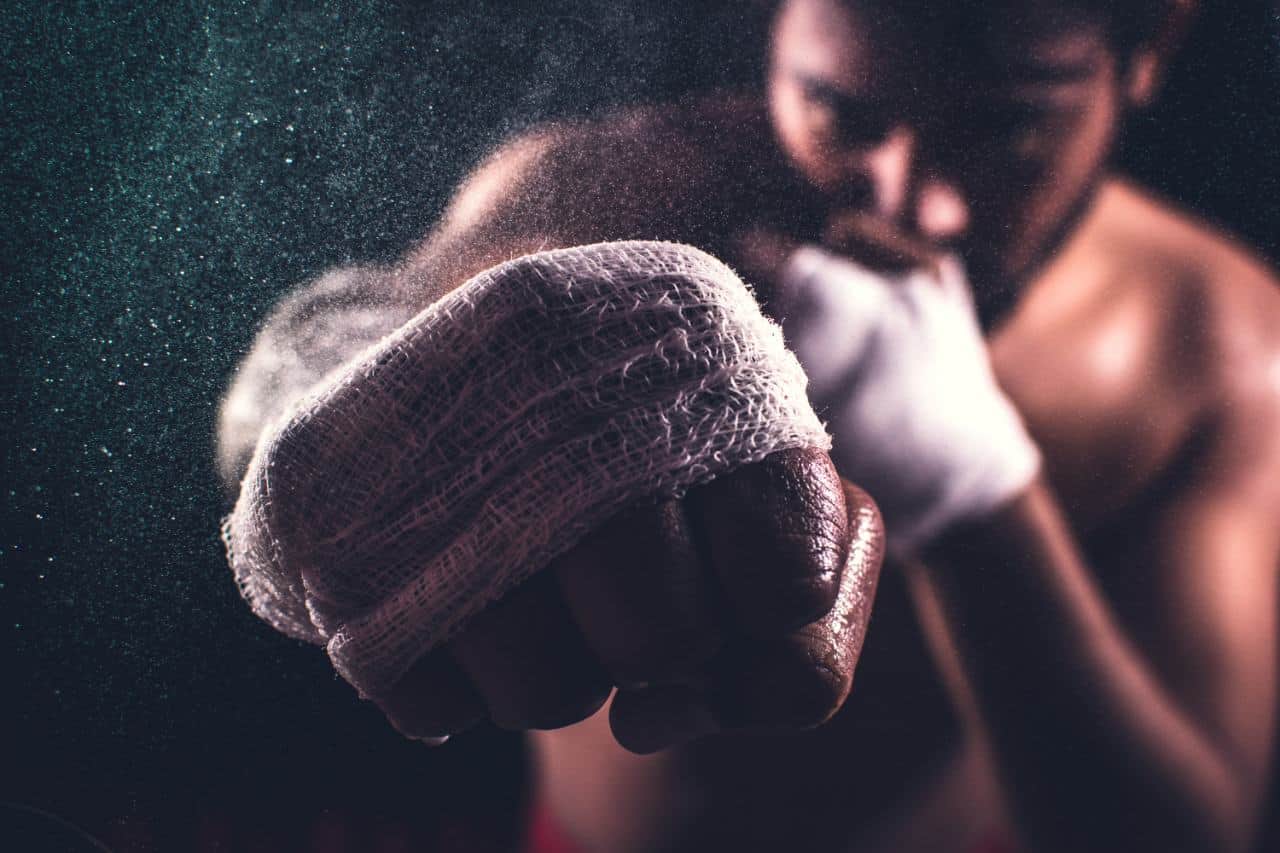 Continuing our series of articles comparing Muay Thai with other combat sports and martial arts, today we are going to compare it with the Israeli technique of Krav Maga. We’ve already talked about Krav Maga, which you may remember; if you do, you’ll instantly know that these two disciplines have very little in common, at least nominally. Well, in today’s article, we’re going to try and show you how you could compare them, what some common points are and – simply put – how Muay Thai fares against Krav Maga.

In general, Krav Maga is better for self-defense than Muay Thai simply because it was invented for the sole purpose of defending yourself. But, having knowledge of either of the two will help you a lot when it comes to self-defense.

Why exactly is Krav Maga better than Muay Thai, or any other martial arts when it comes to self-defense? What are the differences and similarities? We shall answer any doubts you may have in this article. So, let’s start.

The term “Krav Maga” (Hebrew: קְרַב מַגָּע) literally means “contact combat”, so you cannot give points to the Israeli for originality there, but – the story of how it all began is both terrifying and commendable at the same time.

Krav Maga was founded by Imre Lichtenfeld, a Hungarian-born Jew who grew up in Bratislava. He was a sports enthusiast, but during his youth, he spent most of his time practicing combat sports, even becoming a local wrestling champion. When anti-Semitic riots began in Bratislava during the 1930s, Lichtenfeld joined a group of street fighters organised to protect their Jewish friends from the rioting idiots.

While developing his ideas, Lichtenfeld managed to escape Europe in 1940, finally arriving in Mandatory Palestine, the predecessor of the modern state of Israel. There, he joined a paramilitary organisation and started teaching his self-defence techniques to soldiers and fighters.

In 1948, when the State of Israel was founded, Lichtenfeld became the official instructor of the newly-founded Israeli Defence Forces (IDF). Although he had already developed a basic system, Lichtenfeld continued to improve and upgrade his techniques during the 20 years he was in charge of instructing Israeli soldiers. He developed Krav Maga, which taught the soldiers both self-defence and hand-to-hand combat.

As we’ve stated in the introduction, it is very hard, if not impossible to compare Muay Thai and Krav Maga. Why? Well, Muay Thai is a martial art, a very sophisticated system of combat that includes both offence and defence. It is a fighting system whose main goal is to prepare the fighter for a one-on-one fight in a ring.

Krav Maga has none of that. Krav Maga is a self-defence technique, it can hardly be described as a martial art or combat sport at all. It consists of a series of exercises that are aimed at teaching you how to defend yourself in real life situations. Certainly, Krav Maga has its share of offensive moves, but the fact is that it’s predominant focus is on self-defence.

So, how do you compare two things that are essentially very different? Well, since we had a difficult task in front of us, we decided that we won’t be comparing them exactly, but rather present both disciplines to you separately, so that you can see how they function, what they each and everything else you need to know.

Finally, after explaining that, we will compare one aspect of these two disciplines – the only common point they have – and that it self-defence. Now, let us continue with our analysis.

The Basics of Krav Maga

Like most martial arts and combat sports, Krav Maga encourages students to avoid actual fighting. If, on the other hand, you cannot do that – either because it’s impossible or unsafe for you – Krav Maga will teach you how to finish it as quickly and as aggressively as possible.

Krav Maga’s offensive techniques are focused on your opponent’s most vulnerable body parts (e.g. the groin era and genitals) and are seldom restrictive, i.e. they don’t teach you how to go easy on your opponent. On the contrary, they teach you to be strong and efficient, and there are a lot of moves that can seriously injure or even kill your opponent.

Students learn to defend against all variety of attacks and are taught to counter in the quickest and most efficient way.

Some of the basic principles of Krav Maga are:

Training can also cover the study and development of situational awareness in order to ameliorate your understanding of your surroundings (so you can utilise them to your advantage), learning to understand the psychology of a street fight, and identifying potential threats before they actually occur. It may also cover ways to deal with physical and verbal methods to avoid violence whenever possible.

It also teaches mental toughness, using controlled scenarios to strengthen mental fortitude in order for students to control the impulse and not do something rash, but instead attack only when necessary and as a last resort.

Some of the techniques taught are:

The Basics of Muay Thai

We’ve already shown you the historical development of Muay Thai and how it functions. Now we are going to present some of the basic aspects of Muay Thai.

Traditionally, the stance in Muay Thai – one of the basic aspects of the discipline – is straightforward; the hips and the torso are completely straight, the chin is tucked in and the posture is completely straight. Because it depends on kicks, the stance in Muay Thai puts more weight on the back foot than the front foot; that is to enable for a faster and more powerful shot. This is important because Muay Thai fighters fight at a close range.

A fighter tends to stick close to his opponent and just linger around, waiting for his turn. They don’t jump around and rarely retreat, which why such a stance is both practical and practically necessary. As for the footwork, we can only say that Muay Thai is an art that requires patience. Thus, a fighter has to adapt his footwork to patiently follow the opponent and his movements in order to find the right moment to strike.

Muay Thai’s offence is based on utilising four parts of your body – the elbows, the knees, the fists and the legs. Let us see how each of them functions:

This covers the essential elements of Muay Thai. You’ve seen how it functions, what it focuses on and how its offence and defence work. As you can see from these two short summaries, Krav Maga and Muay Thai are really very different and it is difficult to compare them in these aspects, because their approaches to the discipline itself are completely different.

But as we’ve promised you – we will compare one common point of these two disciplines – the self-defence.

Conclusion: Which Is Better for Self-Defense?

Self-defence is the art of using specifically taught moves to defend yourself from an unwanted attack on your person. Although there are arts and techniques that specifically teach self-defence, most combat sports and martial arts include some degree of self-defence courses, Muay Thai included. So, how can Muay Thai benefit your self-defence?

Muay Thai has a more balanced approach than most other combat sports and a more complete one as well. Namely, Muay Thai utilises all extremities, meaning that the disadvantages other sports and arts have when legs are concerned are annulled in Muay Thai, which relies mostly on legwork, while – at the same time – using punches.

Muay Thai is also specific because it requires patience, meaning that it will teach you endurance, which can be essential when defending yourself. Muay Thai focuses on waiting for the right moment to attack and that can prove to be essential in a tight spot.

To conclude, Muay Thai will certainly help you with self-defence, but the fact is that its overly specific approach to fighting might influence your techniques and your approach to a real-life threat.

Thus, some other sports and arts (such as boxing, for example) might be better if you want to learn the basics of self-defence and practice it short-term, but if you have any long-term goals and wish to improve on what you have already learned, there is absolutely no doubt that Muay Thai is a good choice for you.

So, where does Krav Maga come into this equation? If you remember, we’ve already discussed the best self-defence sports and approached it in a previous article.

But, if you’re really interested in self-defence more than anything else, we’ll be brief – there’s no better thing than Krav Maga. Krav Maga started off and developed as a self-defence technique and its whole concept is based on practical defence. It teaches you everything, it teaches you how to adapt, but also how to be quick and effective.

There is no sport or art that offers a more complete approach to self-defence. So, if you’re really wondering what to take up for your self-defence – Krav Maga is the best choice you could make. It’s demanding and hard, but it’ll prepare you for what’s out there better than any other discipline.

And that’s it. That covers the basic differences between Muay Thai and Krav Maga, but also the one common point they gave – self-defence. If you want to train to become a fighter, you’ll certainly want to pick Muay Thai, while Krav Maga is the best option you could choose when it comes to self-defence.

The final decision is yours and we hope we’ve helped you at least a bit in making it. Follow us for more of the same and we hope we’ll see you back very soon. Until next time!