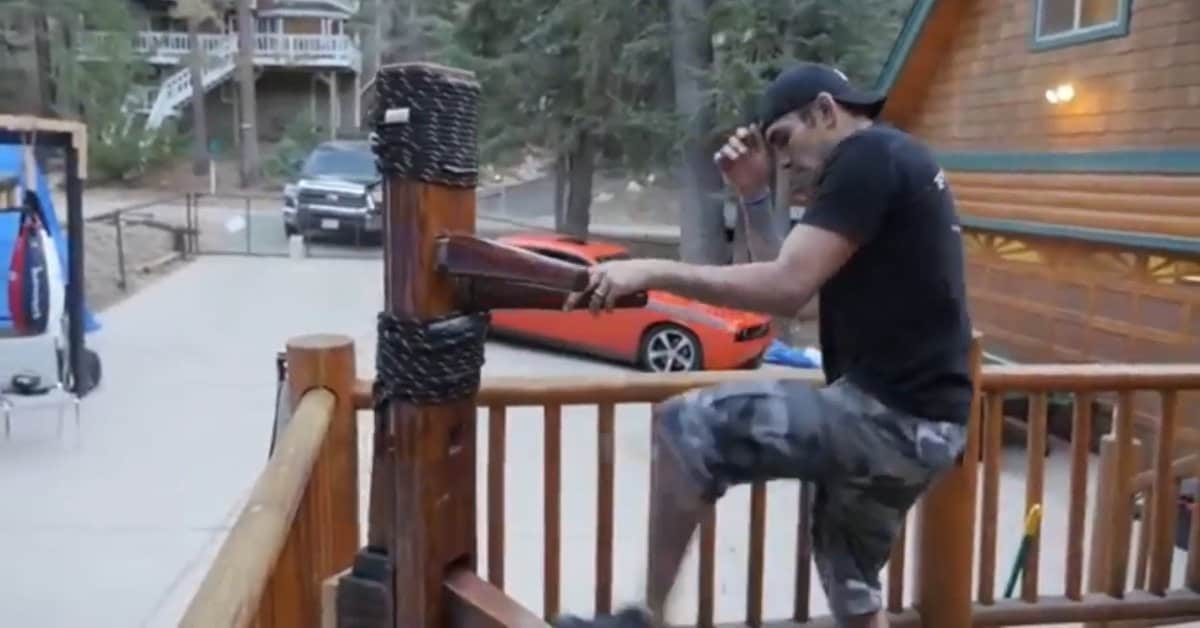 Those who practice any form of Kung Fu claim it’s the most effective martial art in the world, but we’ve seen that disputed, especially by MMA fighters.

They believe that it can’t be effective in an MMA fight, but there are still fighters using Kung Fu techniques in MMA, even at the highest level.

So, are there any fighters that use Kung Fu in UFC?

Many UFC fighters studied Kung Fu techniques and used them effectively. Weili Zhang, Tony Ferguson, and Zabit Magomedsharipov all had extensive Kung Fu training and use the methods in the fights. Also, there are fighters in UFC history who used Kung Fu, such as Roy Nelson and Chuck Liddell.

Saying that Kung Fu is trash just because you can’t use it alone against MMA is ridiculous. You can’t use any other martial art alone, as every art has holes.

That’s why UFC fighters use elements from many arts – to fill those holes and become complete fighters.

In this article, I will present everything you need to know about Kung Fu in the UFC.

Contents hide
Is Kung Fu Allowed in UFC?
Is Kung Fu Effective in MMA?
UFC Fighters that Use Kung Fu

Is Kung Fu Allowed in UFC?

Using Kung Fu in UFC is allowed to some extent, as with any other martial art you can think of. Some techniques aren’t allowed that exist in some forms of Kung Fu, such as eye pokes, groin shots, or elbows to the back of the head.

Therefore, you can use only some elements under the MMA rules used in the UFC.

That’s true for any other martial art as well. You have to adjust your techniques and use only the ones that don’t break MMA rules. That rarely happens, though, as MMA tends to have more liberal fighting rules than most other stand-alone martial arts.

Therefore, Kung Fu is allowed in UFC, but some techniques you can learn while practicing Kung Fu are strictly forbidden in MMA.

You can only use some Kung Fu elements in an MMA fight and leave the eye pokes, and throat punches out of the Octagon.

Is Kung Fu Effective in MMA?

We’ve all seen those viral videos where a so-called Kung Fu master gets cocky and challenges an MMA practitioner to a fight, only to get beat up silly. That gives out the impression that Kung Fu is phony and ineffective in MMA, which is absolutely not true.

As I said before, you can’t use only one martial art in MMA. That’s why it’s called mixed martial arts – you have to implement various martial arts techniques to be effective.

If you use only a striking martial art with no grappling skills, you’ll get taken down to the ground and battered like a ragdoll.

On the other hand, if you try to grapple with somebody and never shoot for a single punch or kick, a great striker will knock you out cold before you can ever take the fight to the ground.

You have to implement a little bit of both to be effective in MMA.

Kung Fu can be as effective in MMA as any other martial art. Of course, it has its holes, but so does boxing, BJJ, or any other art.

You fill those holes with techniques from other martial arts. Kung Fu teaches spectacular footwork and striking techniques that can help you a lot in an MMA fight.

Some techniques are ineffective in an MMA match, especially at the highest MMA level that we see in UFC.

Then again, kickboxing techniques such as ax kicks or Muay Thai tornado kicks are rarely seen in MMA, as they are too slow, flashy, and ineffective in an MMA fight.

That doesn’t mean every kickboxing or Kung Fu technique is unusable.

You can use Kung Fu in MMA not only for striking, but you’ll learn incredible breathing techniques to preserve energy while fighting and extensively train your footwork and evasive techniques.

To conclude, not every single Kung Fu technique is effective in MMA, but neither are all other martial arts techniques.

What you can use very effectively is quick striking, footwork, and breathing, so one could argue that not only you could use Kung Fu in MMA, but you should study it and implement what you learn into your fighting game.

UFC Fighters that Use Kung Fu

Many successful UFC fighters saw how valuable Kung Fu knowledge could be inside the Octagon, so they studied various Kung Fu forms and adjusted them to be effective in MMA.

Weili Zhang is a Chinese MMA fighter that currently holds the UFC women strawweight title. She is well-known for her prolific striking, but many people don’t know that many techniques she uses came from her extensive Kung Fu practice.

El Cucuy (a.k.a. Tony Ferguson) is known for his unorthodox style he effectively implements in his stand-up game. He studied Kung Fu techniques for a while and combined them with his high BJJ skills.

Dagestani fighters are known to have deep Kung Fu expertise. One of the UFc’s brightest rising stars, Zabit Magomedsharipov, is no different. You can see how he uses phenomenal footwork to set up both his attack and defense.

Sure, he is best known for his grappling, but what enables him to dominate in stand-up just as well as on the ground is his extensive Kung Fu knowledge.

One of the first fighters to show how traditional martial arts can work in MMA was Cung Le. He studied Kung Fu and Taekwondo at the age of ten and used that knowledge to his advantage when he stepped inside the UFC octagon.

The fighters I mentioned aren’t the only ones that used Kung Fu in UFC. Chuck Liddell studied Kung Fu extensively and became a UFC champion. Likewise, Roy Nelson stated that most of his stand-up game comes from studying Kung Fu.

It just goes to show that Kung Fu can be effective in MMA if appropriately used. It’s ignorant to say any martial art is useless because every art has advantages that make it unique.