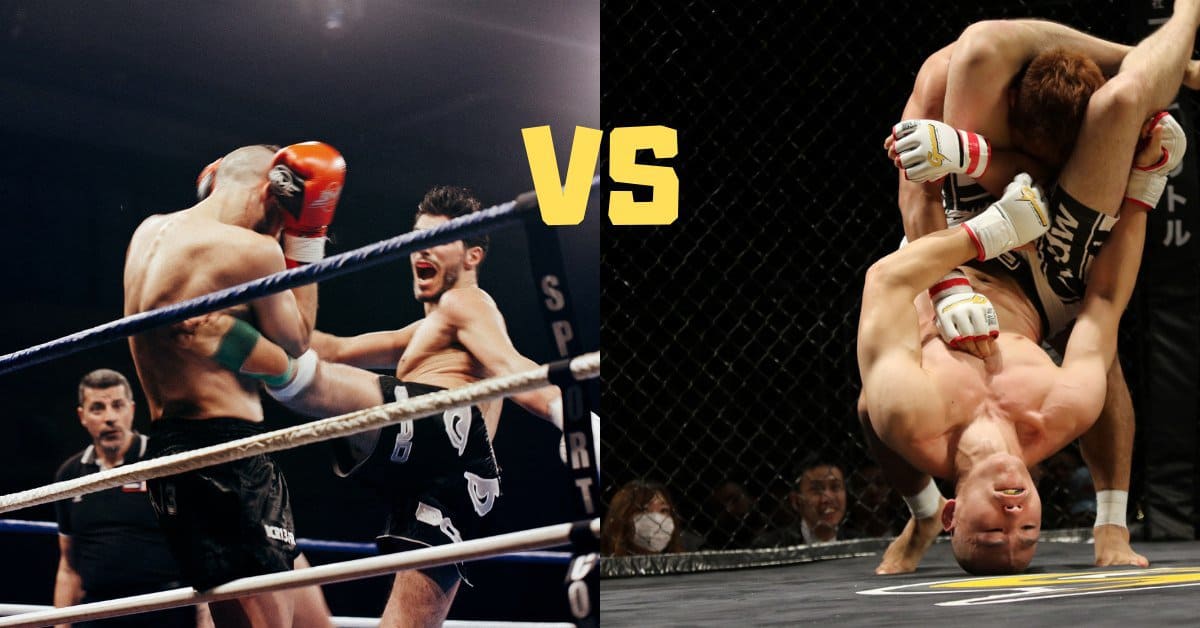 Kickboxing and MMA are two of the most popular fight sports in the world. That includes popularity among both the practitioners and spectators. Both of the arts are considered to be highly effective in free combat and for self-defense. But, although they have a lot in common, there are many glaring differences between the two. So, what are the key kickboxing vs MMA differences?

While kickboxing is a self-standing martial art, focusing on a specific, stand-up fighting ruleset, MMA is a combination of many different martial arts. Hence, the name, mixed martial arts. It includes various martial arts, such as wrestling, jiu-jitsu, karate, and kickboxing, too.

Determining which one is the better option for you will be easy once you know what the similarities and differences between them are. Also, your motivation and goals of training play a big part when choosing what you train. Is it self defense? Is it recreation? Do you want to compete professionally? How much punishment are you willing to take? Once you know the answers to those questions, you’ll know which one should you choose.

What are the differences between kickboxing and MMA?

There are many differences between kickboxing and mixed martial arts. The first crucial difference to understand is that kickboxing is a self-standing martial art that has specific disciplines and rulesets. It is purely focused on stand-up fighting, and any grappling moves, takedowns, or fighting on the ground is strictly off-limits.

MMA, on the other hand, is a combination of all other martial arts, put together into a single sport. Elbows, takedowns, submissions, and grappling is not only allowed, but necessary to be successful in an MMA cage. That is why many people say that MMA isn’t a martial art itself, but rather a fight sport that encapsulates many martial arts and squares them off against one another.

The fighters use skills and elements from a number of them to be as complete a fighter as possible, to be able to compete against all different styles. Kickboxing is only one of many martial arts you are allowed to use in an MMA fight.

To understand all the differences between kickboxing and MMA better, we’ll break them down into several categories: rules, technique, and equipment.

In MMA, virtually any strike is allowed, and any technique is a viable option, apart from eye pokes and groin shots. That’s why mixed martial arts are often referred to as Vale Tudo, meaning “anything goes” in Portuguese. Although, that’s technically not exactly correct, because Vale Tudo is a specific early version of MMA developed in Brazil.

Elbows, knees, and jiu-jitsu submissions are all crucial parts of MMA, and clinches are separated only if the fighters are inactive. The fights are most commonly set to three or five rounds, lasting 5 minutes each. You win either by knockout or submission. If neither fighter manages to achieve that, the fight goes to the judges that score the bout and determine the winner.

The rules of kickboxing allow only clean strikes with arms and legs while in a stand-up position. Also, elbow strikes are prohibited and penalized, while knee strikes are allowed in certain situations. Some disciplines allow short clinches, but most of them automatically separate every clinch and reset the bout from the starting guard position. That means there are no takedowns or submissions, as there is no grappling allowed.

Therefore, there are other ways to emerge victorious in a kickboxing bout. Knockout is the most obvious way to win. Then, there are knockdowns. As there is no ground combat, when a fighter is knocked down to the floor, but not knocked out, the referee gives him a ten count to recover, after which he’s allowed to continue the bout.

However, if the fighter gets knocked down three times in the same round, or four times during the bout, the match is over via technical knockout.

The matches are usually set to 3, 5, or 7 3-minute rounds. Similar to MMA, if none of the fighters achieve a knockout or a technical knockout before time runs out, a panel of judges scores the bout and determines the winner.

By now, it is clear that kickboxing prohibits ground combat, while MMA allows it. But, there are many more differences in technique that you should be aware of.

As kickboxing focuses strictly on stand-up fighting, it allows the fighters to be a lot more aggressive and light on the feet. You don’t need to worry about takedowns and grappling, which allows you to narrow down your defensive efforts and be extremely fast on counter-attacks.

MMA, on the other hand, requires a more reserved and careful stance, because there are a lot more threats you need to be aware of. If you get too light on your feet or get too aggressive, you’ll get exposed for takedowns and be forced to defend yourself with your back on the floor.

You need to adjust your defensive strategy and stance to be able to defend against various techniques, not only striking. That’s why all MMA fighters practice at least a couple of different martial arts, be it kickboxing, karate, jiu-jitsu, judo, or any other martial art you can think of that can be useful in a fight.

Finally, there is a big difference in equipment used in kickboxing and MMA. Both require a mandatory mouth guard, a recommended groin guard, and prohibit shoes in combat, but pretty much everything else is different.

A kickboxing bout usually takes place in a square ring surrounded by ropes, identical to a boxing ring. The fighters use large gloves that cover the fingers, and shorts. Many competitions require shin guards with instep padding, too, but those rules are usually associated with amateur competitions and WKF (World Kickboxing Federation) tournaments.

In MMA, the bouts are usually conducted in an octagon, or a similarly-shaped cage ring – which explains the synonym for MMA – cage fighting. There’s more space, and the shape of the ring makes cutting corners a lot harder, making fighters move around a lot more to avoid getting trapped.

The gloves are a lot lighter and thinner, and the fingers are uncovered, which is why there’s a high risk of eye pokes in combat. Amateur competitions sometimes allow shin guards, but it is not as common to see that as it is in kickboxing.

Which one is better for self-defense: Kickboxing vs MMA?

Kickboxing will give you all the tools necessary to fend off attackers, too, but your training will be focused on face-to-face, hand-to-hand combat. That puts you in a bad position against potential attackers that, for instance, attack you from behind with a choke.

MMA will teach you how to effectively escape certain holds and attacks from different angles and corners, and you will be able to respond not only while on your feet but if the fight ends up on the ground as well.

One great part about practicing MMA is the fact that you can focus your training on any martial art you want. You can, if you like, focus on kickboxing, while working on some grappling techniques on the side. That is actually what most of the professional MMA fighters do – they focus on a specific martial art as their base, and then develop different skills to complement their primary craft.

So, to answer the question at hand: both kickboxing and MMA will allow you to defend yourself very effectively, but if you compare the two side by side, MMA has a slight edge when it comes to being effective in a street fight or a self-defense situation.

Which one should you choose: Kickboxing vs MMA?

Choosing between the two sports depends on your motivations and ambitions. If you are planning to train recreationally and are looking to avoid unnecessary damage, then kickboxing is the right choice for you.

You can simply learn the techniques and skip sparring. It will get you to a certain level of skill to be able to defend yourself, but you won’t know if you are prepared for a situation like that if you never test your skills in sparring.

If avoiding damage is one of your conditions to practice a sport, then MMA isn’t for you. Even if you don’t plan on competing and only do light grappling exercises, the lighter gloves and friction while wrestling is almost sure to cause a bit of damage.

On the other hand, if you wish to compete and become one of the best fighters on the planet, both of these sports can get you there. Ultimately, it all depends on what you prefer, and which of the two do you find more appealing.

Kickboxing is for those who like fast action, clean contact, and fighting on their feet. There are a lot of people that find grappling boring, so they opt for kickboxing instead, because the action is often much faster, and the striking is a lot more attractive.

But, if you enjoy more of a free fighting style with fewer rules regulating and prohibiting techniques, then you should try out MMA. It is undoubtedly one of the hardest fighting sports in the world, if not the hardest, as it combines all the best elements from every single martial art, so mastering it will surely make you an apex predator.