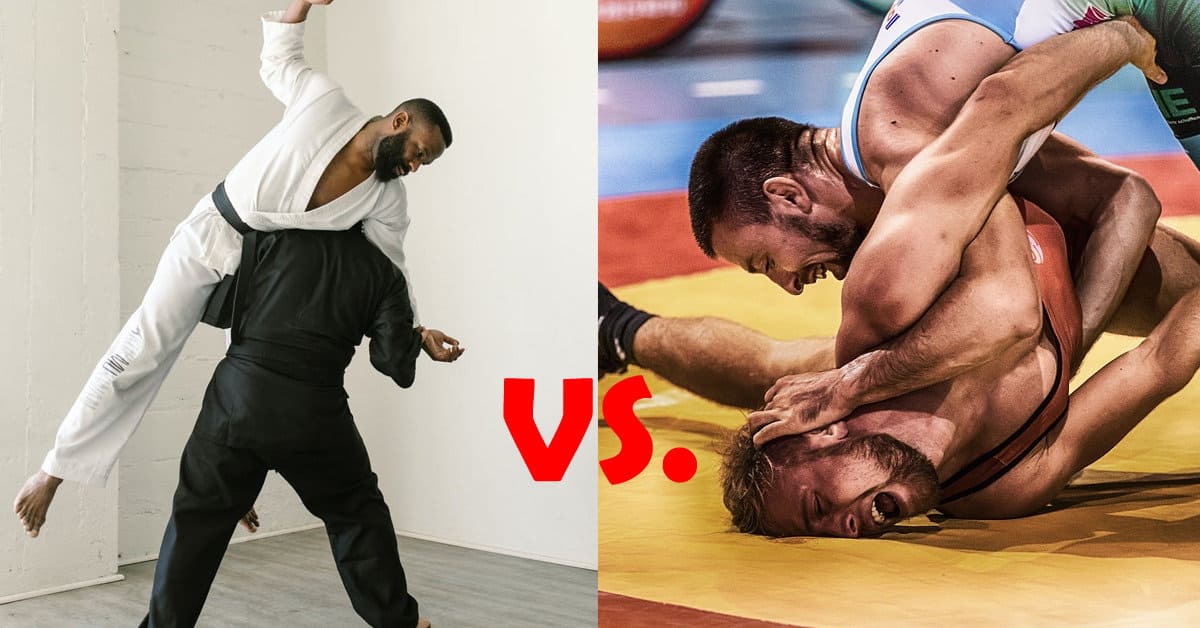 Judo and wrestling are both grappling martial arts, where striking your opponent isn’t allowed. There are many similarities in techniques used and ways to win.

However, they are entirely different sports, and we can see both of them in the Olympics. So, what are the main differences between judo and wrestling?

The main differences between judo and wrestling stem from the attire in which the fighters are battling. Judokas wear a gi, while wrestlers wear a tight one-piece suit. That makes the grip a lot easier in judo because you can grab your opponent’s jacket and control them.

All techniques, grabs, and throws stem from the fact that you have to apply a different grip to control the opponent because of the clothing.

Apart from the technical differences, there are also distinct rules and various ways to win a match.

What Are the Differences Between Judo and Wrestling?

As I mentioned before, judokas and wrestlers fight in completely different attires. That might sound unimportant, but all the differences stem from what the fighters are wearing during the fight.

It influences their technique, their attack methods, and the way they control their opponent. Control is the most crucial factor in any grappling martial art, so these two are no different.

Judokas wear a traditional Japanese gi with a belt around their waist. The gi consists of trousers and a jacket, which fighters use to grab and throw their opponent.

Some techniques also allow holding the belt, but you aren’t allowed to grip the trousers. Also, fighters have to be barefoot when in combat.

On the other hand, Wrestlers wear a tight one-piece suit, which makes grabbing your opponent by his clothes is impossible.

Even if you could manage to grip the suit, it would most likely be sanctioned. You need to assert control by controlling the opponent’s arms and upper body instead of grabbing the clothes.

Finally, wrestlers wear boots instead of being barefoot.

As gripping is easier in judo, the techniques focus on quickness and pull’s instead of strength and body weight.

To go over every possible technique in each sport to conclude the differences is unnecessary. I’ll group them into categories to make it easier to understand what differs between the sports.

Both judo and wrestling start on the feet. So, the first category I’ll discuss is the throws. In judo, throws are the primary way to win.

Almost all of them are performed after grabbing the jacket or belt of your opponent. If you manage to land your opponent on the side or the back, you scored, which means the fight is either reset or finished.

In wrestling, that is rarely the case. The fight continues on the mat after you throw your opponent down.

Takedowns are performed by controlling the opponent’s upper body with under-hooks or over-hooks or with leg takedowns. Using leg grabs is forbidden under current judo rules.

A fight can continue after going to the ground in judo, but it happens a lot less frequently than it does in wrestling.

Once the fight goes to the ground, pins are a common way to win in wrestling and judo.

However, there’s a big difference in how to perform a pin.

In wrestling, both opponent’s shoulders have to be on the mat for the pin to count and only for three seconds.

In judo, you have to hold the opponent down for twenty seconds to end a match, but only one shoulder has to be on the mat at all times. That rarely happens, though, because if a judoka turns on the stomach, the fight is reset back up.

Other than pins, you can apply submission holds to win, too. However, depending on the type of wrestling and the competition’s ruleset, the available techniques can be limited.

When on the ground, wrestling doesn’t allow submission holds, such as chokes, arm-locks, etc. You score the same amount of points for every takedown leading to you being in control on the ground. The only takedown worth more points is the one that leads directly to a pin.

Judo values every takedown technique differently. Therefore, some methods will get you a win after performing them only once, while other techniques will require repetition.

As the fight goes to the ground in wrestling, you’re grappling to obtain control, not to choke the opponent or perform any other submission. The goal is to score more points or to pin the opponent.

Wrestlers tend to look to take the fight to the ground quickly because you can also score points by pushing the opponent out of the fighting area.

In judo, on the other hand, submission holds are very usual. If a fight doesn’t end with the takedown, judokas can perform holds to make the opponent submit.

If that does happen, they automatically win the match. Arm-locks are the most commonly seen techniques for submission holds in judo, but chokes are often used as well.

You can even use your opponent’s gi to perform choke-holds on an opponent. That’s why judokas often turn to the stomach quickly and avoid losing the match on the mat.

That’s something you’ll never see in wrestling. To give your back to the opponent means you’re letting them win.

To conclude, there are many similarities in techniques and ways to obtain victory between judo and wrestling. But, there are even more differences setting them apart.

While judo focuses on agility and quickness, wrestling takes a lot more energy and strength to endure.

There is also a lot more grappling and grinding, whereas, in judo, the fights are reset back on the feet a lot more often.

Ultimately, when choosing which one to start practicing, determine what your preferences are.

If you want speed and agility, go with judo.

But, if you want to bulk up and gain strength, there’s no better martial art to do so than wrestling.