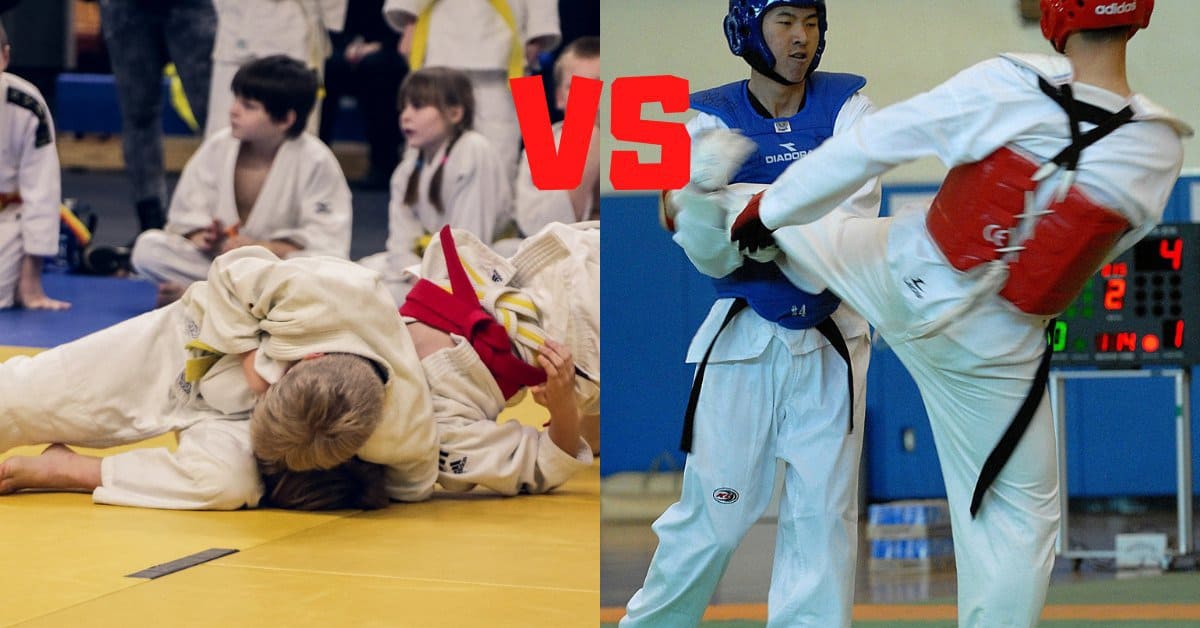 When researching martial arts and looking for one you might want to train, you will notice that there are more types of martial arts and substyles than most people would think. A Japanese or Chinese person might even understand what the names of these arts mean, however, the average Western individual will have no idea, and it is quite easy to get lost between all the Japanese, Chinese, and Korean martial arts names. In this article, we will shed some light on two very popular martial arts, Taekwondo and Judo, and we will dissect their history, and what makes them different from one another.

Their histories connect in some points, however, like for almost all Eastern Asian martial arts. Both of these styles are still rising in popularity, even though they have always been some of the most popular. Almost every city or town has at least one Judo and/or Taekwondo dojo, so if you also have one nearby and you need some information to be able to decide which one to train at, this article is meant for you, so read on!

What Are the Differences Between Judo and Taekwondo?

The main differences, and all differences subsequently, arise from the history of specific martial arts. Their history and path to worldwide popularity are often what shapes the style and give it its iconic feel and image. If you want to learn more about the traditional martial art, or if you want to be able to decide whether the dojo near you is legitimate and authentic, you need to know some of the martial arts’ histories.

Judo is a martial art with a history somewhat longer than most other modern, official martial arts from Asia. Its founder it Jigoro Kano, a Japanese martial arts legend, developed martial art towards the end of the 19th century and has also become one of the leading figures in the Shogunal government. He developed Judo as a way to replace Jujutsu, which had a dying reputation in his time, and was in some cases even actively forced out of common practice.

Judo is characterized by hard body-throws and joint-locks. Its basis is the Japanese Jujutsu, which is the precursor to today’s Jiu-Jitsu and is an effective grappling art. In Judo, the gi (martial arts clothing) used is usually a lot thicker than karate gis, and also has reinforced stitching in multiple places to resist the wear-and-tear of the hundreds and thousands of Judo throws that will be executed while wearing them. There are barely any kicking and punching techniques, and even the ones that exist in Judo are more like feigns and range-checking, not actual attacks that deal with substantial damage.

Taekwondo has its origins in Korea, and it was created in a joint national effort by the 9 original Kwons (martial arts schools) as a means to unify the martial arts trained in the country. The main figure in this unification process was a Korean army general called Choi Hong Hi. He is also credited with coming up with and writing down his Theory of Power, which was an effort to use rational thinking and Newtonian physics to describe and create the foundational basis of a highly effective and powerful martial art. Aside from ideas on balance, energy preservation, and proper striking technique, he also talks about how speed is more important for the power of a strike than the mass of the striking object is.

As a result of the Theory of Power, Taekwondo uses legs for a majority of its techniques. Aside from having the largest muscles on the human body, the legs also have the characteristic of being able to travel a lot faster than arms can, even though it doesn’t seem intuitively true. When extending the legs and kicking with a rotation from the hips as well, simply because the foot is further away from the center of the rotation, it can reach speed much higher than a fist, which has a more straight trajectory.

Which is Better for Self-defense: Judo or Taekwondo?

Martial arts were created and are trained by all people as a means to defend oneself or one’s family and loved ones. This is why we believe it is every martial artist’s duty to use the internet and all other information sources available thanks to globalization, and compare martial arts in terms of their self-defense effectiveness. Everybody’s ultimate goal would be to have a martial art that everyone could use to defend themselves properly, but since that is impossible, we can at least try to find the best martial arts available to us right now.

First of all, we have to clarify, that the street and real-life self-defense scenarios are not what the movies show. It isn’t so controlled, it isn’t easy, almost everyone gets super stressed out, adrenaline is pumping, etc. You don’t have time to think about the movements and techniques you have learned and execute them perfectly. All you have time for is to instinctively react and use the techniques which have hopefully burned into your muscle memory to defend yourself. Also, the priority is to avoid all physical altercations at all costs. There are some situations, unfortunately, in which you just cannot avoid physical conflict, and in those cases, you better have a good martial art have your back, otherwise, you might end up in the hospital, or even dead.

SO, out of these two, which one would win in a street-fight? Well, that mostly depends on the individual, their training level, and the specifics of the situation, since even you or any untrained person can knock out Mike Tyson if he isn’t looking your way or expecting it. However, if we are talking about the most realistic fight scenarios, there is quite a clear winner out of these two, and it might come as a surprise.

Though when watching videos, Taekwondo might seem like the art better suited for self-defense, Judo takes the win in this category in our opinion. The margin is small, but it is still there. So, why does Judo win? Quite simply because realistically, most fights end up being grappling and wrestling competitions. Unless the person who hits first knocks the opponent out or manages to keep a distance, the fight usually ends up being very short-distance, full of clinches, knees, elbows, chokes, throws, and what have you.

If you are a practiced Taekwondo fighter, you won’t have trouble defending yourself, don’t worry. Even in close-range, there are some techniques that can get you out of trouble, however, if you are a Judoka, all you need to do is close the distance, or wait for your opponent to do so, and you have probably secured a victory. A spinning hook kick might be more visually shocking, but trust us, if you perform a proper Harai-goshi throw when your opponent starts pulling at your shirt, they won’t be jumping up to run after you anymore.

Which One Should You Choose: Judo or Taekwondo?

So, out of the two, which one is the best decision for you? Which one should you start to learn? Well, that depends on more factors than you would like to think, and unfortunately, your passion isn’t the most important one.

After the many Bruce Lee and Jackie Chan films, martial arts spread like wildfire over the Western side of our globe. The enthusiasm of newcomers was welcomed by the masters, but there were also people, as always, who wanted to and still want to exploit this. Many dojos, especially in the USA, Canada and Russia, tend to be so-called McDojos. These are the same thing for dojos as McDonald’s is for real hamburgers: a cheap copy, which won’t give you anything of substance.

The most important thing when deciding the martial art you want to learn is making sure your dojo isn’t one of these money-centered McDojos. However much you would like to train Krav Maga much more than Jiu-Jitsu, or Goju-Ryu Karate over Boxing, you should always choose the best school near you, not the best art. The reason for this is that you could take the best art in the world and still not learn anything useful only because the intentions of the dojo owners and masters are not what they should be.

If we assume that there is no such problem, we would recommend Judo over Taekwondo, since we believe there is a higher chance you will a) find a legitimate Judo dojo and b) learn something that you can easily use on the streets as well to properly defend yourself or your family. You will also learn how to fall properly, which is a great skill to know, regardless of the martial art itself. However, we must clarify, that if you have a high-quality Taekwondo dojo nearby, we would recommend that as well, and you can’t really go wrong with it.