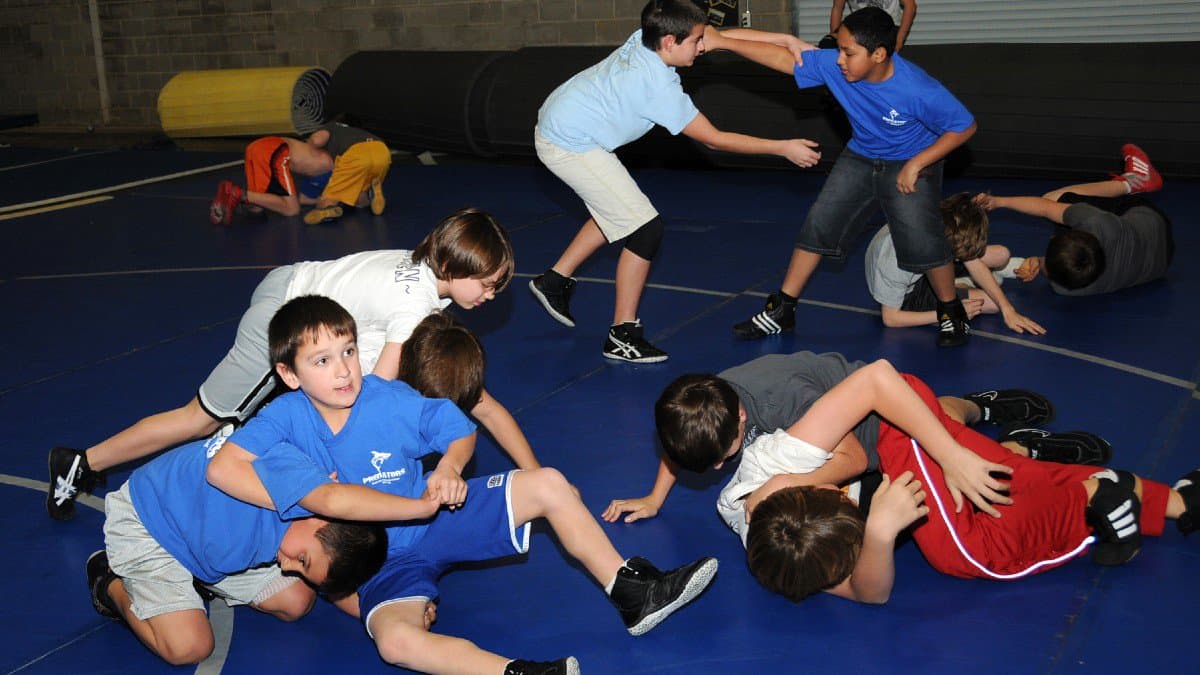 Kids like wrestling because it is fun, and it is not hard to get them into it. By doing so, they meet other children, spend time together, and have a great time.

Keep reading our article to find out how to get your kid into wrestling.

The basis of wrestling is overcoming falls that can help when landing in other sports, but more importantly, in daily activities to avoid injury.

It is one of the few sports that affect all motor (coordination, speed, strength, balance, flexibility, agility, endurance) and functional abilities, which prevents possible body deformities.

Combat sports help channel aggression and thus play a role in preventing violence. Through wrestling games, children improve their motor skills, and they put in place strategies that will allow them to gain confidence and assert themselves in real life.

Kids like wrestling because it is fun. By doing so, they meet other children, spend time together, and have a great time. It is a known fact that children learn through play, so they learn various moves and skills through interesting games.

What Age Should a Child Start Wrestling

Some parents find that wrestling is too aggressive for young children and that it is best to start with it in high school.

According to the author of the booklet “Parent’s Guide to Youth Wrestling,” Bill Campbell considers the beginning of wrestling for children depends on several factors. These factors include a child’s interest in wrestling, personality, and physical ability.

Children can start wrestling between the ages of 4 and 5, but it all depends on the maturity of the child.

Physical activity is important in the development of children. But if we talk about a strong and extreme level of activity over a long period, negative effects can occur that affect the growth of children.

Children who engage in extreme sports where the emphasis is on calorie restriction and high energy expenditure are at the highest risk for stunt growth.

” inadequate nutrition during the prepubertal period leads to delayed puberty and stunt growth.

Children who engage in wrestling are often faced with unhealthy weight loss to qualify for competitions. Depending on the child’s diet and exercise intensity, the child’s growth may be slowed or stunted.

According to a study published in the “International Journal of Sports Medicine”, the researchers found that a significant reduction in fat and weight was observed in wrestlers.

Is Wrestling Good or Bad for Kids and Why

It has been proven that wrestling improves coordination, flexibility, and strength.

When children play sports where only one muscle group is involved, they are at risk of long-term injuries, and it can also affect their growth. But when children engage in sports such as wrestling, which emphasizes all muscle groups, the activity is physically beneficial.

By allowing a child to engage in wrestling, it lays the foundation for success in later life as they learn at a young age how to be disciplined and work hard. Another advantage wrestling offers to children is the acceptance of victory and defeat.

That is, the child learns to take credit for what happened on the wrestling mat. The child becomes aware of his successes and failures.

Being able to take personal responsibility for both victories and losses is a trait that will help children when they grow up. Also, by developing wrestling skills, children acquire skills that they may need for all other sports in later life.

Wrestlers are known to have functional strength, balance, agility, and flexibility. One of the questions that constantly arises is whether wrestling is aggressive and whether it encourages violence.

Wrestling can be aggressive, but it is by no means violent and does not incite violence. This sport does not allow hitting, also violent behavior is followed by strict penalties or even disqualification. The goal of all this is not to destroy the opponent, but to defeat him.

If you have read our whole article, you certainly know that wrestling is fun and great for kids.

It is one of the few sports that affect all motor (coordination, speed, strength, balance, flexibility, agility, endurance) and functional abilities, which prevents possible body deformities.

It can’t be problematic if you sign your kid for competition wrestling at a young age, but you don’t have to do that, you can go for a normal wrestling training that will a lot of fun for your kid.