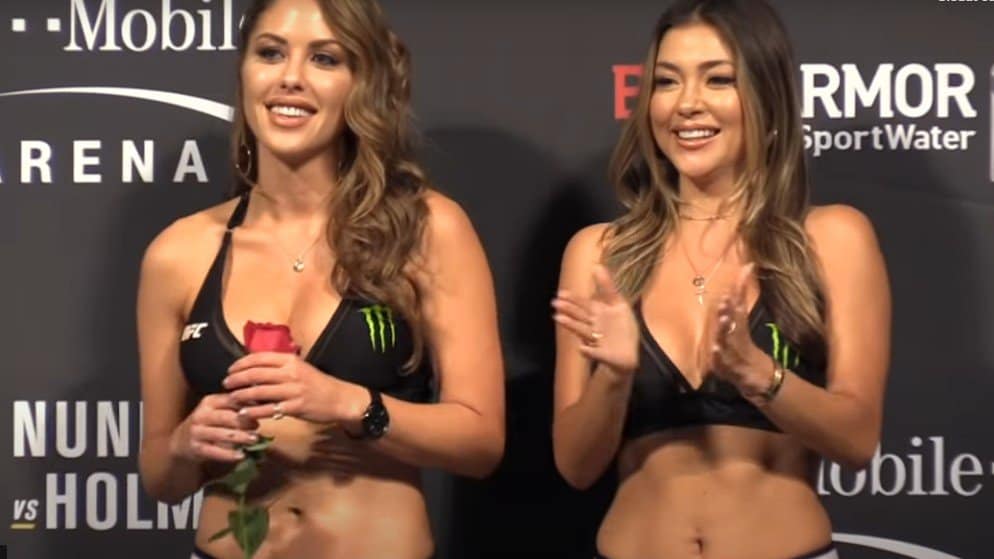 In between every round in the UFC fight, ring girls are the ones who carry a sign with the number of the round that is about to take place. The question of how much do UFC ring girls make for that often arises.

In this article, I pulled up some numbers regarding the pays UFC ring girls get, and made a list of 7 highest paid UFC ring girls. Let’s take a look!

Before we get into the number, you might want to check out our list of 20 hottest UFC ring girls. 🙂

How Much Do UFC Ring Girls Make per Fight?

Sportkz has revealed that top UFC ring girls earn about $1000 in fight fees and an additional $5000 for PPV events. But, their annual earnings are much diferent.

UFC ring girl with the biggest annual earnings is by far Arianny Celeste, with about $1 million a year. That is more than 25% of MMA female fighters earn.

As you will see below, their annual earnings don’t only come from being ring girls for the UFC.

Bear in mind, UFC never shares the financial details of their staff and fighters, so these stats don’t have to be completely correct, but I tried to make them as close as possible.

As you can see, with more than 3 million followers, the most paid UFC ring girl promotes all and everything, so it is not so surprising she earns that much.

Even though she is best known for being a UFC ring girl, she is also a co-host on the TV show Overhaulin’ and a model featured in Playboy magazine.

Celeste has modeled for magazines such as Maxim, FHM, Playboy, Sports Illustrated, and Fighter’s Only Magazine.

Maxim voted her “The Hottest UFC Octagon Girl” in 2010, and she also posed nude for the November 2010 issue of Playboy, which was one of the top-selling issues that year.

Her estimated net worth in 2021 is somewhere around $3 million.

In the second place we have Camila Oliveira. She’s a rising star as an MMA and UFC ring girl.

When she was 16 years old she started modeling, and she is still doing it.

Oliveira doesn’t have nearly as big a base of followers as Celeste, but I am sure some of her annual earnings come from that as well.

It is reported that her estimated yearly earnings are somewhere about $50,000. This does not include her photoshoots session and advertisement appearances.

She is best known for her work as an Octagon girl for the UFC, and was awarded Ringcard Girl of the Year for 2012 at the World MMA Awards and again in 2013.

She also appeared at the cover of Playboy magazine, and became the third girl to do it.

Even though her annual earning as a UFC ring girl is reported to be somewhere around $30,000, I believe she earns much more.

She has a huge following on Instagram, with more than a million followers, so she certainly earns from other sources as well.

Chrissy Blair is a UFC ring girl and a model. She has a decent Instagram following of about 200k.

Chrissy made an appearance on the main cover magazines “GUESS, Sports Illustrated, and Maxim”. According to sources, she holds a degree in graphic design and fine art and also got experience in branding and marketing.

With all that education and experience in branding and marketing, I believe she earns much more than only those $30,000 as a UFC ring girl.

Carly Baker is a model and personal trainer most famous as a ring girl for UFC.

She was also a pageant contestant in the Miss Great Britain competition and has become a social media influencer with more than 260,000 followers just on Instagram.

Her UFC annual earnings are reported to be somewhere about $30,000, but I am sure she makes much more with advertisements, endorsements, modeling, and such.

She is also the Co-Owner of the yoga studio Olive Yoga in Long Beach, CA. But most importantly, she is one of the top-paid UFC ring girls.

She has worked with clients such as GQ, Maxim, FHM, Self Magazine, Cosmopolitan, Heineken, Tory Burch, Jaguar, TJ Maxx, Joico, and Nasty Gal to name a few. So, we can be sure that UFC isn’t her only source of income.

Rachelle Leah (born August 20, 1984) is an American model and television personality. She has also worked as a glamour model in mixed martial arts.

Leah has also been featured on the covers of numerous magazines, some of which include Maxim, Men’s Fitness, 944 Magazine, Playboy, Steppin’ Out, Muscle & Fitness, AXL, Vegas Magazine, and Stuff.

She took a break from an Octagon Girl but continued hosting UFC All Access on Spike, which airs a week before the UFC pay-per-view event. She returned to the Octagon at UFC 111 on March 27, 2010.