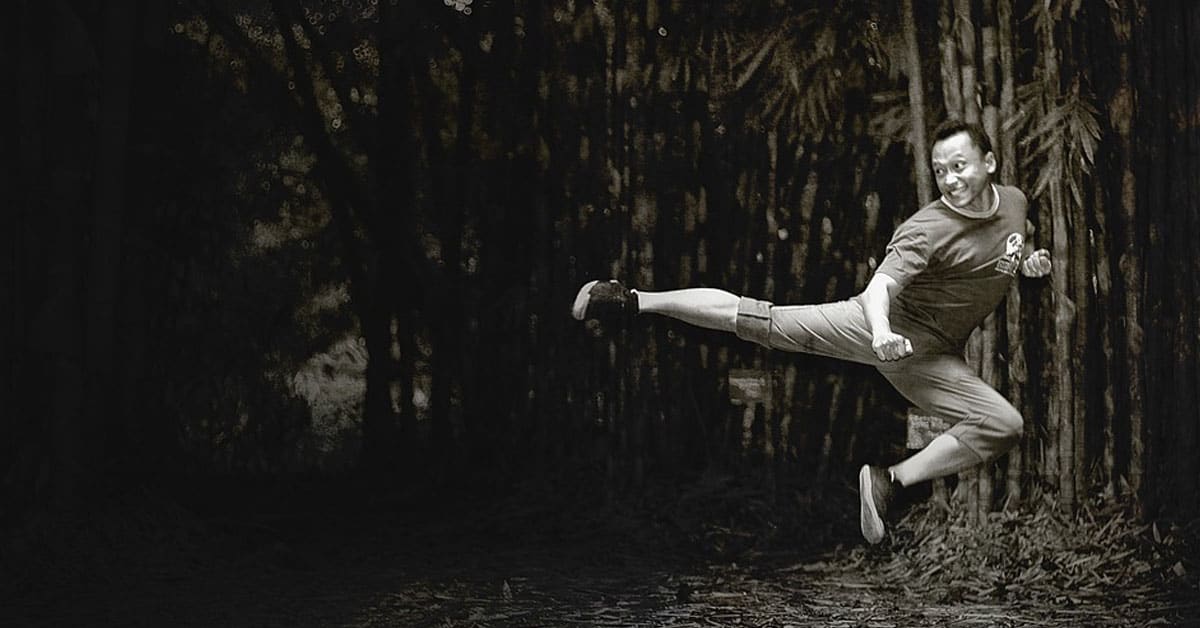 Taekwondo is an insanely popular martial art. Many MMA fighters, stars in the UFC like Valentina Schevchenko or Bas Rutten all got their first black belts from Taekwondo, which just further amplifies the hype over the martial art. Also, ever since Bruce Lee movies and The Karate Kid came out, al martial arts styles have been gaining in popularity, with taekwondo being one of the most successful ones. However, not everyone has the option of attending a Taekwondo school regularly, either due to a lack of nearby dojos or out of financial reasons. This is when many enthusiasts of the art probably ask themselves: can I teach myself Taekwondo?

To a certain extent, one can teach themselves Taekwondo at home, however, it is never going to be as authentic and good as learning in a dojo would. If the question is “Can I learn some Taekwondo moves alone?”, the answer is: possibly. Learning the whole art is impossible alone.

It is hard to learn anything on your own from the start, especially if it is a complicated topic. If somebody tells you they have learned a new skill or a language on their own, without taking any classes and only using the internet, you would probably be amazed at their perseverance. Martial arts are probably one of the hardest things you can learn alone since it is based on fighting and a master showing you the mistakes you are making. So is it possible, and how much can you learn alone? Read on to find out!

Is Taekwondo Easy to Learn Yourself?

Taekwondo is a complicated system of self-defense, which takes years or even a couple of decades to master, and that is in a dojo, regularly attending classes and learning from a good master. So, how hard is it to learn Taekwondo when you are alone at home, watching videos off of the internet?

In short, Taekwondo is insanely difficult to learn on your own. In this section, I will discuss why that is so, and I would like to start with the simple fact that you don’t have a master/professional to check your individual movements.

Imagine trying to learn cooking without spending a day in a professional kitchen, next to a seasoned chef (pun intended) who can tell you the ins and outs, and also what you are doing right or wrong. That is almost as difficult to do, but still not as difficult as learning Taekwondo.

The problem is that people look at Taekwondo as a hobby like any other, or like an average activity, like biking or jogging. However, it is far from the average hobby. It is more like trying to paint beautiful artworks from scratch, except you are doing everything with your own body.

Going with the painting or cooking analogy, we can easily spot a difference between those hobbies and martial art which is crucial in terms of their difficulty to learn autonomously. This difference is the subject and object of the activity. To simplify, when you are learning how to cut up an onion, you are the subject carrying out the action on the onion, which is the object. The action is performed on an external object, and the movements have clear results (cut onions into quarter-inch by quarter-inch cubes).

None of this is true for learning Taekwondo, or any martial art for that matter. In the beginning, you wouldn’t be sparring much, especially not if you train from home, so basically, all you would be learning is kata-like sequences and shadow boxing/kicking. In this case, you are both the subject and the object of the activity, and the results are really, really vague. There is no given end-result, like with chopping an onion. The movement has to be carried out by you, with attention to every single detail that you can’t possibly do on your own.

Without an experienced teacher or master to correct you, you will not be able to reflect on the problems you were facing while training since you will have noticed much, much fewer mistakes than you actually made. This is why, if you want to learn Taekwondo at home, be ready for a really tough and long journey with not much fruit at the end.

Should You Learn Taekwondo Yourself?

The question which follows logically from the previous section then is: should you learn Taekwondo yourself? Is it worth the hassle?

Taekwondo is a highly beneficial form of exercise, movement, and brain training as well, so training it is definitely worth a lot of hassle. If you happen to pick this as your martial art of choice, don’t let superficial things stand in your way of training it (it is 2 miles away instead of 1…). However, training alone at home is not a superficial reason not to learn TKD, since it can be more harmful than productive.

One of the main problems with training martial arts at home is that the lack of immediate expertise from an older student or instructor basically means you need to learn months and years of material just to start out on the journey.

In short, I wouldn’t recommend anybody to learn martial arts by themselves, especially not acrobatic and technical ones like Taekwondo. There is a very high risk of injury and a very low chance of succeeding this way in art.

However, if you are really feeling motivated, you can start and you can reach certain small goals, but don’t expect to become the next UFC champion, or even to be able to defend yourself properly. I have trained Aikido for more than 2 years, and even after two years of learning in a relatively reputable dojo, going home and practicing by myself was quite a rare thing. The reason for this way that I couldn’t see what I was doing wrong, even when I was trying my best. Of course, I could practice the techniques I was already good at, but learning anything new on your own… I wouldn’t advise it. However, this leads on to my final point of discussion…

How to Learn Taekwondo Yourself?

If you are still convinced about starting to learn Taekwondo alone at home, here are some basic things you should keep in mind before starting and while training.

First, let’s start with the mindset. It is very important when you start learning a martial art at home, that you do not start being confident, and that you are aware of the drawbacks of your situation. You have to be aware of the fact that you will not learn at even half the pace that a regular student learns at and that you might never actually perform a movement properly until an instructor or master sees it.

Going in with an overconfident mindset will ruin the whole experience and the process since you will think that you are capable of things you aren’t, and the realization of this (which will come sooner or later) will destroy your motivation most probably. Stay real about it, stay honest about it.

Now for the more physical aspect of it: warming up is one of the most important things you can do, especially for TKD. As I have mentioned, I have trained in Aikido for a while, and I can tell you that though warming up does wonders, even without such warming up, I could easily perform a bunch of techniques and not be injured or winded. However, when it comes to such physically demanding fighting styles as TKD or Muay Thai, warming up thoroughly is probably the best thing you can do to avoid some serious injury.

Another important aspect of training at home is listening to your body. Not in a woke nonsense way, but in a way that you understand what your body is going through. If you are learning a sidekick, and you think you are executing it with perfect technique but your hip hurts after 3 tries, you are either doing it wrong, your body isn’t flexible or warmed-up enough, etc. Be aware of any pain, any imbalance, any joint pains especially, since these will both show you whether you are properly training the techniques (properly executed movements shouldn’t hurt the joints, they are supposed to be natural), and it will also prevent injury.

Last, but definitely not least, focus on the basics. As we have mentioned, you shouldn’t go in with unrealistic and overly confident or enthusiastic intentions, because you will want to progress as fast as possible to the flashy kicks. However, learning to perform even the simplest of kicks properly is a challenge without an instructor, let alone advanced stuff. Stay within your lane, do not hurry, and focus on the basics. The basic strikes, punches, blocks, stances (stances especially), etc. are the techniques that will give you the basis to be able to successfully train TKD should you ever get into dojo training.

Most importantly of all, as an “umbrella-tip”, I would like to emphasize one thing again, and that is safety. Martial arts are inherently violent and dangerous, so if you decide to train it alone, make sure you and everyone around you are safe. Once that is ensured, good luck with the process!