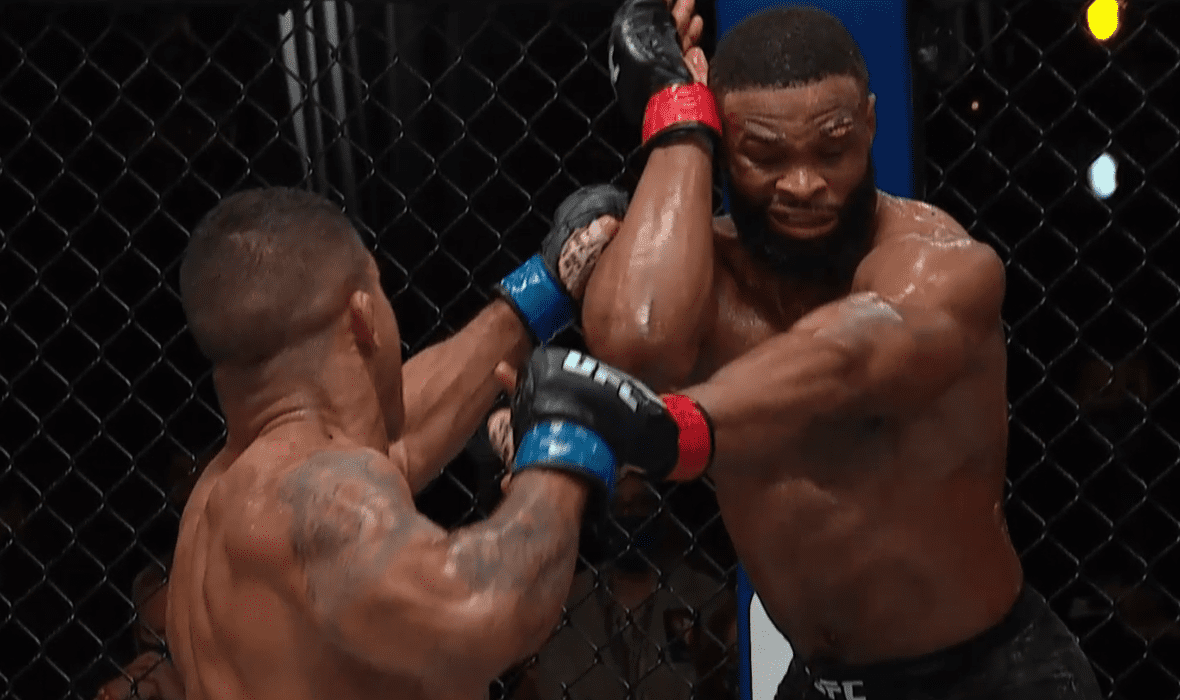 The UFC on ESPN 9 event brought us a new serious challenger in the welterweight category. The 33-year-old Brazilian Gilbert Burns impressed with his performance in Las Vegas and after 25 minutes in the main fight of the evening convincingly defeated Tyron Woodley for whom this was his first appearance since March last year when he was stripped of his title at UFC 235 by Kamaru Usman.

Burns made a great combination right at the start of the opening round and shook Woodley. The Brazilian then aggressively continued with a knee and a few uppercuts knocking down the former champion. Burns was already chasing a finish in those moments by attacking his opponent with a ‘ground and pound’, but Woodley somehow manages to survive the first five minutes, but he also takes something to remember them by in the form of a large cut above his left eye.

Woodley recovered later and showed some of his combinations in the second round. The rhythm slowed down a bit, and in the middle of the round Burns successfully knocked down Tyron, but Woodley returned to his feet and remained in a clinch with his opponent until the break.

In the third round, they are both a bit more careful, but Burns is the one who presses and who has the most important moment when he hits with his right hand and briefly throws Woodley off balance. The former champion in these five minutes was mostly trying to launch that one real shot that would turn the fight in his favor.

The start of the fourth round brings us one successful Woodley throwdown defense that turns into a clinch fight. The fighters are at the fence at the moment, and due to a lack of activity, judge Herb Dean separates them at one point. The continuation of the match brings a much more aggressive Burns who, with a series of attacks at one point, hits more seriously with manual techniques and briefly knocks down Woodley. Shortly afterward, the fight moves to the ground floor where Woodley successfully defends one choking attempt.

Despite a convincing advantage on the cards, Burns puts pressure in the last five minutes in which we see a lot of fights from the clinch, but also several great combinations from the Brazilian who recorded his sixth victory in a row in the APEX complex.

In the co-title match of the evening, Augusto Sakai defeated Blagoy Ivanov by a split decision of the judges. The heavyweight bout was awarded to the final winner by two judges 29-28, while one attributed all three rounds to the defeated Ivanov. With this win, Sakai equaled Francis Ngannou with whom he shares the current longest winning streak in the UFC heavyweight division.

Mackenzie Dern reached her third victory under the auspices of the UFC and made history in Las Vegas by beating Hannah Cifers in the middle of the first round with a ‘kneebar’. It was the first ‘leg-lock’ submission in the history of the UFC’s women’s categories.

In the introductory part of the program, former challenger Katlyn Chookagian defeated Antonina Shevchenko, the sister of the more famous UFC champion Valentine, by a unanimous decision of the judges.

Jamahal Hill has reached his second win since joining the UFC. ‘Sweet Dreams’ defeated Klidson Abreu by technical knockout in the first round and thus further improved his record to perfect (8-0).

Check all the results below:

Daniel Rodriguez vs. Gabriel Green the unanimous decision of the judges (30-27 x3)