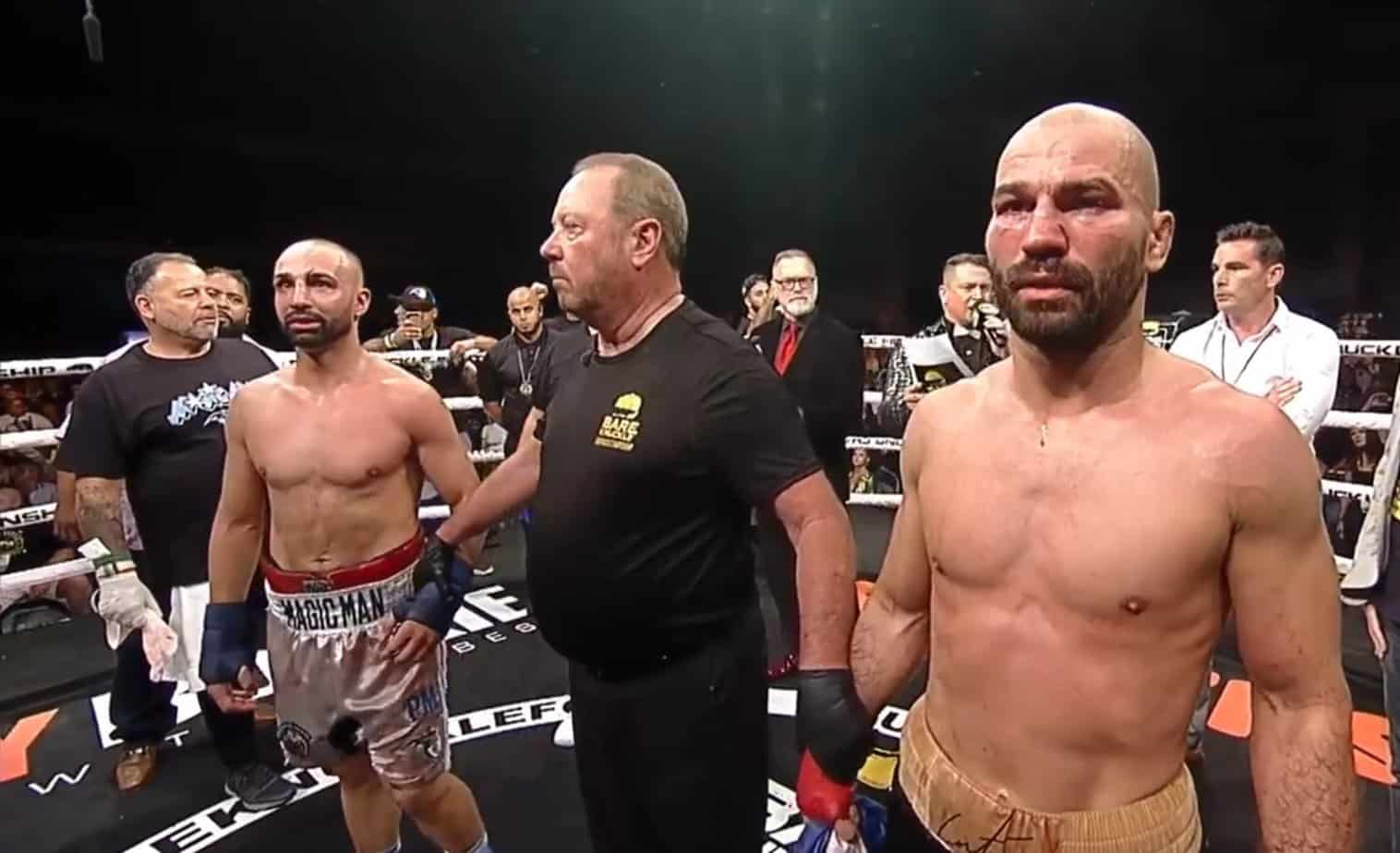 Bare-knuckle boxing is a combat sport, a form of boxing where fighters don’t use gloves and fight with bare knuckles.

Although it is the predecessor of modern boxing, bare-knuckle boxing is today mostly illegal and there are only a few promotions in the United States and the United Kingdom. But, since it’s a rising phenomenon in the world of martial arts and combat sports, we’ve decided to dedicate one article to bare-knuckle boxing and bring you everything you need to know.

The History of the Bare-Knuckle Boxing

Most people know that modern boxing started as a bare-knuckle sport, but what most people don’t know is that the first boxing match ever recorded was held in England in 1681 between the footman of the Duke of Albemarle and a local butcher; the local butcher, who won this bare-knuckle fight, was a local champion of some sorts as he was well-known for his fighting skills. Sadly, we don’t know them since this is the only record of his pugilistic career.

Fast forward some 30 years later and you get the world’s first bare-knuckle boxing champion, James Figg. Figg was champion until his retirement in 1730, but is also credited as a very important figure in the development of modern boxing. Bare-knuckle boxing was the most popular combat sport in the West for nearly two centuries, when it was replaced by regular boxing at the end of the 19th century.

During that long period, the longest ever bare-knuckle match was held in Australia in 1855, when James Kelly faced Jonathan Smith. Kelly eventually won after 17 rounds in a match that lasted an incredible 6 hours and 15 minutes.

Some years later, fighter Jem Mace started his professional career that lasted more than 35 years; he was well into his 60s when he fought his last exhibition match in 1909. Bare-knuckle boxing was, at that time, overshadowed by regular boxing.

Interestingly enough, although popular and widely practiced, bare-knuckle boxing was, even at that time illegal in the United States, but the British had a different approach. It is now considered that the last big bare-knuckle boxing match was held in 1889, when John L. Sullivan beat Jake Kilrain. As you might know, Sullivan was also the first heavyweight champion in regular boxing.

The sport did continue to exist even after 1889, but as regular boxing, which was much safer and had firmer rules, rose in popularity, bare-knuckle boxing slowly, but steadily headed for the history books.

Initially, bare-knuckle boxing had no rules whatsoever and you can certainly imagine how a lawless fight between adrenaline-pumped looked like. It was, of course, pure chaos.

There were no rounds, no weight limits, not even a referee. The fighters fought in the circular ring (the shape of the ring was probably the only rule was firmly in place) until one of them couldn’t continue fight anymore. That was certainly dangerous, but we were not able to find out whether and how it was fatal.

A lack of rules also resulted in a lot of very dangerous punches, which are today strictly illegal, being allowed. Such are eye-gouging, choking, throws, headbutts, etc. Some fights would last so long that there was a bigger chance the police or the overlooking crowd would break it up than it finishing regularly.

Generally speaking, original bare-knuckle boxing was more of an MMA technique. It combined a lot of martial arts and combat sports into one composite unit, which allowed for a plethora of different influences for punches and techniques. Some of them are today considered too dangerous and are banned even in the most extreme combat sports.

A codification of the rules came in 1838, when the famous London Prize Rules entered into power. The LPR is a very famous document in the history of boxing and is considered the first codification of boxing rules ever. It limited a lot of the earlier liberties the fighters had and, thus, bare-knuckle boxing became a proper sport and not just a form of vulgar street fighting.

Many people considered bare-knuckle boxing to be a form of street fighting, but the truth is that they are and were worlds apart. Street fighting never had any rules. It was just a fight between people, not an art, not a sport.

Bare-knuckle boxing was and still is a sport, despite its controversial status, and it has a lot of followers in the world today. A famous example is that bare-knuckle boxing strongly prohibited punching a downed opponent, which is completely “regular” in street fighting.

When asked about Bare Knuckle Fighting Championship this week Conor McGregor replied: “It’s wild stuff, Artem has a couple of those bouts, a couple of my former foes or foes I was supposed to fight have ventured into it so I’ve been watching it closely. It’s an exciting game, it’s a little bit damaging. No matter what, you’re either getting cut up or your hands are bust up, it’s a very vicious game. Although the MMA game is not much different, it’s a wild sport, it’s very exciting, thrill-seeking sport and I’m very happy I’m involved in it. If you’re asking if I’m interested in it, most certainly, I’d give it a shot, of course. Why not? Definitely.” – Conor McGregor The Sun Newspaper (LINK IN STORY)

How Dangerous Is Bare-Knuckle Boxing?

One major concern when bare-knuckle boxing is its controllability. The other is its brutality. We’ve already talked about the former (see above) and have deduced that bare-knuckle boxing has its rules that have to be respected and that it, despite its limited recognition, isn’t just another street brawl between two people. So, it is controllable… up to a degree, but it really isn’t as chaotic as it might look.

The issue of safety is, we have to admit, a bit more complex. Namely, most modern martial arts and combat sports have at least some form of protection. Taekwon do has a full set of armour, MMA has very simplistic gloves, while boxing has the famous gloves. Bare-knuckle boxing, on the other hand, had absolutely no protection and that was the goal.

Namely, although modern boxing always emphasizes its ancient roots, it is a fact that ancient boxing was much more savage and natural than the heavily defender modern version of the sport.

Bare-knuckle boxing also drew its inspiration from Ancient Greece, but opted for a more direct imitation of the ancient source. Ancient boxing was also fought without equipment and protection and that’s that the organises of bare-knuckle boxing decided to do to.

The question whether bare-knuckle boxing is safe is a complex one. Nominally, the sport is far more dangerous than a lot of its peers, but since it is controllable, major issues can be avoided. Certainly, bare knuckles, without any amortisation usually given by wearing gloves, are far more dangerous for the head and some of the internal organs, but you cannot forget about the damage done to the hands.

Certainly, there are ointments and powders that can ease or prolong the bruising, but it is a fact that fighters have to be more careful when bare-knuckle boxing is concerned than with other combat sports. That doesn’t mean that the former ones are completely safe and danger-free, but since you have protection, the risk of serious injury is smaller to at least some extent.

Bare-knuckle boxing is not extremely popular today, but it is a rising phenomenon in the world of combat sports. Some have compared it to MMA and the UFC; the sport and the organisation also started very slowly, practically as an underground event for extreme fighters yet is today one of the most popular and lucrative sports in the world.

When MMA started, it was a new discipline, relatively unknown to the world. It had a point zero that was literally that and it developed through the decades to become legal around the world. But people didn’t know what MMA was when it first arrived, but they do know what bare-knuckle boxing is and they do know how serious it can be.

Bare-knuckle boxing has been around for more than 400 years and people have learned a lot about it and its dangers, which is one of the reasons why it’s prohibited and considered illegal in most of the world.

There are a few promotions in the United Kingdom and the United States, but a majority of states still considers it to be illegal; the first state to legalise bare-knuckle boxing was Wisconsin, that did it in 2018. A few other states have followed since.

It is difficult to foresee how the story of bare-knuckle boxing will end. On one hand, it’s slowly rising in the world of combat sports, but on the other – it is potentially very dangerous. Due to its aggressive nature, bare-knuckle boxing is still illegal in practically every place on Earth, with a few notable exceptions.

But, even if we don’t know what this will end, we know that the organisations responsible for bare-knuckle boxing will have to answer a lot of safety-related questions before the sport becomes an everyday phenomenon.

If you have any questions unanswered and want to learn more about bare-knuckle boxing, take a look at one similar article we wrote about the sport which will answer the rest of your questions.